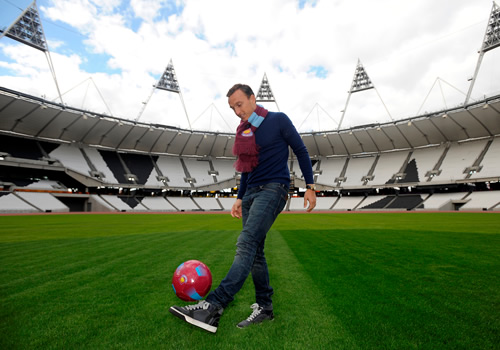 Mark Noble in the Olympic Stadium in Stratford Photo: whufc.com

Mark Noble has made history by becoming the first West Ham United player to kick a football in the Olympic Stadium as part of a new video set in the iconic landmark that will become the east London club’s home in 2016.

In the video, Noble documents his two-mile journey from his home town of Canning Town to the world-famous stadium in Stratford and recalls his childhood memories of supporting the club.

The Academy graduate and former Hammer of the Year also discusses both the fantastic transport network and surrounding entertainment facilities on offer near the Queen Elizabeth Park that Hammers fans will be able to enjoy when watching their team play.

Once inside the Stadium – which will undergo a transformation to a 54,000 all-seat Uefa Category 4 venue, the highest category of football stadium in the world – Noble steps up to take the first-ever penalty in the Hammers’ stunning new home.

“It’s a privilege to be the first West Ham player to kick a football inside the Olympic Stadium and as a lifelong West Ham fan it was great fun to film the video,” said Noble.

“Hopefully I will be one of those players walking out of the tunnel soaking in the atmosphere, with 54,000 West Ham flags and banners waving. The noise is going to be amazing and it’s going to be a fantastic stadium to play in. 2016 just can’t come quick enough.”