Wimbledon 2013: Andy Murray reaches the final for the second year running with a dramatic win over Poland's Jerzy Janowicz 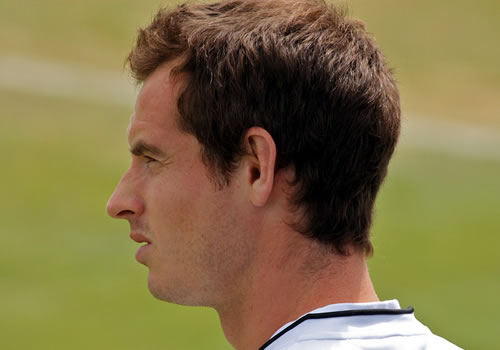 For a tennis fan, the scene could not have been better as Andy Murray prepared for his fifth Wimbledon semi-final in row, hopes to reach his second consecutive Wimbledon final.

The hot sun beat down on the most famous, most elegant, most traditional of tennis tournaments in the world, and the place just glowed.

There was not the packed frenzy of the first week: By final Friday there are fewer matches, fewer players, fewer courts in action. But the buzz was palpable as hoards of ground-pass holding fans, with Pimms and sun-cream in hand, packed Murray Mound: Union flags and best voices primed.

There was not quite the emerald finish to the rectangles of grass arrayed down the gentle slopes of the All England Club—they have been worn at the edges into thinned, fading beige—but the grass was, as every other morning, mown to perfection, its white lines repainted with geometric precision.

And the hero of the day was, of course, Murray himself—and he has been bearing the burden of expectation well, carrying the pressure lightly.

For while he was still be aiming for that first Wimbledon title for a British man since Fred Perry in 1936, Murray had already equalled Perry’s record for the most Grand Slam semi appearances by a British man, now into his 13th.

Murray has also become the most successful British man in Grand Slam history by winning his first-round match, No107, and was enjoying a 16-match grass-winning streak.

And for the many who packed the All England Club, this streak, along with his final finish at Wimbledon and Olympic gold and silver last year, was enough to fill them with hope.

Many, though, would be unfamiliar with the name or the quality of the young No24 seed he faced, Jerzy Janowicz. Even those who did recognise the name, and knew something of the rise of this 6ft 8in Polish talent, may not have predicted Janowicz as Murray’s semi-final opponent, for this was only his fifth appearance at a Major. But on his debut here last year, he reached the third round as a qualifier. He went on to reach the final of the Paris Masters, also coming through qualifying, to take his ranking from 221 at the start of 2012 to 26 by its end. Next week, he will be No17.

And what the many who also crammed Courts 2 and 3 might not know was that this young Polish man met and beat Murray during that Paris run. So Murray had done his homework:

“I followed him a bit this year…He’s a big guy with a lot of power. He also has pretty good touch, he likes to hit drop-shots. He doesn’t just whack every single shot as hard as he can.”

He was not wrong. For such a tall man, Janowicz moves with speed, balance and fluidity. He happily attacks the net, plays drop shots, and naturally pounds one of the biggest serves in tennis.

Even so, it was Murray, opening serve in what had become an evening match after the record-breaking first semi, who led the ace stats and serving stats: six among his 71 percent first serves. He knew he had to take the attack to this dangerous man, and certainly attempted to do so, but it was Janowicz who got to the net most often, and made 12 points compared with just five from Murray.

Certainly the error count from the Pole was higher—he plays the kind of first-strike tennis that can produce big error numbers—but he fought off a couple of break points in the 10th game to push the set to a tie-break.

And for the first time in the set, Murray looked vulnerable, which enabled Janowicz to take a 3-0 lead. Murray rushed to the net, but put an easy volley long: It was 4-0. Murray pulled back to 2-4 but the Pole thumped two forehand winners for set points and Murray obliged with a double fault to lose the tie-break, 7-2.

Time for the crowd to play their part, and they did so with gusto. Murray broke in the very first game, but almost rued missing another break chance in the fifth. He faced a break point after another volley error—survived—and faced three more in the eighth game, but some big serves saved the day and he took the set, 6-4.

Still Murray was out-acing and out-serving his opponent, but Janowicz’s errors were still letting him down, a sign perhaps of his inexperience. He seemed too eager, too rushed, and notched up 15 of them in the 44-minute set.

But Murray, too, was making uncharacteristic errors, and two of them brought up break points on his opening service game: first a netted volley, then a long forehand. Again, his serve comes to the rescue—three straight aces.

It seemed to get under Janowicz’s skin and he berated the umpire at the change of ends about the light: “It’s too dark for me.” There was no response on when the roof may be closed. Instead, Janowicz channelled his anger into a brilliant game of sliced returns, capped by a touch-perfect angled volley to break Murray, and the Pole held for a 4-1 lead.

The crisis seemed to refocus Murray. He held to love, and then broke with a wonderful passage of play that countered the touch and variety of Janowicz. Another hold from Murray, and the Pole became livid with his own errors. He smashed the top of the net in fury, double faulted and conceded another break.

Murray quickly served out, 6-4, nine aces for the set, 17 winners and just two errors. No wonder he was so unhappy at the decision to halt his momentum—a five-game run—and close the roof.

Amid the debate about whether there was enough light left to continue play—and it certainly looked more gloomy inside Centre Court than outside it—the players left court, returned for 20 minutes, warmed up, and it became suddenly clear that Murray was in mood to hang around.

Chalk it up to experience—to ‘carrying the burden lightly’—and to this being only the Pole’s second Wimbledon and first semi-final, but Murray dominated from first ball to last.

Sure Janowicz held his opening serve, but he was broken on the next and never came close to breaking Murray. The Briton sailed through his serve, channelling any anger into his best tennis of the match, perhaps of the tournament, to drop just two points on serve. He made not a single unforced error in the remaining 35 minutes of play.

The 6-3 set took him to his fourth consecutive Grand Slam final—he did not play at Roland Garros—and this third against long-standing friend, Novak Djokovic.

“It will be a tough match: He and del Potro played an incredible match—great rallies. We’ve played once on grass before, at the Olympics last year. I’ll take that thought into my head on Sunday.”

He should. At London 2012, Murray beat Djokovic before beating Roger Federer to win the gold medal. Now gold of a different kind is within his grasp: that famous Wimbledon trophy.