Wimbledon 2013: Andy Murray reaches the quarter-finals for the sixth year running after a straight-sets win over Mikhail Youzhny 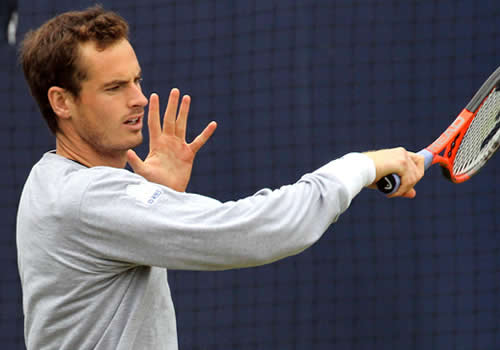 There is no doubting the change of mood around Andy Murray since he began his campaign back on Centre Court less than a year after thrilling his public with Olympic gold.

When the draw was made, the mood was tinged with gloom. If Murray was to reach the final, as he did last year, he would have to beat Jo-Wilfried Tsonga and then either Roger Federer or Rafael Nadal.

Within days of the tournament beginning, though, all three of the big names in his half were gone. Not only that, by second Monday, the fourth round, there were only two other seeds in his half, both in the 20s. The mood was looking up.

But there was also a change in mood around Murray himself. This year’s model was more relaxed, more confident, less concerned about expectations—indeed thriving on the vociferous support of the home crowd. Murray had shown, last summer, both his tears and his winner’s temperament, and Wimbledon had taken him to their heart.

Murray, this Saturday, reunited with his fellow Olympians at the All England Club to mark the anniversary of London 2012, and he described his run to gold in the singles and silver in the doubles as “the best time of my career—yes it was ahead of the US Open.”

Now he was riding a 14-match streak on grass, beginning with that gold-medal run, advancing through Queen’s for the title, and then through his first three rounds here. Along the way, he became the most successful British man in Grand Slam history with a total of 109 wins.

With nothing left to prove, no wonder Murray looked a different man.

This year, his seventh time in the fourth round of Wimbledon, he had not even dropped a set thus far. However, he was not complacent about former world No8, the smart Mikhail Youzhny. For the wily Russian, an elegant all-court player, has one of the best grass records on the tour. Only last month, he pushed Roger Federer to three sets in the final of Halle, and he was a quarter-finalist here last year.

Murray acknowledged: “He’s a very good grass court player. He was in the final in Halle. Had a very tight match with Roger there. He’s been in the second week numerous times. He likes the courts. He’s a very talented guy.”

And the first set was certainly high quality, both men trying to take the initiative, both playing aggressive, forward-moving tennis, and the winners piled up: 15 for Murray and 13 for Youzhny. But Murray’s serving was the dominant force—he dropped only four points on his first serve in the 48-minute first set and the break of serve he stole in the third game was enough to see carry him through the 6-4 set.

The second set was even more competitive, a 72-minute feast of flair and shot-making. Murray used drop shots and lobs to pull his opponent out of position, but Youzhny showed wonderful touch around the net.

This time, when Murray broke in the third game, Youzhny clenched his jaw and his fist, and broke back. Always an animated player, the Russian ran to the change-over, urging himself on, and he certainly produced the goods in the next few games to outplay his opponent at baseline and net.

Murray seemed temporarily thrown off balance, netted a couple of returns and Youzhny broke to take the lead courtesy of a double fault from the Briton. Emotions were now running high, and Youzhny channelled his into some great strikes down the backhand line to hold serve, 5-2.

But as has so often happened before with the Russian, his aggression almost becomes too much to contain. He overhit from the baseline to offer up break points to Murray, who eagerly snatched his chance with a backhand well beyond the reach of Youzhny. The crowd went wild and Murray went wild, and in a unique replay of the Olympic atmosphere, a clapping chant went up: “Andy, Andy, Andy…”

Murray almost broke again, playing a couple of near-perfect lobs and teasing his opponent to the net, but Youzhny held and they headed to a tie-break.

This proved to be the climax of the match, a feast of skill and variety. Murray aced, Youzhny pulled off a leaping smash winner, Murray made an inch-perfect drop shot winner, and then a serve-and-volley play. The finest shot was saved for last, a screaming cross-court return of serve from Murray: He took the set, 7-5.

Each had attacked at every opportunity, Murray winning 17 points from 24 at the net, Youzhny 19 from 28—and both made twice as many winners as errors. But Youzhny was in trouble. He took a medical time out between sets for his right shoulder and could find little more resistance to a Murray in full flow.

The Briton recorded just one error in the third set, a double fault, broke three times and took set and match in 31 minutes.

He admitted it had been tough but was pleased with his finishing.

“It was a tough match, the first couple of sets especially, but once I got ahead in the third I concentrated hard on not letting him back in like I did in the second set. I don’t take anything for granted. I know how hard these tournaments are to win. There are no guarantees here and I don’t come into them thinking I am going to win.

“I think a few rounds ago I was more nervous, but today I felt calmer before the match. I just concentrate on each game. Serena lost today; Roger has lost and Rafa has lost, so you cannot take anything for granted.”

Murray next plays Fernando Verdasco, who reached his first ever Wimbledon quarter-final with a straight sets win over Kenny de Schepper.

Verdasco has not played Murray for four years, but scored his only win in nine at the Australian Open in 2009 in five sets.

“My first quarters: I’m happy to be here. In the next match, is going to be a special match because is going to be against Murray here in Wimbledon in quarter-finals…I know is going to be a tough match. He’s No2 of the tournament. He’s a great player, one of the best players in the last years on tour. You need to have faith and try your best to try to win.”

Verdasco has been as high as world No7 but has struggled with form of late—until he stepped onto the grass. It is, in truth, hard to see him halting the Murray juggernaut.

However, a potential semi opponent is the fast-rising huge talent of 22-year-old Jerzy Janowicz, who beat Murray last autumn at the Paris Masters. He came through a long five-setter against Jurgen Melzer and will expect to beat the 130-ranked 31-year-old Lukasz Kubot, who has reached his first ever Grand Slam quarter-final with a marathon five-set win over unseeded Adrian Mannarino.

In the now top-heavy Djokovic half of the draw, the No4 seed David Ferrer reached the Wimbledon’s quarters for the second straight year, and No8 seed Juan Martin del Potro reached his first Wimbledon quarters—and he, like Murray, has yet to drop a set.