Wimbledon 2013: Andy Murray beats Novak Djokovic to become the first British man since Fred Perry in 1936 to triumph at SW19 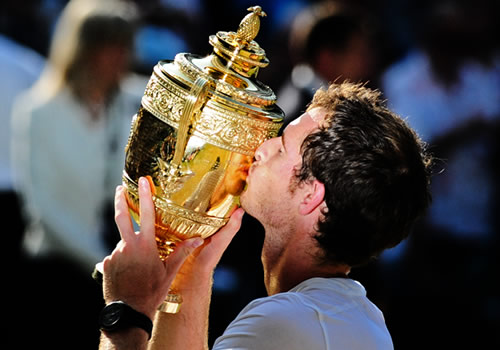 Sealed with a kiss: Andy Murray holds the trophy after beating Novak Djokovic Back Page Images

In the pitch-perfect, traditional environs of the All England Club, they don’t go in for side-shows, for hyped build-ups, for high-volume resumes and pounding music.

Here, the stars of the show are the tennis, its most immaculate and tended stage—and the white-clad gladiators.

Those lucky enough to have tickets for the climax of “The Fortnight”, drawn at random in the ballot, had all paid the same price: £130. The majority, though, had turned up to sit on that hill, or to fill Court 2, sporting crazy hats, perfect picnics, Union Jack blankets and a spring in their step—all for £8. For this year, there was a new mood, a new buzz, and huge optimism that before the day was done, something special was destined.

The reason was down to one man, the calm eye at the centre of a patriotic storm: Andy Murray.

It all began last year, of course, when Wimbledon heralded London 2012 with a mood new to the original home of tennis. Murray reached his first Wimbledon final, went on a month later to take Olympic gold on the very same Centre Court against the very same man, Roger Federer and, riding a new confidence, took his first Grand Slam at the US Open. Not only was the monkey was off his back, he had found a place in the hearts of a nation.

This time, he played a different man, but the mood recaptured that heady summer of 2012. After months of cold and rain, the sun came out to play on the hottest day of the year. Four hours before Murray even arrived on his stage, the grassy terraces were packed, Pimms at the ready, umbrellas up against the heat instead of the rain.

Elsewhere, memories of Olympics success resurfaced with other national successes: The British Lions took a long-awaited victory in Australia, Justin Rose won the US Open golf title—and watched on from the Royal Box, and now Briton Chris Froome had taken the Tour de France yellow jersey after winning the first mountain stage.

And Murray was rising to the occasion with the confident bearing of a champion in waiting.

He was just 18 when he first played in the men’s main draw at his home Grand Slam. That was in 2005, and even then he reached the third round.

By 2008, he was a quarter-finalist, then made three consecutive semis before coming within touching distance of that golden trophy last year. He wept, but he finally believed, went on to claim Olympic gold and the US Open, reached the final of the Australian Open this year, and claimed the No2 ranking which he still holds.

And despite a back injury taking him out of the Rome Masters and the French Open, he returned to win Queen’s and, last week, he became the most successful British man in Grand Slam history, winning his 107th match.

But it was another Fred Perry record that has dogged him since he first rose into the tennis elite. Not since 1936 has a British man won Wimbledon, and having faced one of the finest ever to lift a racket at Wimbledon last year, Murray now had to contend with the current best, No1 seed Novak Djokovic.

And Djokovic, who won here two years ago, had a long history with Murray. Born just a week apart, they grew up through juniors together and had played each other 18 times before.

This was their fourth meeting at a Grand Slam, and the third of the four straight Major finals that Murray had now reached. He beat Djokovic in New York in a classic five-setter but lost to him in Australia. However, they had only ever played once on grass—on this very court. And that was a hugely significant win for Murray in the semi-finals of the 2012 Olympics.

Yet despite the back-story, the expectation, the hopes that rested on Murray’s shoulders, he remained calm, composed and grateful to the thousands who filled Wimbledon and, at the other end of the British Isles, the Dunblane Centre in his home town.

“I think I’ll probably [be] in a better place mentally [than last year]. I might wake up on Sunday and be unbelievably nervous, more nervous than I ever have been before, but I wouldn’t expect to be.”

And he certainly didn’t look nervous as the match erupted in rip-roaring style, just as most anticipated it would between what has become the closest rivalry in tennis. Centre Court was a cauldron—touching 40oC—but the very first rally set the tone, a 20-stroke affair of multiple angles from the baseline. Murray won that and the next two points for a break chance, but Djokovic won the next five in a row.

Djokovic’s next service game brought more of the same, a 24-stroke rally, again going to Murray. They headed to deuce again with a 25-stroke rally. Three deuces later, and Murray managed the break inthe eight-minute game: There were already 20 minutes on the clock.

More gruelling punching and counter-punching tennis, ground-strokes pounded to the corners on both wings, brought an immediate break back to level. Both looked exhausted already, donning ice-collars at end-changes.

It became clear that the different ends caused different serving problems. Murray held to love from the Royal Box end—watched over by the likes of the Prime Minister, Rod Laver and Manolo Santana—then broke Djokovic who served at the other end in a flurry of Serbian errors. Murray managed to hold, serving into the sun, but only just. He faced two break points, and on the second, he benefited from a strange out call from the umpire that both players chose to ignore and Murray won the point.

Yet another marathon rally—26 strokes—in a marathon game—eight minutes—brought up another break point but, after a third deuce, Murray held. He looked both exhausted and drenched but he served out the set with four big serves to love, 6-4.

Despite some searing, draining rallies, it was Murray with the winners to his name, 17 to just six errors, and Djokovic with the exact opposite, though the discrepancy did not reflect how tightly many of the games had been.

Still Murray pressed to work three break points in the seventh, and the pressure told on the Serb. He doubled faulted, conceded the game, and failed to capitalise on break points in the eighth. Indeed Djokovic looked edgy, especially as he had run out of challenges on a call that went—rightly, it so happened—in Murray’s favour.

Few games were easily won, but Djokovic’s concentration went completely with another contested line call in the 11th game, he netted two forehands, gave Murray the break and the Briton, chanted on by the crowd, aced for a love hold and the set, 7-5.

Now people dared to talk of that Perry record, especially when Murray broke in the opening game. But Djokovic showed why he has so often come out of big matches the winner. He lifted his level, cut his errors, and deployed some killer drop shots to break and break again.

The mood became more and more tense, each making mistakes, each going for outright winners. Murray tracked down, not for the first time, a racing pick-up to make a passing winner, held serve and chased down every ball again in the ninth game. The effort earned him a break and a nation leapt to its feet, fully aware that he would serve for the title.

He went 40-0 on the dot of three hours but it would take many more minutes before he could claim the trophy as Djokovic fired some astounding winners to level, and then created three chances to break via four deuces. Finally, another remarkable rally gave Murray a fourth match point and this time he took it.

As Wimbledon rose in celebration, he fell to his knees, weeping.

Then came the celebrations, first with Djokovic, then around the front row of Centre Court, finally with his box—and it was Ivan Lendl he greeted first. He explained afterwards: “This is especially for Ivan: I know I’m not the easiest person to work with, and he’s a fantastic person.” And the world saw a very rare thing: a smile on the Czech face.

Murray said before the match: “I don’t know if I’ll ever have [the] sort of feelings like I had winning Olympic gold here, a home Olympics. I’ll never get the opportunity to do that again, so it was probably one of the proudest moments of my career.”

As he entered the packed Media Centre to an ovation, he still looked shell-shocked, but that was the first thing he was asked.

“I think winning Wimbledon is the pinnacle of tennis. The last game almost increased that feeling. I worked so hard for that last game! It’s the hardest few points I’ve had to play in my life. Yeah, winning Wimbledon….I still can’t believe it, can’t get my head round that.

“The last 30 minutes have been a bit of a blur really. I mean from 4-2 down in the third set to now—I don’t really know what to say just now.”

But asked how he had done it, he added, with absurd understatement in the face of his achievement: “I think I persevered.

“That’s really been it, the story of my career probably. I had a lot of tough losses, but the one thing I would say is I think every year I always improved a little bit.”

And of course, people wanted to know why Lendl had featured so prominently in his celebration: “He said that he was proud of me, which obviously coming from him means a lot.

“I just think for him, obviously ideally he would have won it himself, but I think this was the next best thing. I think he believed in me when a lot of people didn’t.

“He stuck by me through some tough losses the last couple of years. He’s been very patient with me. I’m just happy I managed to do it for him.”

Of course, he knew he had done it for a nation, too, the first men’s champion since the Second World War, the first, as someone helpfully pointed out, to do so in shorts.

But he had done it, first and foremost, by his own efforts, his own determination, his own talent—as some of us always believed he would.