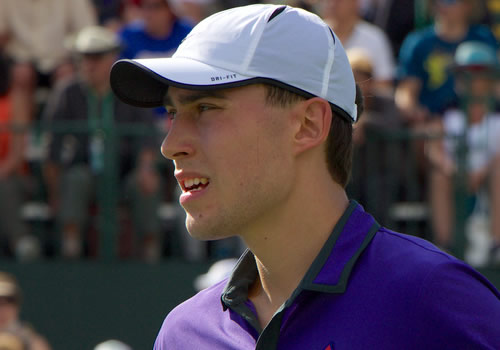 Jerzy Janowicz described himself as the “happiest person in the world” after his 7-5, 6-4, 6-4 victory over fellow Pole Lukasz Kubot earned him a place in the Wimbledon semi-finals.

In just his second Wimbledon event, the 24th seed hammered home 30 aces off of his impressive serve, and broke the unseeded Kubot once in each set to seal his first ever grand-slam semi-final.

And despite reaching the final of the 2012 BNP Paribas Paris Masters in November, the Pole admitted that Wednesday’s quarter-final victory was the best moment of his career to date.

“Right now I’m the happiest person in the world,” said the 22-year-old Janowicz. “I’ve made the semi-final of a Grand Slam; it’s my best result ever.

“I have in my mind last year Paris, because I was there in the final, but this is a little bit of a different situation. This is a Grand Slam, so I think this Wimbledon goes in front of Paris.”

Janowicz will face Britain’s Andy Murray in the semi finals, and despite beating the Briton when the pair met in third round of the 2012 Paris ATP Masters last November, the Pole insists that he will be focussing on playing his own game.

He added: “I have to be focused on my tennis. Playing against Andy, it will be a really cool match, a really nice atmosphere there.

“For sure the crowd will not really help me, but we’ll see how it’s going to be. [Andy] is a great player. He’s been a top player for many, many years. He won the US Open last year, so it’s definitely not an easy match.

“I was able to win one match against him last year, so I hope I’m going to be able to do it one more time.”