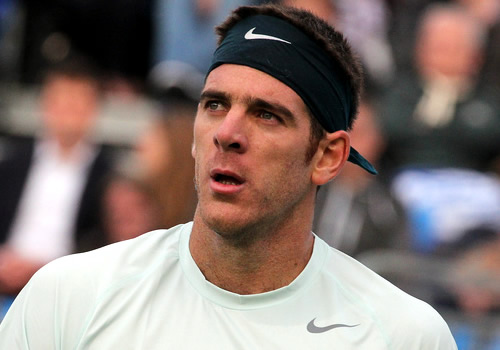 This may have been one of the most surprising Wimbledon’s in recent memory, with many of the box-office names falling in the first week, or soon after.

Yet come men’s quarter-final day, there was quality, depth—and the top two seeds—still in place. World No1 Novak Djokovic and No2 Andy Murray were still on course for their appointed final showdown.

But what the mayhem of the first week had left in its wake was one of the most unbalanced final-eight draws of recent years—and the weight had shifted strongly from the bottom half to the top.

For home favourite Murray, it looked as though fate was on his side: Rafael Nadal, Janko Tipsarevic and Stan Wawrinka went in the first round, Roger Federer, Jo-Wilfried Tsonga and Marin Cilic in the second.

For Djokovic, however, every one of the top-eight players scheduled to reach the quarters had done so. No4 David Ferrer would play No8 Juan Martin del Potro, while Djokovic faced No7 Tomas Berdych.

And Djokovic’s quarter-final posed a big challenge for two very good reasons. Although the Serb held a big 13-2 lead over the Czech, his two losses were noteworthy: The first a straight-sets defeat at the 2010 Wimbledon, their only grass-court meeting; The second in their most recent match, this May at the Rome Masters.

Djokovic nevertheless remained the favourite to advance, but the big question was: who would he face in the semis?

There was some controversy over Ferrer being seeded No4, with many subscribing to the view that compatriot Nadal should be the one to head his own quarter. But here was the 31-year-old, the oldest of the eight, into the quarters for the second consecutive year.

He could, if he reached the semis, become only the second Spaniard after Nadal to appear in the semis of all four Slams in the Open era—but whatever the result, he would rise to a career-high No3 ranking, ahead of not just Nadal but also Federer. Not bad after 13 years on the tour.

His opponent, still only 24, had reached his first Wimbledon quarter without dropped a set, completing his set of Major quarters. He showed his continuing improvement on grass at last summer’s Olympics, coming within a hair’s breadth of beating Federer in the semis and then beating Djokovic to take the bronze medal.

Another significant tick in Del Potro’s box, should he turn around his deficit against Ferrer, was that his only two wins over top-10 players in 2013 were against Murray and Djokovic—his likely remaining opponents.

However, Ferrer had often posed him problems, winning six out of their eight matches. And most significantly, the Spaniard had won the last four, including a straight-forward, straight sets win in the fourth round here last year.

However, the match initially looked as though it would be over before a game had been played. Del Potro injured his knee in the fourth round against Andreas Seppi, and had it heavily taped. With a break point chance in the opening game, he raced wide to the backhand wing, lost his footing and was felled like an oak.

It took some minutes for him to rise, some painkillers from the doctor and a worryingly long break before the action got under way again—and Ferrer was commendable in holding his concentration and his serve through several deuces, especially as he was in the rare position of carrying an injury of his own to his left ankle.

It soon became apparent that del Potro’s movement was good enough to fire his formidable serve and wield his signature cross-court forehand missile. He held serve and broke in the next game to lead, 2-1, but it had taken 24 minutes of physically demanding baseline tennis.

Ferrer tried to break things up with some drop shots, and came to the net with increasing frequency, but no matter how long they rallied, or how much Ferrer put into his shots, he could not contain del Potro’s heavy and resilient game.

Whenever Ferrer looked as though he had an opening, the Argentine snuffed it out with a big serve, and his huge strides seemed to eat up the baseline as Ferrer hurried and pummelled for all he was worth.

The seventh game brought more break points against Ferrer, and more energetic resistance—and the crowd just loved it. But del Potro’s forehand was irresistible, forcing enough errors to break—this time courtesy of a backhand winner—and he served out the first set, 6-2.

The pattern was much the same in the second set, though it played out rather faster. Ferrer had to work super-hard from the very first game, holding off 30-30, and he continued to do so until 4-4. But even picking off the occasional smash or finding the lines from the baseline, del Potro was like a brick wall.

Another smash held off break point in the ninth game, but not for long. On the next, del Potro broke and served out the second set, 6-4.

It was ruthless, near flawless hitting from del Potro. He opened the third set with a love service game—and another forehand winner—but still Ferrer battled to stay with him. With the advantage of serving first, the Spaniard had a glimmer of a chance at 5-4 when he pushed del Potro to deuce, but a pair of aces took them to 5-5 on the dot of two hours, and with both still playing near the top of their form, it came down to a tie-break.

Still there was little between them, del Potro edging the lead with two aces, Ferrer pulling level with a winning smash. But del Potro saved his best for last, the biggest return of serve of the day, to bring up match point, and he collapsed at the end of the match just as he had at the start—this time in delight.

The Centre Court crowd cheered these two warriors to the skies as the two men hugged sportingly at the net—before walking off together and signing autographs together.

The quality of the encounter was written all over the stats: del Potro made 42 winners to just 11 errors, Ferrer 41 winners to 22 errors—and bravely took the attack to the big man with 25 points out of 31 at the net. It was not enough—not least because the speed and power of del Potro’s serve was well beyond that of the 5ft 9in Ferrer.

And if the Argentine can maintain this level, and his fitness, in the next match, he will cause Djokovic serious problems, just as he did here last August.

Looking ahead to Friday’s showdown, Del Potro said: “I will need to be 100 per cent or 110 per cent against him. He’s the number one. He’s a former champion here. It’s going to be more difficult match for me like today.

“But if I’m OK, if I do everything good to be ready for my next match, I will be excited to play against him. I remember the match during the Olympic last year on the same surface.

“But this time the pressure is different, I know. I will try to be ready and do my best.”

The Serb, like the Argentine, sealed his own place in the semis without dropping a set in the tournament. Berdych had his chances, forcing a first set tie-break and leading 3-0 in the second with two breaks of serve. But with twice as many errors and fewer winners than the top seed, the Czech conceded three breaks in row to concede the set 6-4, and half an hour later dropped the third, 6-3.

Wimbledon 2013: Djokovic relieved to get past Berdych and reach semis