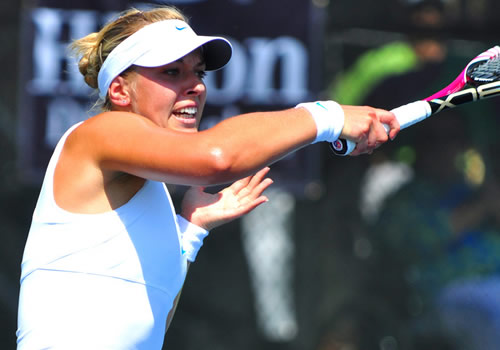 The second Monday of the 2013 Championships had garnered many expressive tags by the time play started under warm sun and skittering white clouds.

Super Monday, Wonderful Monday, and for British fans in particular, Magic Monday. The reason was written all over the draws and all across the schedule.

It was hard to know where to look on arguably the best day at Wimbledon, when the last 16 women and last 16 men in the singles competitions all vied, in the space of around eight hours, for a quarter-final place. That each of those 16-player draws featured a Briton put not one but two strawberries on the cake.

Andy Murray, world No2, finalist here last year, Olympic gold medallist a month later and Grand Slam champion in New York a month after that, took on one of the best grass-court players left in the draw, Mikhail Youzhny, on Centre Court. Before he came the top woman, Serena Williams, and after him the top man, Novak Djokovic.

Laura Robson opened up proceedings on Court 1 against a woman capable of hitting just as big as herself: Kaia Kanepi, almost a decade older than the Briton, was ranked No15 less than a year ago.

Robson was followed by two of the highest men’s seeds remaining in the draw, Juan Martin del Potro and Tomas Berdych, who played the youngest man left standing, Bernard Tomic.

Around the grounds, British duo Colin Fleming and Jonathan Marray were aiming for a quarter-final doubles place, and Court 7 was already five deep an hour before play got underway. Marray would be back with Heather Watson aiming for a third-round place in the mixed doubles and they would be followed by Fleming with Robson aiming for the second round.

If they made it, they could face Kyle Edmund, partnered with Eugenie Bouchard, who played the No6 seeds on Court 12, though 18-year-old Edmund was first playing in boys singles. Somewhere along the way would also be Dominic Inglot and Jo Konta, who reached the second round with a spirit-rousing win, 19-17 third-set victory in the first week.

Little wonder, then, that The Queue was closed by the end of play Saturday. Only ground passes would get the home crowd a chance to share in this day of high hopes.

Even though Robson was one of the first to carry this expectation, she was finding the big stage and rousing support very much to her liking. In her sight was a her first Grand Slam quarter-final—and possibly against the defending champion Williams—and a new career-high ranking of 21. She was already projected to break the top 30.

However, Kanepi had a warning:
“Sometimes I get more power and fighting spirit if people are against me.”

The Estonian, as tall and strong as Robson, had also won all four of her previous Grand Slam fourth-round matches, including the year she reached Wimbledon’s quarter-final in 2010, and had a title to her name as recently as May this year.

And like Robson, victor over No10 seed Maria Kirilenko, Kanepi had taken out another strong left-hander, No7 seed Angelique Kerber.

It was a remarkably assured Robson who settled into her rhythm the quicker, pushing Kanepi to deuce on her first two service games and holding with ease. Though they stood at 3-3 after 15 minutes, the momentum was firmly on the Briton’s side after another love hold.

The Estonian was serving first, and gradually found a better service rhythm to make her first love hold with a fourth ace, 4-3.

But come the ninth game, Robson opened up her baseline game to go 40-0 on Kanepi’s serve and with the crowd roaring in anticipation, the Briton cracked a forehand return of serve to break.

But the dangers of the Kanepi game quickly surfaced and she returned in kind, now making a cross-court backhand winner to bring up break points and then pummelling a forehand to level at 5-5. It was a case, now, of who would blink first: neither did, and they headed to a tie-break.

Again, Robson took the first advantage, bringing up 3-0 with an ace and edging to 5-2 with a backhand winner. But Kanepi dug in, forced the pace and cut out her early errors. Robson slipped on serve at 5-5 for a double fault but was now on the back foot as Kanepi forced one more error for the set, 8-6.

Robson opened serve in the second set, and found herself facing a break point straight away, but a swerving ace saved it and she rode out the storm. Indeed she stayed firmly in contention through another long, tough set, fending off a break point in the seventh game. But Kanepi was hitting freely now, and three huge returns of serve in the 11th game broke through Robson’s defences at last.

The Estonian had made just two errors in the set, a tally that would double as she served out the match. Robson boldly pulled back from 40-15 to deuce but the Kanepi forehand punctured the Briton’s court on her fifth match point and Court 1 rose to celebrate Robson’s courageous run rather than a place in the quarters.

Robson visibly fought back tears as she walked off, though still stopped to sign for the cluster of small fans at the exit. She must draw satisfaction from a new milestone passed this week and from breaking the top 30. She also has the very real prospect of a first Grand Slam seeding in New York if she keeps up her form.

Elsewhere, former Grand Slam champions were showing their worth. Na Li stormed to a 6-2, 6-0 win over No11 seed Roberta Vinci in just 55 minutes, and 2011 Wimbledon Petra Kvitova advanced with a strong 7-6, 6-3 win over the courageous serve-and-volley play of the petite Carla Suarez Navarro.

But the biggest story was unfolding on Centre Court just as Robson left No1.

The German powered to the first set, 6-2, with twice as many winners and considerably fewer errors than her illustrious opponent. Williams came back hard, making not one unforced error in taking the 6-1 second set and looked set to seal her quarter-final place at 3-0 in the third.

But each woman made break after break, enabling Lisicki to level, 4-4, break once more, and serve for the match. It took her two attempts, but she finally beat the queen of SW19 for the first time on her favourite surface.

Lisicki made a huge impression in her 2011 run, a larger-than-life personality with the biggest smile in tennis. She smiled and cried at the same time in her post-match interview, and quickly praised the support of the crowd:

“I love this court so much. She played unbelievable tennis and I was fighting for every single shot. I’m so happy!”

So perhaps not the quarter-final most expected for Williams, nor hoped for Robson, but Lisicki and Kanepi will put on some show.