Wimbledon 2013: Marion Bartoli storms to a 6-1 6-2 victory over Kirsten Flipkens to reach the final at SW19 for the second time 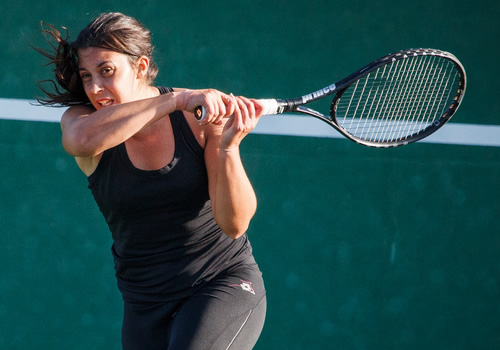 Marion Bartoli is through to Saturday's final at SW19 Photo: Mirsasha/Flickr

There is probably not a tennis fan, or even the most long-in-the-tooth tennis expert, who would have predicted a final Wimbledon quartet without any of the three top seeds, the three who have won the last six Grand Slam titles and dominated the 2013 season at the Premier level.

But No2 Victoria Azarenka and No3 Maria Sharapova went out in Round 2 and the defending champion and top seed Serena Williams lost in the fourth round.

It all meant that not only would Wimbledon crown a new champion but that the winner—No4 seed Agnieszka Radwanska, No15 seed Marion Bartoli, No20 seed Kirsten Flipkens or No23 seed Sabine Lisicki—would be a first-time Grand Slam winner.

And there were so many back-stories woven through the semi-final line-up.

Each match contained a former Wimbledon junior titlist: Flipkens in the first and Radwanska in the second.

Each contained a former Wimbledon finalist: Bartoli in 2007 and Radwanska last year.

And each featured a woman who had come back from career-threatening injury. Lisicki suffered an ankle injury at the 2009 US Open that not only kept her out of the game for five months but meant that she had to learn how to walk again: “Tennis is for me joy, nothing less than that.”

The attitude from Flipkens was much the same. After wrist and knee injuries, the Belgian was last April diagnosed with blood clots in her calf after a long haul flight from Thailand: “You start re-evaluating everything. Winning or losing a tennis match, it doesn’t make much difference.”

She fell to No262 in the world, which was not even high enough to make it to Wimbledon’s qualifying draw. With the friendship and support of compatriot and Grand Slam champion, Kim Clijsters, however, she worked her way back, at the age of 27, to her current career-high ranking, her first Grand Slam quarter-final at this year’s Australian Open and now her first semi. Should she win the title, she would break into the world’s top 10.

Flipkens was an unexpected winner against 2011 Wimbledon champion, Petra Kvitova, in the quarters, and now, in Bartoli, she faced the 2007 finalist. And while the Frenchwoman was competing in her first semi of the season, she was yet to drop a set.

Stylistically, it was certainly an intriguing match-up. Bartoli, super-bright, is an unconventional player with a big double-fisted strike on both forehand and backhand wings. And what she lacks in elegance and poise she makes up for with a training regime unlike anyone on the tour—little short of torture.

Flipkens is a player of balance, variety and classic grass-court skill: a swinging serve, enthusiasm to play at the net, and with a sliced backhand to die for. It is a complete tennis package backed up by a quiet, no-nonsense demeanour: A bit Sam Stosur, a little Justine Henin, a dash of Svetlana Kusnetsova.

But here, she looked entirely overwhelmed at the start of the match, as Bartoli came out with all guns blazing from inside the baseline—she knows no other way to play tennis. The French woman broke in the second game and again in the sixth, and pinned her opponent behind the baseline with her fierce drives to alternate corners.

And when Flipkens managed to reach the net, she was as often as not wrong-footed with a pass or lobbed. Perhaps it was nerves, which might explain her 47 percent serving average, or perhaps it was her heavily-bound knee that caused her problems—not helped by a lunging fall as another Bartoli down-the-line winner beat her. But despite making only four unforced errors, she was soon down a 6-1 set.

Bartoli was just as relentless at the start of the second set, beating Flipkens in the opening game with a perfect lob to break her serve. The Belgian seemed only able to counter the power of Bartoli with slice but made little impression. Bartoli held serve to love and broke again to 15, making one outrageous smash winner from the back of the court.

Flipkens called the trainer for help with her knee, but there was little to be done except apply more strapping. It seemed to work initially—maybe giving her just a little more confidence. She came out and broke Bartoli, but it was a short-lived reprieve. Bartoli hammered back to break, 4-1 and held with ease to love. Flipkens held for only the second time in the match—and to love—but with an hour on the clock, the killer blow was quickly landed by Bartoli, 6-2.

Bartoli’s stats were excellent, even if the Flipkens movement was not as sharp as usual: 11 points won from 11 net approaches; 23 winners to 10 errors; and twice as many points overall as her opponent. No wonder she was happy, though it was expressed in a quiet style entirely at odds with her in-your-face on-court persona:

“I played so well today, I was feeling so great. Obviously Kirsten had an amazing run, I think she was a bit injured today, but she deserves credit and a lot of respect. I saw the ball today like a football. So far we [with her new coaching team that includes former champion Amelie Maursemo] are having so much fun, wonderful memories, not only on the court but out of it.”

One must hope Flipkens will be back without any more injury problems to pursue the title that neither of her illustrious compatriots, Clijsters or Henin, ever managed to win. She admitted that her knee had been a hindrance but did not detract from her opponent’s win:

“All credit to her today, the way she played. I had nothing against her. She played an amazingly good match. I tried my slices, she didn’t have any problem with that. I tried the dropshot, she got it. I played a passing [shot], she came to the net. I tried a lob. I tried everything, actually. I was trying to give myself 100 percent, but it didn’t work out.”

So it will be Bartoli who tries to take the one extra step she failed to take in 2007. She would either face another former finalist in Radwanska or a former semi-finalist in Lisicki: a tall order, but a challenge will embrace like every other.