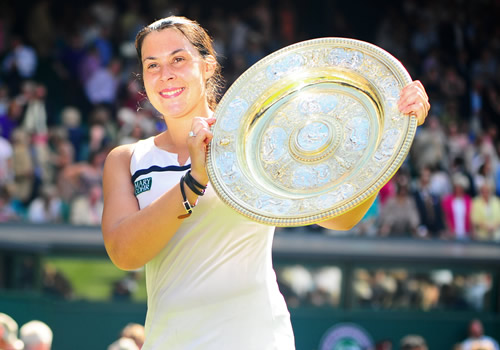 In this Wimbledon of upsets, with former champions and favourites falling like skittles, the men’s and the women’s draw reached their final and contrasting reckonings.

The men’s championship would bring together the top two men in the world, Novak Djokovic and Andy Murray, albeit via very different routes from those predicted.

On the women’s side, not a single Grand Slam champion even made it to the semi-finals, ensuring that the Venus Rosewater dish would find a brand new home. But just like the men’s draw, the women’s had unfolded unevenly.

The 2011 Wimbledon semi-finalist and No23 seed Sabine Lisicki had been forced to take the high, and arguably the harder, road, beating three Grand Slam champions along the way: In Round 1, Francesca Schiavone; in Round 3 Sam Stosur; and the biggest scalp of all in Round 4, defending and multiple Wimbledon champion, Serena Williams. To cap it all, she beat the only remaining top-four player in the semis, and finalist last year, Agnieszka Radwanska.

In the lower, less stony road, 2007 finalist and No15 seed, Marion Bartoli, was scheduled to meet Maria Sharapova, but the 2004 titlist fell in Round 2: Bartoli, in the event, played just two seeds, No17 Sloane Stephens and No20 Kirsten Flipkens. She did not, perhaps understandably, drop a set.

So these very contrasting routes brought these two compelling individuals to the final hurdle—and with some reason.

Both have had more success at Wimbledon than any other Major, both had a grass title in their resume—Bartoli in Eastbourne and Lisicki in Birmingham. And what’s more, two of their four previous meetings had been at Wimbledon, Bartoli winning in 2008, Lisicki in 2011.

And one thing was certain: There would be no lack of intensity from either. Big serving, big ground strokes, enormous energy, hearts on their sleeves. It would be first-strike tennis in a battle to take offensive control: Bartoli pounding her double-handed forehand and backhand flat and hard, going for her first and second serves with equal pace and depth; Lisicki, one of the best servers in women’s tennis, possessed better movement, volley skills and touch.

It was a recipe for many winners and many errors. Lisicki had hit 39 aces in the Championships thus far, and a staggering 201 winners—but the price was 130 errors. Bartoli, with the better return game, made fewer errors, 89, but also fewer winners, at 113. Her Achilles heel would be her over-eagerness to keep the points short, and that bold serving had reaped 27 double faults in the tournament.

So alarm bells rang when Bartoli opened serve on this brilliant, hot day on Centre Court. Facing two immediate break points, she saved them with two killer backhands, only to concede the game with two double faults.

But Lisicki also showed early nerves. She saved a first break point with an ace but conceded the second with a double fault.

Now Bartoli bounced on her baseline, though with less energy-wasting shadow-boxing than usual. She held her next service game with an ace, then broke Lisicki again. With every point she won, she clenched her fist, looking for affirmation from her box, where former Wimbledon champion Amelie Mauresmo now takes pride of place as mentor.

Lisicki’s serve was far from its best and that gave Bartoli an even stronger toe-hold. The French woman served to take a 4-1 lead, but again Lisicki’s inconsistency—now a winning serve, now a double fault, now a winning drop shot, now a netted backhand—helped Bartoli earn two break chances, and an over-hit forehand conceded another break.

Bartoli, her jaw set, served out the set 6-1, but the crowd’s allegiances to the German extrovert summoned barely a glimmer of applause. Lisicki had made 14 errors in 30 minutes, Bartoli just four.

Lisicki opted for a ‘comfort break’—presumably for a tactical refocusing of her game—and returned to open with an ace and two backhand winners and stormed to her first hold of the match.

And then came perhaps the pivotal game of the match, over nine minutes of attack and resistance. Bartoli double faulted to go 30-30 and one of her few backhand errors offered up break point. Another double fault brought another break point. On a third, she boldly followed in her serve to drive away a backhand volley winner. Lisicki pounded a glorious forehand off the next serve but Bartoli’s backhand came to the rescue for a fifth deuce and she held.

It disheartened Lisicki, and also lifted Bartoli, who tracked down a drop-shot, then a wide backhand, then a lob to win the opening point of the next game. John McEnroe summed it up perfectly: “Her eyes looked to be bulging out of her head she was so intent on tracking that down!”

Lisicki double-faulted to go 0-40 down and Bartoli rushed down another drop-shot to break.

The French woman was focused, determined, and constantly on the offensive. The pressure got the better of Lisicki again in the fifth game: She held it together through four deuces, but was reduced almost to tears as she double-faulted her way to another break. And with a love hold from Bartoli, the final kill looked close.

That was before another famous Lisicki surge. She had come back from 3-0 down in the final set against both Williams and Radwanska: Could she do it again? First she held, then she attacked the net to force the error from Bartoli, and broke, then served strongly to close the score to 4-5. Centre Court went wild.

The pressure was now firmly on that Bartoli serve—often the first thing to waver—but not this time. Four first serves, the last an ace, took her to the title in style—and a gracious winner she was too.

The women hugged, before Bartoli galloped across to her players’ box like a teenager. Standing at just 5ft 6in, her ascent to her supporters was less elegant than that of taller champions who have tried it before—but it was intensely moving.

Sitting quietly at the back was her father, displaced this year from his role as life-long coach when Bartoli, 13 years into her professional career, finally embraced the French Federation and the experienced Mauresmo in an attempt to help her mental focus. But she made it clear in her following interview, that she owed him everything. She would not play a Grand Slam final without him, so he came.

Lisicki hoped she would have another chance to win her dream trophy, as Bartoli had done, and few doubt that, at 23 and with the kind of tennis she has at her disposal, she will do just that.

For now, Bartoli takes her place in the sun—unconventional, brave and charming: a worthy champion.

MORE: The beautiful side of Marion Bartoli