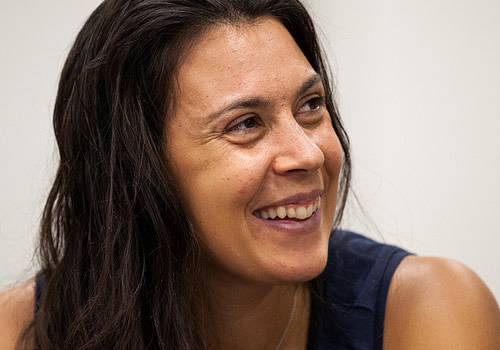 Marion Bartoli believes she deserves her spot in the Wimbledon showpiece after a problematic year both on and off the court.

The 15th-seeded Frenchwoman led 3-0 in both sets and took just 62 minutes to speed her way to a 6-2 6-1 victory over Belgium’s Kirsten Flipkens on Thursday to reach her first Major final since 2007.

Bartoli, who failed to make the last-16 at both the Australian Open and Roland Garros this year, has suffered with numerous injuries and illnesses in recent months, and believes that reaching this year’s final is a result of her recent hard work outside of the court.

“I truly believe in hard work and determination,” said Bartoli, who will play Sabine Lisicki in Saturday’s final. “I felt I really put that in every single day.

“Even if I was having some hard times outside of the court, I was still able to go on the practice court every day and practice hard no matter what was happening in my outside life, and remember myself every day I was a tennis player and what I wanted the most was to win matches.

“Somehow I felt like those kinds of attitudes should be rewarded at some point. And I believe in true determination and hard work. So I felt because I put that, I should have kind of a reward from it. Obviously I did this year.”

Bartoli was beaten by Venus Williams in her only previous Grand Slam final appearance at Wimbledon in 2007, and believes she is now a much more complete player than the one who stepped out on Centre Court six years ago.

“I’m doing everything just better,” she added. “I think I’m able to hit the ball harder. I’m moving faster. I mean, I do just everything a bit better than what I was doing six years ago.

“I think if I would play myself now with my game six years ago compared with my game today I would probably be beating myself quite easily because I’m just doing everything better.”