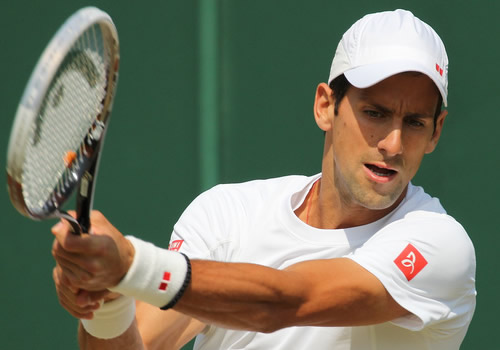 By almost every measure, across this Wimbledon and across the last few years, one man has carved out the status of top dog and was the rightful favourite to take his second title at the All England Club.

That man was Novak Djokovic, world No1, top seed, the only man to play every one of his allotted seeds through the tournament, despite his quarter being declared the ‘easy’ one—and he reached the semi-final without dropping a set.

He did so in less time than any of the final quartet, too, only facing one tie-break in each of three matches—well under 10 hours for five best-of-five matches.

But for the last two years, he has imposed himself on the men’s game. He became No1 the week he won his first title here two years ago and dropped to No2 for fewer than four months in the aftermath of Roger Federer’s six titles, including the Wimbledon titles and Olympics silver here during 2012.

Since then, the Serb has beaten Federer to win the World Tour Finals, beaten Andy Murray to win the Australian Open, beaten Tomas Berdych to win in Dubai, and Rafael Nadal to win the Monte Carlo Masters. He very nearly did the impossible at the French Open, too, taking Nadal to 7-9 in the fifth set in the semis.

Still only 26 years old, he is already second on the list of consecutive Grand Slam semi-finals, at 13, and is closing on grass-court greats such as Stefan Edberg and John McEnroe with his fourth straight Wimbledon semi. During this year’s Championships, he passed his 50th match win on grass.

But Djokovic was not the only Grand Slam champion in the semis. As well as Murray in the second match of the day, there was Juan Martin del Potro, champion in New York in 2009. What’s more, he too had reached the semis here without dropping a set, taking just over the 10 hours to do so.

And there was something even more significant about the tall, gentle powerhouse from Argentina. He may have lost eight of his 11 matches against Djokovic, but he had won three since 2011, including their only meeting on grass at the 2012 Olympics to earn the bronze medal. Del Potro won their last match, too, in Indian Wells.

The Argentine may have taken time to acclimatise to grass, may have been knocked back by serious wrist problems after his New York victory, but now he was now standing up to be counted all over again in his first Wimbledon semi-final. And he had stacked up figures the equal even of Djokovic—same number of aces—54—and almost identical levels of unreturned served, first serve points won, break points faces, service games held, returns in play… and so it went on.

But if there was one fly in the ointment to undermine the powerful attacking game of Del Potro, it was injury. He hyper-extended his knee during his third round match, and fell heavily again in the first game of his quarter-final:

“I was scared… but the doctors give me good anti-inflammatories, then I play confidence, be careful all the time with my movements.”

In fact he controlled the match with first-strike, brave hitting and smart tactics against, in David Ferrer, one of best retrievers in tennis.

He needed, at the very least, to do the same again Djokovic—arguably the best, most nimble and flexible mover on a tennis court. The Serb is also the most proficient at turning astounding defence into precision attack. Del Potro’s hope was to win from the front to avoid a dog-fight.

The first set did take on something of the dog-fight, however. It was an intense opening that took 30 minutes to reach 3-3. Del Potro, serving second, bore the brunt of the early pressure, facing a break point in the fifth game as Djokovic pummelled his backhand. Eventually the Argentine survived five deuces, and one remarkable rally of 29 strokes to hold.

It seemed to work his signature cross-court forehand into shape, but the Serb’s impressive serving held firm—indeed he still had not dropped a point on his first serve as he edged to 4-3.

Now Djokovic probed even more, throwing in drops and a winning lob. The pressure finally told, and two errors from the Argentine gave break and set to Djokovic, 7-5.

Gradually, though, as Del Potro put increasing power into his shots, the crowd’s allegiance became clear. Not that it diminished the Djokovic tennis, and the first six games lasted almost as long as those in the first set, and almost ended in disaster for del Potro again. Once more he resisted, showing just how good his movement is for such a big man.

He fought off the first of four break points in the sixth game—with a volley, then an ace and a backhand winner—and held. And this time he hit straight back, reaching a drop shot for a put-away winner to go 40-0, and broke with a backhand winner down the line.

It was not easy—Djokovic pulled him back from 40-0 to break point—but Del Potro held for 5-3 and served out to love, 6-4: They had made a dozen winner and just three errors apiece in the set.

But the battle was only just starting. At the start of the third, it was Del Potro who looked more in control, and his forehands could do no wrong. He ran down some remarkable returns and had Djokovic not just facing break points but twice flat on the ground. The Serb could only look on with hands on hips, as Del Potro both thrilled with his tennis and engaged the hearts of the crowd between points.

The Argentine fended off set points in the 12th game—three of them—and they went to a tie-break. Cue the top seed to show just why he is so hard to beat: He raced to the 69-minute set, 7-2.

The match was already three hours old, and Del Potro looked as though he had thrown in everything he had while Djokovic looked like a well-oiled machine.

Sure enough, the Serb broke through in the seventh game, and that looked like the end as the Argentine legs seemed increasingly heavy. But as so often, Del Potro’s body language belies his fitness: He broke straight back, held off 0-30 in the next game, and they headed to another tie-break.

The crowd was almost beside itself with each cracking forehand from one side, each sliding retrieval from the other, but lifted their heroic Del Potro when Djokovic reached two match points. He responded to win yet another exhausting baseline rally, made two forehand winners, produced a huge serve-and-volley play and, with the clock at four hours, took a standing ovation along with the set, 8-6, in another 69-minute marathon.

The fifth felt like the calm before the storm—and so it proved. Each faced a break point mid-set but now Del Potro looked more weary, and when his forehand began to miss its mark, Djokovic took advantage to break in the eighth. Even then, uproar accompanied one more break back chance, but finally Djokovic had his third chance for the match and, after four and three-quarter hours, he took it, 6-3.

It was, the tournament announced, the longest ever men’s semi-final at Wimbledon, breaking that set in 1989 by almost three-quarters of an hour.

But that was of little consequence alongside the unbroken quality and spirit of the match. Djokovic made 22 aces, 80 winners, and 42 points from ventures to the net. Del Potro made 48 winners, and 25 points from 37 at the net. And after 368 points, they were separate by only 12.

Best of all, they hugged one another at the net like old friends before taking their ovations from the crowd and walking off together.

Here was sport and sportsmanship of the highest level—but it is Djokovic who will have to come back and do it all again on Sunday.