Wimbledon 2013: Laura Robson’s run at the 2013 Championships came to a complete end soon after her singles defeat 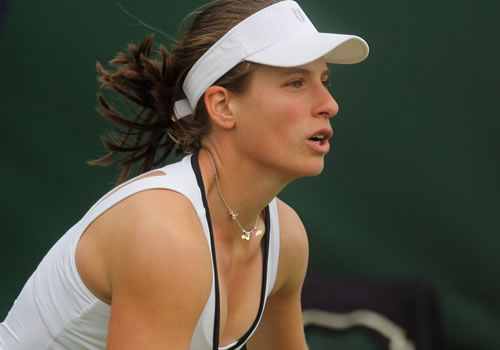 Jo Konta and Dominic Inglot play in the doubles today

Laura Robson’s run at the 2013 Wimbledon Championships came to a complete end soon after her defeat in the fourth round of the singles draw by Kaia Kanepi.

After taking the opening set, Marray and Heather Watson also suffered the same fate as their compatriots in the second round, losing 2-6, 6-3, 6-3 to David Marrero and Kimiko Date-Krumm, the 42-year old from Japan.

The teenage pairing of Briton Kyle Edmund and Canadian Eugenie Bouchard also lost, 7-5, 6-4, in the first round.

After their opening match was suspended at 5-3 in the deciding set on Saturday evening due to bad light, it did not take long for Jean Julien-Rojer and Vera Dushevina to complete the victory over 2007 mixed doubles champion Jamie Murray and Su-Wei Hseih 6-7, 6-3, 6-4.

The only remaining British pair in the draw are Dominic Inglot and Jo Konta, who play the No8 seeds Daniel Nestor and Kristina Mladenovic today on Court 18.

In the juniors’ competitions, there was some success. Edmund came back from early exits in the men’s singles and doubles to win his opening junior singles match. The 18-year-old fifth seed earned a 6-4, 6-3 win over unseeded South Korean Young Seok Kim on a packed Court 19.

Billy Harris, Jonny O’Mara and Julian Cash also went through to the second round, along with Harriet Dart in the girl’s singles. The 16-year-old now faces second seed Ana Konjuh of Croatia in the second round.

Edmund and Dart formed part of a full British schedule on Court 4, which was already packed before well before 11 am. The action was opened by 18-year-old Luke Bambridge, who reached the third round last year, but lost to Chilean No7 seed, Christian Garin, 6-4, 6-4.

He was followed onto court by Dart against the No2 seed Konjuh, and then Edmund against the unseeded Japanese, Yoshihito Nishioka.