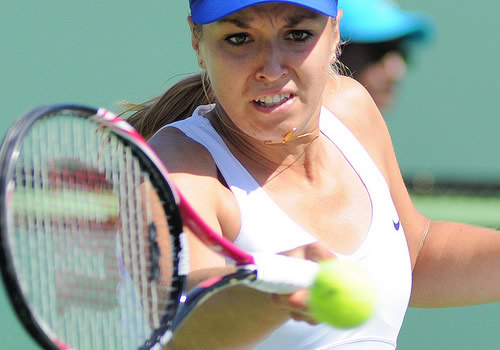 Sabine Lisicki is through to her first Grand Slam final Photo: C Mesiano/Flickr

Here was a hugely intriguing semi-final between two women with Poland in their blood.

Agnieszka Radwanska is her country’s favourite daughter, famed from its eastern border to its west, and admired by compatriots and fans the world over—she has been voted the WTA Fans’ Favourite for the last two years.

Her opponent, Sabine Lisicki, is the daughter of Polish parents but born in Germany and living in Florida. Possessed of one of the biggest smiles in tennis, she returned from five months on the sidelines, aged barely 20, with career-threatening ankle injury, and her happiness to be on a tennis court has been written all over her face ever since: “Tennis is for me joy, nothing less than that.”

Both women had proven Wimbledon pedigree: Radwanska was the losing finalist in three sets to Serena Williams last year, Lisicki lost to Maria Sharapova in the semis in 2011, was a quarter-finalist last year and in 2009.

This year, Lisicki caused the upset of the tournament by beating Williams in the fourth round—and she had already taken out Sam Stosur in the third. So she was supremely confident coming into the her match against Radwanska:

“Well, I know how it is to be in the semis. I’m glad that I had that experience before. I think this time I’m more ready. I feel much fresher, fitter, better than two years ago, I’m hitting the ball well, moving well and just more ready.”

Certainly she looked the more physically robust walking onto court. The slight frame of Radwanska often wears support tape on shoulder or on legs, but this time, she had strapping around both thighs and knees. Yet she she assured fans: “I think there’s no limit to how much pain I have to feel to give up.”

But the main reason this was such a compelling match was the contrast in their playing styles and personality.

Lisicki is an all-out, heart-on-her-sleeve player, power serve, power ground strokes and eager net game, all built on great movement. She is fast, strong and formidable when her game is on song—and on grass it has its natural home.

Radwanska is a counter-puncher possessed of remarkable defensive skills, wonderful tactical guile, with disguise and variety in all departments. She can transition from sliced defence to forehand whipped attack in a flash, chase down drops and make angled touch winners or lobs at will.

So the match promised much, and it delivered—to such an extent that the crowd, so deprived of a close contest in the first semi, could not decide who to support.

The speed with which the first two sets were decided belied their quality. Lisicki made 12 points at the net, made 19 outright winners, hit her serve at 122 mph. Radwanska countered with only two unforced errors and served at almost 80 percent accuracy. The only break came in the seventh game, as Radwanska pulled back from 0-40 to deuce, only to have a net cord deprive her on the fourth break point.

Radwanska, one of the most resilient women on the tour, fought to break back but could not convert her only chance of the set and, after an intense half hour, it was 6-4 to the German.

The second set did not take much longer, 36 minutes, but brought with it a complete reverse of fortunes. Radwanska began to manipulate her opponent into more errors, putting pressure on the Lisicki serve. The Pole broke in the fourth game, only to see a couple of German forehands and a volley winner deprive her in the next.

But Radwanska was now in full swing, making absurd returns from her haunches to break through the wavering Lisicki serve, 4-2. The loss of concentration continued for the German in the eighth game, first with a double fault to bring up break point and then with a wild backhand to concede the set, 6-2.

Radwanska had made just three additional errors in the set, but Lisicki’s errors had soared to a total of 30. She needed to refocus, and quickly.

Lisicki took a comfort break while Radwanska stretched out her legs on the back of her chair. But whatever the stresses on the Poles legs, she did not let it detract from her game. She continued to chase down shots to the front and side of the court and place her returns with wicked accuracy. She broke serve straight away to set up a 3-0 lead, but now Lisicki seemed to get a second wind.

She afterwards explained that she recalled the scoreline in her Williams’ quarter-final, where she also found herself 3-0 down in the third: “I just thought ‘hang in there: you did it against Williams, you can do it again here!’”

And she did, as both women hit their best tennis at the same time. Lisicki broke with a powering backhand winner in the fifth game and pounded out three unreturnable serves to hold for 3-3. It now seemed that Lisicki could do no wrong and she took a vital break to serve for the set at 5-4.

Now it is Radwanska’s turn to switch on the magic. She tracked down drops with wonderful sliced replies and made lobs with pin-point accuracy. She earned a fourth break point with a bullet of a backhand return-of-serve and broke to level, 5-5—and so the nail-biting drama continued until Lisicki broke once more as the set moved into its second hour.

This time the German made no mistake, taking set and match with her 26th winner of the set, her 60th of the match, 9-7.

A disconsolate Radwanska hurried from the court: “Should I just be there and dance? What could I do?”

But she admitted she was hurting, and ready to take a break: “I think I wasn’t quick enough, I could feel that every part of my body.”

Lisicki, as usual, could not stop smiling: “ I didn’t know how it would end. I fought with all my heart but I believed I could win no matter what the score was.”

She has one more thing to smile about, too. She has become the first German woman to reach a Grand Slam final since Steffi Graf here in 1999. And after her performance today, Lisicki will be the favourite to emulate Graf in lifting the silver trophy come Saturday.