Wimbledon 2013: Sabine Lisicki says experience counted after her 6-3 6-3 victory over Kaia Kanepi in the quarter-finals 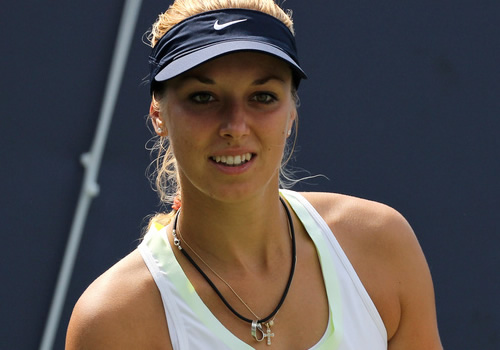 Sabine Lisicki is through to the semi-finals at SW19 Photo: Marianne Bevis

Sabine Lisicki felt that her previous Wimbledon experience helped her book her place in the semi-finals at SW19 after an impressive 6-3 6-3 win over Kaia Kanepi on Tuesday.

The German 23rd seed was in superb form on Court No1 and aside from a brief wobble early in the second set, thoroughly out-classed her Estonian opponent, who had knocked out Laura Robson on Monday.

The 23-year-old, who stunned defending champion Serena Williams on Monday, is in the last four at the All England club for the second time – and Lisicki believes that her good form in south-west London is largely down to her previous exploits at the tournament.

“I’m very happy,” Lisicki, who will face either Li Na or Agnieszka Radwanska in the last four, told BBC Sport.

“It was amazing match yesterday [against Williams] so I had to make sure I came down quick enough to be ready for today. But with the experience I have from the last three times I’ve played here in the quarters helped me a lot.

“It’s so nice. I did it [reached the semis] two years ago and played very well. Now I feel even more ready. I had great challenges on the way to the semis and I think I’m ready.”

She added: “I don’t feel pressure because for me it’s a game that I love so much. I want to keep it that way. So I’m going out there for every single match to win it and we’ll see what happens.

“It’s so great to have the crowd behind me here. That’s what I love so much. It’s the best support that you can get.”

Kanepi, meanwhile, admitted she was not at her best but still paid tribute to Lisicki for an impressive performance.

“I think I played yesterday better, I didn’t play that well today – that’s what I felt,” said Kanepi.

“But she played well. I thought if I tried to attack in previous matches I hit winners and did well, but today I was missing a lot.