Wimbledon 2013: Marion Bartoli breaks every mould and pre-conception when it comes to women’s tennis 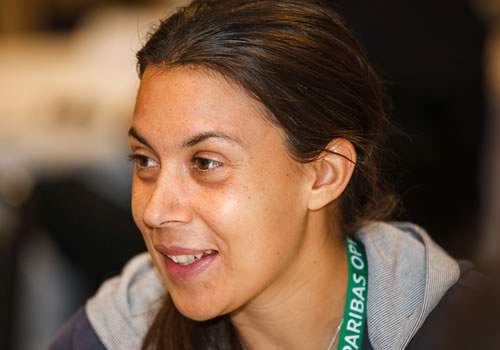 Marion Bartoli is through to her second Wimbledon final Photo: Mirsasha/Flickr

If you wanted to find a woman who broke every mould, every pre-conception, every assumption when it comes to women’s tennis, you could do better than look at—or more pertinently listen to—Marion Bartoli.

She has not missed a Grand Slam since 2002 yet has not reached a final since 2007—and that was here, where she lost to Venus Williams.

She has not won any title since 2011, yet her 13 years on the pro tour is punctuated by peaks: finalist in Carlesbad and Paris last year, in Indian Wells and Strasbourg in 2011, in Stanford in 2008—and of the course at the All England Club in 2007.

After 10 attempts and seven losses in the first two rounds, she finally made the last four at her home Slam at Roland Garros in 2011—then lost early in both subsequent years.

She reached her first US Open quarters at her 11th attempt, last year and has only reached the quarters once at the Australian, as well.

On court, she is pugnacious, a shorter-than-average powerhouse with venom in her eyes, and unconventional double-handed weapons on both forehand and backhand. Her ball-toss is huge, her serve a match winner or a liability. And set amid her aggressive tennis, she shadow-boxes behind the baseline, a bundle of nervous energy, a distracting and intimidating presence for whoever is down the other end.

And until this year, she has steadfastly remained an outsider, choosing to forsake the French tennis establishment to plough her own furrow with her equally unconventional father. They have rowed during matches—she has even banished him from courtside—but theirs has been a long and loyal partnership.

So it was remarkable—yet at the same time no surprise—that this independent and formidably bright young woman chose to drop her father as coach and come in from the cold to seek the support of France’s former Wimbledon champion, Amelie Mauresmo.

Since then, Bartoli has suffered several injuries, so the wins have not flowed—until she got her feet back on Wimbledon’s grass: She has reached the final, six years after the last one, without dropping a set.

And that means the British public has had a chance to see the flip-side of the woman with the most brutal training regime on the women’s tour and the most urgent and, for some, distracting mannerisms on court.

That flip-side is the lovely woman with sparkling ebony eyes, a torrent of near-black hair, and a smile to warm the most hard-nosed of journalists: the elegant and oh-so-French Bartoli, the quietly charming Bartoli, the witty and smiling Bartoli.

She goes into the final against the extrovert, sunny German, Sabine Lisicki, whose smile and tennis have captured the hearts of the Wimbledon faithful like few others. But spend some time in Bartoli’s company—as her words in the obligatory pre-final press conference demonstrate—and she must surely capture those Centre Court hearts, too.

Are you excited? “A little bit, yeah. Why not? I mean, playing the Wimbledon final, I think that’s quite a good match to be excited about.”

Are you ready for the fact that perhaps the majority of the people on court will be supporting her? “Well, I don’t think I will have the whole crowd against me (laughter). But at the end of the day, she’s not British, as far as I know, so…”

Do you feel as comfortable off court [like Sabine]? “Absolutely. I love to do my own cooking at night. I love to have my day off, going to Wimbledon Village, have a nice breakfast, taking my time. You feel a bit like you’re at home. It’s true that it’s a very comfy tournament. I believe that’s why every player is loving it so much here, compared to New York City or whatever, where you feel a lot more stress around, there is a lot more things going on.”

You are one step away from your 2013 goal of a Grand Slam title. “When you set some goals and it’s about to come, you try to really set the highest goal possible. Of course, it’s more like a dream for me to win a Grand Slam really. If I’m totally honest, my goal was to be in the final again of a Grand Slam. It’s really unexpected for me to be there, especially regarding what happens at the beginning of the year. But I’ve been able, again, to put some hard work on the court, off the court, and to still believe to myself that I can do it.”

After your semi-final, you said you felt you deserved to be in the final because you’ve had some tough times on and off the court. “Well, there is something off the court, and it’s pretty much private. But, you know, it kind of affects me on my mood and my results because it was some tough things to deal with. But, again, I believe that what not kill you makes you stronger, and I just was able to come back stronger. Now I’m just so happy again and so smiley. I’m having a great time off the court. I’m having an awesome time on the court. Everything is perfect again. But, yes, I had some very low moments when I felt I pretty much hit rock bottom. But I kept my head up and I just wanted to win some matches again and have some good memories on the court again. That’s what drove me every single day to go on the court, practise hard, and try to improve on my game and my physical shape.”

Who is here supporting you? “Oh, we’ll have a lot of friends. I receive a lot of text messages obviously since yesterday. I met along this tough path some amazing persons, and I am so pleased I have been able to have them on my side. They have been here when I had some tough moments and they know what I’ve been going through. So it’s going to be great to share those moments with them tomorrow, for sure.”

How has Mauresmo helped you? “She’s helping me with the way I need to deal with my stress and with my energy out of the court. Sometimes I was losing too many energy being too focused for too long, especially a lot of times before the matches. I felt when I was going on court, I was already tired from it. So she’s really helping me to just cool down when I’m off the court, have some great time, have some fun, and just be really focused maybe 15, 20 minutes before going on court and not like a day before or whatever.”

In 2007, you invited Pierce Brosnan to come…”I knew that was coming”….Have you sent out any special invites this year? “Ryan Gosling maybe (laughter).”