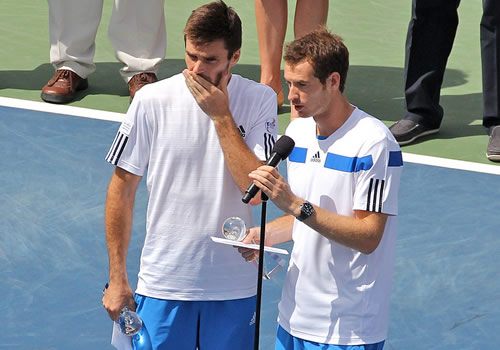 Considering Andy Murray and Colin Fleming had never partnered one another on the doubles tour before, and considering that they managed to enter the draw in Montreal with just minutes to spare, it has been some run for the Britons.

Neither had ever reached a Masters doubles final yet they had disposed of the Nos4, 5 and 6 seeds on their way to the title match. Now they faced the No3 seeds, Alexander Peya and Bruno Soares.

Indeed they were trying to become the first British duo ever to win a Masters title doubles title, though they had both won lesser events with other partners.

But the No2 ranked doubles team Peya and Soares were also looking to win their first Masters title, and the match, appropriately, remained on a knife edge for much its high-pace hour-and-a-half duration.

The seeded pair managed the only break in the first set, taking it 6-4, and made a quick break in the second as well. But in an increasingly energetic and sparkling phase of the match, the Britons broke back to level at 4-4. Fleming held serve to give his team the lead for the first time, as did each successive man, and they headed to a tie-break.

Then the superior experience of the Austria/Brazil pair took over as they raced to a 6-2 lead. The Britons snatched two more points but could not take the match to a decider.

Murray has become hugely popular in Montreal, and he and Fleming had the bulk of the enthusiastic support on Centre Court. The crowd stood to acknowledge what was a remarkable achievement, and cheered still more when Fleming revealed that his uncle was, in fact, a French Canadian from Montreal.

Clearly this has proved to be a friend-and-family affair for both men that they have enjoyed enormously.

Murray explained afterwards: “It was nice, playing together this week. Our families have known each other since we were eight, nine years old—we basically grew up about 30 minutes from each other. It’s a shame that we lost, but in the bigger picture, I think it’s pretty cool that the match was shown back home. All the families would be able to watch the match. Twenty years ago or 15 years ago, our parents wouldn’t have imagined that. It’s a shame about today, because we nearly turned it round.”

For Fleming, the week had still more import: “It’s been a really cool thing for us and our families. But if it’s taught me one big thing this week, it’s that you’ve always got to be positive because you never know what’s around the corner. I was five or 10 minutes from not being in the draw, suddenly I’m playing with Andy and we’re in the final.

“And it turned out to be a week I’ll never forget. I’ll take a lot of confidence from it. Gives my ranking a great boost, and hopefully I can get into other Masters draws and get to another level in the game.

“We had great fun week. To finally get in the draw and then make the final, it’s been a dream week for [my uncle’s] part of the family. Been great.”

Murray heads straight off to Cincinnati for the last Masters ahead of the US Open, but won’t be playing doubles there:

“No, get there tonight, and start training tomorrow, get a couple of days in and hopefully some matches.”

And if the athleticism of his tennis during the match was not eloquent enough about the state of his back—and his fitness in general—then his assurances afterwards were.

“I felt good, and yesterday as well. With the US Open in a couple of weeks, I just wanted [yesterday] to make sure nothing was wrong. There were some good points out there, just a shame we couldn’t do it.”