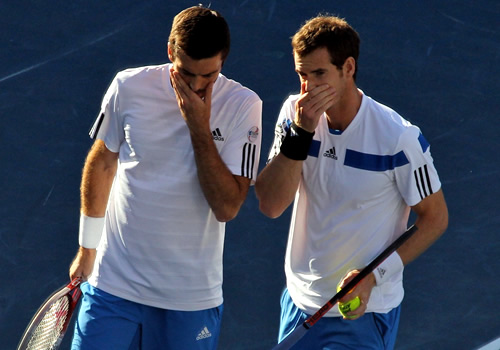 World No2 Andy Murray may not have come to Montreal expecting to reach the singles final.

He is far too cautious to claim as much, though his hopes must have been high when he saw the leader of the rankings race, Rafael Nadal, drawn in the same half as world No1 Novak Djokovic. They, after all, were the only other winners of the Rogers Cup in the draw once Roger Federer had withdrawn with injury.

However, things panned out rather differently from any such hope or expectation. Murray’s campaign came unstuck in the face of some fine tennis from Ernests Gulbis in the third round.

During this packed phase of the US Open Series—back-to-back Masters here and in Cincinnati, before Flushing Meadows opens its gates a few days later—a singles loss would trigger an early transfer to begin preparations at the next destination.

But in an unusual turn of events, Murray is indeed in Montreal on finals day instead of Cincinnati. For his late pairing with fellow Scot and doubles expert, Colin Fleming, has borne both men the unexpected fruit of reaching a first Masters doubles final. Having already beaten three seeded pairs, the British duo took apart veteran Canadian Daniel Nestor and his partner Robert Lindstedt, 6-3 6-0, to set up a title match against No3 seeds Alexander Peya and Bruno Soares.

Fleming is a veteran of 13 doubles finals and seven titles with other men—most successfully with Ross Hutchins and latterly Jonny Marray—but has never played with Murray before. Perhaps, it was suggested, they should try it again?

Fleming jumped in: “Don’t put pressure on him!”

And while not pouring cold water on the idea, Murray added: “I’m sure there’s a chance we’ll play again in the future [maybe in Davis Cup] but it’s best in the doubles to stick to your regular partner and not chop and change too much. I’m sure after this week, Colin and Jonny will get back to doing their thing.”

What has been particularly impressive from Murray’s point of view is that he has played only one other doubles event this year, with his brother Jamie in Indian Wells—the fewest he has played since his first year as a pro in 2005.

Had Murray advanced in the singles, he may have decided to follow Nadal’s lead and withdraw—as the Spaniard and his partner Pablo Andujar did after winning their first-round match. But now having reached the final, did he have concerns about his preparations for Cincinnati Masters, which begins tomorrow?

“I think it’s easier to adjust from a quick court to a slower court: You have a bit more time on the ball. I’m getting matches, I’ve had some good practice here as well, the conditions here aren’t too far off the US Open. But Cincinnati’s always tricky conditions. I’ve got there early before and not played well and sometimes I’ve got there late and played well.”

There was, though, some small cause for concern during yesterday’s semi-final. After five games, Murray called the trainer for treatment to his back. He recently missed almost a month, including the French Open, to heal a back problem, so the last thing he needed was a recurrence just a fortnight before embarking on the defence of his first Grand Slam title in New York. But no, he assured, he was simply being cautious:
“It was actually quite cool out there and obviously I’ve got a couple of big tournaments coming up in the next few weeks so just wanted to make sure it was fine. I mean, the US Open’s very soon, and you can’t afford to be missing six or seven days of practice or anything like that, so I just wanted to get it checked.”

There is, for the top singles players, much to be gained from time on the doubles court, of course. In particular, it can sharpen net skills and provide an opportunity to hone some new plays. Nadal admitted to me at the start of the week that his primary concern in playing the occasional doubles was to practise elements of his game, even though he would like to play more often if the packed singles schedule permitted it:

“I have to be honest, I play for practice. I normally don’t play doubles in a Masters 1000. Indian Wells and Miami are easier because there are a lot of days off between matches, but these kinds of tournaments you play every day. But after seven weeks without playing a tennis tournament, one match of doubles before the first singles can help me little bit…Seriously, I enjoy a lot playing doubles…You can find things in doubles that you can adjust then on the singles that can help you to be better player.”

Murray, asked the same question, agreed, but said there was more to it than that:

“Most of the time, I play with the British doubles players so I’m not just playing for practice. I want to win, because it helps them and I’ve known all of them since… well Colin and Ross Hutchins since I was 10, and my brother is my brother. So when I play with them, I play, I don’t just want to laugh and joke around. When I play with my brother especially, I get quite stressed out, because I really badly want to win for him.

“And for certain things it’s definitely better [than practice]. In terms of returning, serving, sharpness at the net, it’s perfect.”

Fleming added: “It’s already been a run I’ll never forget, but if we could go one more and lift a Masters series trophy, I might never better that in my career. I would never forget it. [But] I think once you get to any final, the aim is to win the tournament.”

In the long term, Fleming was looking forward to reviving his successful partnership with Hutchins, now in remission from Hodgkin’s lymphoma:

“I know he’s back training in London a little bit, just gradually building up, so we just have to wait and see how that goes, but yes, our intention is to play together as a team. We’re really close friends, and we had two good years when we felt we were progressing, so I hope we’ll be back on court in the not too distant future and winning matches again.”

No doubt Hutchins will be glued to the match—which, it was confirmed yesterday, will be broadcast live—and cheering on his friends to what would be a rather special title.