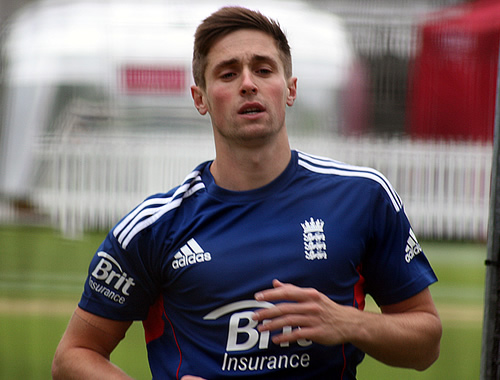 Chris Woakes made his England Test debut at The Oval Photo: The Sport Review

England’s selectors have often been heralded for their decisions at each juncture in recent years.

A player’s promotion would repeatedly be met with a certain knowingness from even the most partial of cricket fans.

However, for Wednesday’s fifth Ashes Test, the panel got it hideously wrong.

Australia closed day one on 307 for four, with Shane Watson taking full advantage of some shoddy bowling to hit his first ton against England.

Chris Woakes and Simon Kerrigan were part of an unusually large 14-man squad for the Oval Test when the announcement was made on Sunday.

The official line was Woakes was supposedly a like-for-like replacement for the injured Tim Bresnan.

While Kerrigan was to take advantage of Monty Panesar’s recent demise and get some much-need exposure by bowling at Kevin Pietersen, Alastair Cook and Ian Bell in the nets.

Few had actually expected them to play.

Many had anticipated Chris Tremlett to make a long-awaited return to the international ranks, in place of Bresnan, with the rest of the team picking itself.

Yet, spectators were left aghast when it was announced that both Woakes and Kerrigan would be making their England Test debuts, replacing Jonny Bairstow and Bresnan respectively.

One thing you can be sure of, it was a move made with the future in mind.

Never would we have had a stark reminder of the nervous 1990’s, when players were chopped and changed for each Test match, if the Ashes had still been up for grabs.

In the past, the selection panel has been praised for its due care and attention. Kerrigan and Woakes’ inclusions felt rushed and ill-thought out.

The latter, for one, has hardly been banging on the door of Test cricket.

While his first-class season has been notable for averaging 38.68 with the bat and 22.77 with the ball, the 24-year-old looked short of the mark against New Zealand in one-day international cricket earlier in the summer.

He was dropped after two matches, having failed to take a wicket.

Kerrigan, though, can be afforded more sympathy. The left-arm spinner struggled to say the least as he suffered a case of the yips (a mental state often attributed to troubled golfers).

The 24-year-old found it increasingly difficult to land the ball on a consistent line and length during his eight overs, which cost 53 runs. His malaise did not make pleasant viewing for anyone.

It could easily be argued his selection was justified thanks to his wonderful form with Lancashire in the County Championship Division Two, where he has taken 47 wickets.

But the warning bells should have sounded when Watson laced Kerrigan to all parts in the tour match against the England Lions last weekend.

Observers of the relatively meaningless two-day match against Australia, commented at Kerrigan’s lack of control then, too. He hardly set the world alight, taking one for 66 in 17 overs.

So why just four days later was he playing against the same opposition on an even grander stage?

Even the player himself had described his call-up as “surreal”.

Neither decision carried any logic. The real loser in all this? Well, arguably, once again, it was the paying fans.

Having already shelled out for a dead match, the spectators were now watching England’s second-string bowling attack.