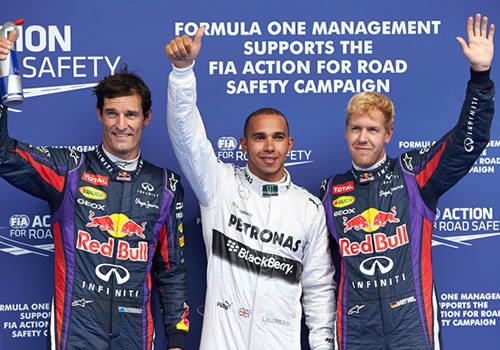 Lewis Hamilton admitted that was taken by surprise when he learnt that he had snatched pole position for the Belgian Grand Prix in a dramatic and wet qualifying session.

The Brit secured his fourth consecutive pole and said that it came as a shock as he had made a mistake early on in the lap.

“It was a good job by the team. I was surprised when I came across the line,” said Hamilton.

“I went wide in Turn One and my dashboard told me I was three seconds down and then it was four seconds and then six so I didn’t know what was going on but I kept pushing.”

The Brit claimed not to be affected by the rain and changing conditions but said it was a blessing to come out on top.

Mercedes team principal Ross Brawn expressed his delight and confidence in the pole-sitter.

“Lewis did a great job,” he said. “He really is settling in well to the team. All out team is gelling very well. I’m not sure we’ve seen all of it yet.”

Brawn admitted that strategy played a role and that they were lucky that the track started to dry out in the final moments of the session.

Force India’s Paul Di Resta brushed aside his heartbreak claiming that he was unfortunate not to secure pole but admitted his car was not quick enough in the rain.

Speaking about his decision to start the final session on Intermediates, he said: “I thought the rain was going to stay. It was quite a ballsy decision by myself. I saw umbrellas coming up so I made the right choice.”

The Brit is hoping for a dry race tomorrow, but seemed cynical about his chances if conditions were wet.

Ferrari’s Fernando Alonso – who starts from ninth – is optimistic for a good race day despite a disappointing performance today.

The Spaniard says that the Ferrari has plenty of pace and the team were in contention for a better spot on the grid.

He said: “I think it was the conditions that helped us in Q3. In Q1, with wet conditions we were first. In Q2 in the dry, we were second, so I think the pace is there.

“We were not maybe to fight for pole, but we were in contention for fourth or fifth. The aim is to win. Anything can happen here. If we manage to pass people in front, we have the pace.”