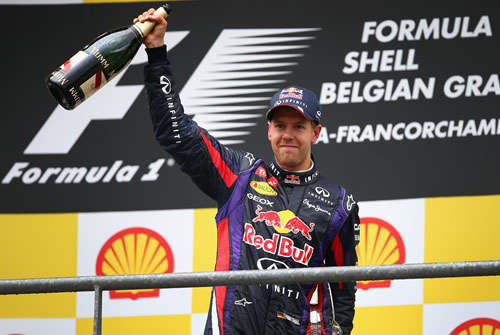 Sebastian Vettel is 46 points clear at the top of the standings Photo: Red Bull/Getty Images

Everyone came to Spa knowing the score. Some aimed to consolidate; others simply to remain competitive, and hope for a significant performance upgrade to challenge.

Out in front, Sebastian Vettel arrived in the Ardennes once again the man to beat. Behind, his rivals simply wished to have equal machinery. The German arrived in Belgium with a 39-point lead, and left with that increased to 46 – leaving those chasing demoralised.

Body language in Formula 1 often speaks much louder than any mixed zone interview post-race. On the top of the podium, there was a larger air of satisfaction coming out the German than ever before. It was a satisfaction that was telling; a satisfaction that more than half of the job had been done. With a lead of nearly two race victories, Vettel effectively has one hand on a fourth driver’s title – his satisfaction was completely justified.

Around him, Messrs Fernando Alonso and Lewis Hamilton looked subdued. In reality, both Vettel and Red Bull’s performance on race day around Spa put both drivers firmly in their place – leaving both to wonder where the next win may come from.

At Ferrari, a race from ninth to second from Alonso was typical, but how they must regret not getting the best out of the car in terms of qualifying pace. Too many times Ferrari have been compromised before the race had even begun. Spa was no different. Despite fighting valiantly to second, Alonso was only ever going to win in Belgium if Vettel was to experience a mechanical failure.

The current gap between Ferrari and Red Bull remains evident and with each passing weekend, it looks as though they will have to wait one more year to challenge for the title, and how they’ll wish to avoid a further pummelling at home in Monza a fortnight from now, which could well spell the end of any title challenge for both driver and team.

For Mercedes, race day consistency continues to be their Achilles’ heel. Hamilton’s pole the day before continued to underline the Silver Arrows’ sublime one-lap pace. However, as good as the car looked on Saturday, it counts for nothing if the car can’t compliment it on race day. Half a second separated Mercedes from Red Bull in terms of overall pace, telling in its own way.

Driver of the weekend

It’d be foolish to look beyond Sebastian Vettel once again. Red Bull played down their chances in the days beforehand, pointing to the fact that Spa wasn’t their strongest circuit in comparison to the many others they’ve since conquered. Qualifying in second with a last minute run on Saturday was crucial, given that his rivals misjudged their runs terribly in the changing conditions. In passing Hamilton after only two corners, the German had half the battle already won. In typical Sebastian style, he never looked back following this.

Amongst the many rumours circulating whether or not he’ll be offered the second seat at Red Bull for 2014, Toro Rosso’s Daniel Ricciardo did his application no harm with another points finish in tenth. Elsewhere, Jenson Button’s consistency on race day does suggest that McLaren may slowly be edging their way back into some form of competitiveness. However, they remain a country mile away from the podium let alone a race win. An honourable mention must go to Giedo van der Garde, who managed to turn an excellent qualifying into a strong race showing and keeping the Marussias and a solitary Williams behind him.

Kimi Raikkonen – who in retiring not only ended his impressive streak of 27 consecutive points finishes, it also could have officially ended any title aspirations for another year; yet another questionable shunt for Pastor Maldonado will keep the doubters firmly at his door, while Marussia’s fall to the back of the field despite a strong qualifying continued to underline the struggles the team continue to have.