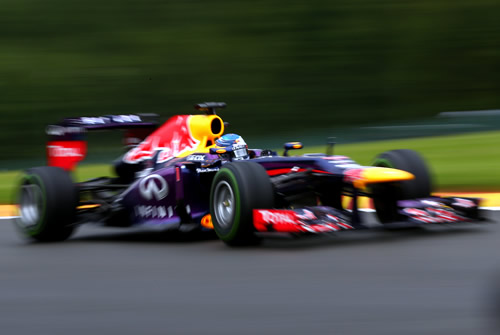 Red Bull’s Sebastian Vettel secured a comfortable win at the Belgian Grand Prix, taking his fifth victory of the season and the 31st of his career to equal the record of Nigel Mansell.

The championship leader’s victory never looked in doubt after snatching the lead from Lewis Hamilton by the fifth corner of the first lap.

Vettel finished ahead of Ferrari’s Fernando Alonso and Mercedes’ driver and pole-sitter Hamilton.

Alonso drove a dominant race benefiting from a fantastic start that saw him jump from ninth place to fifth after the first lap.

Mark Webber struggled to maintain his position during the opening lap falling from third to sixth place and there was disappointment for Max Chilton as he dropped from 16th to the back of the pack.

The Stewards were kept busy throughout the race handing out four penalties – Sergio Perez received a drive-through penalty for forcing Romain Grosjean off the track during lap eight.

Lap 11 saw Caterham’s Charles Pic retire due to technical issues and there was misery for Kimi Raikonnen when he was forced to retire on lap 26.

The Finn had problems with his brakes throughout the race and was forced to call it a day after his attempt to overtake Felipe Massa resulted in him skating off onto the run-off at the Bus Stop.

It is Raikonnen’s first retirement in 39 races and ends the Lotus driver’s record point-scoring streak which stood at 27 races.

Rejoining the track the Williams’ driver tapped the Force India of Adrian Sutil and then hitting Paul Di Resta putting the Scot out of the race.

The Stewards slapped Maldonado with a 10 second stop and go penalty for the incident and in an unrelated incident issues Chilton with a drive-through for ignoring blue flags.

Gutierrez also attracted the Stewards’ attention as he was given a drive-through penalty for leaving the track and gaining an advantage.

The rain held off for the race which allowed Vettel to coast to victory – the German is now 46 points ahead of Fernando Alonso as he seeks his fourth consecutive world championship.