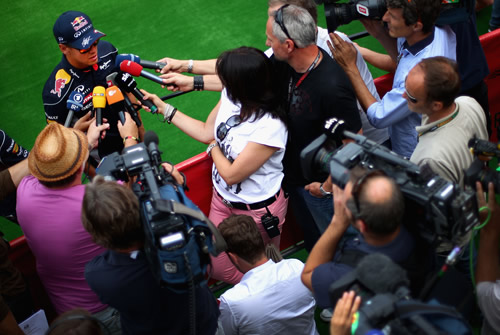 Sebastian Vettel could barely contain his delight standing on top of his Red Bull in celebration after he cruised to victory at the Belgium Grand Prix.

Although the German showed his disappointment on the podium as members of the crowd booed – which is thought to be related to a group of Greenpeace protestors.

“It was a fantastic race for us from start to finish. It was very good tactics and it helped to get past Lewis on the first lap,” said Vettel.

“We were a bit afraid of the rain coming but it was a great race. We are a bit confused here because the crowd are booing and cheering and I’m not sure why.”

Nonetheless, the German was thrilled to bring home a win and was ecstatic to learn that he has now spent 2,000 laps leading races in the sport.

Ferrari’s Fernando Alonso was less enthusiastic, claiming that the race was “boring” but even so was glad to grab some championship points.

H“We had to recover some places, we were not OK yesterday,” said Alonso. “But today it was a little boring, we got second place but no thread to Sebastian Vettel and had no threat from behind.”

The Spaniard, who currently lies in second place in the championship, said that he hopes to be able to give fans in Monza something to smile about.

Mercedes’ Lewis Hamilton, who finished third, was disappointed to lose his lead but admitted he was not surprised.

“We had a tough race but the team did a great job,” said Hamilton. “The fans have made the weekend.

“I came into this weekend thinking we did not have as great a package here but I think we have a much greater package for Singapore.”

Mark Webber was unable to share in the success of his team-mate and seemed particularly downbeat about the day.

“The two practice starts we did were diabolical. The clutch was like tractor. That’s where we were,” said Webber.

“It turned out to be not great. In the end, you murder the tyres trying to recover and it just snowballs. The win would have been difficult, but we had pace for the podium.”