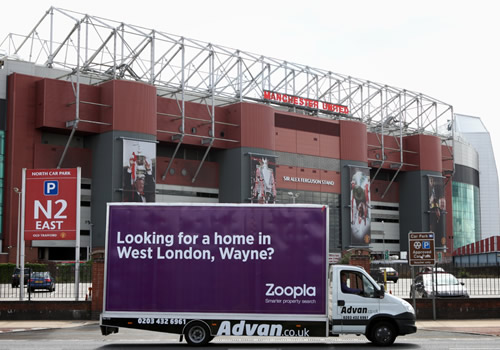 The rumours about Wayne Rooney seeking a move to Chelsea continue dominate the headlines ahead of the Premier League kick-off – and the Manchester United striker has been offered some timely property advice about house hunting in west London.

Chelsea have had two bids for the 27-year-old turned down by the Red Devils in recent weeks, amid reports Rooney is keen for a move away from Old Trafford.

Finding a new home is recognised as one of the most stressful parts of life and in a tongue in cheek stunt, property website Zoopla.co.uk travelled to Manchester and Rooney’s home town of Prestbury, Cheshire, where average property values are £642,685, to ensure that should Rooney decide to relocate to Chelsea, west London (average property value £1,754,150), that he researches his property move thoroughly.

“There is huge competition for prime property in west London,” said Lawrence Hall from Zoopla.co.uk. “Average property values in west London have risen 2.93 per cent in the last year and now stand at £482,398.

“If we look specifically at Chelsea, where Wayne and Coleen might consider if they do move south, then average property values are currently an eye watering £1,754,150 and have increased by 8.37 per cent over the last 12 months.

“At Zoopla, we’ve got all the best properties from the major estate agents in the capital. Whether Wayne and Coleen are after a two-bed apartment in South Kensington, a four-bedroom townhouse in Knightsbridge, or a mansion in Oxshott or Cobham in Surrey, our smarter property search tools will take a large chunk of the stress away from choosing a new home for their family.”

Jose Mourinho: My nature is the same, but I am more mature now

Liverpool could struggle in terms of goals, warns Jan Molby