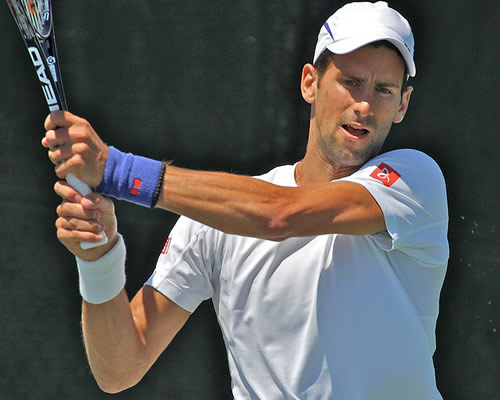 Novak Djokovic is yet to win the Cincinnati Masters Photo: Marianne Bevis

When it comes to the US Open Series swing, there is barely time to draw breath between one big tournament and the next.

From the end of July to the season climax at Flushing Meadows, five tournaments stack back-to-back. It starts gently in Atlanta, ups the ante with the Washington 500, which dovetails into the Montreal Masters, and that in turn transitions straight to the Cincinnati Masters. Indeed while two seeds still fought for the Canadian title, the first round was getting under way across the US border.

With the unique bonus payout for the players who have accumulated the most points on their way into the US Open draw, there is the potential for big financial rewards. But attractive as such incentives may be for the elite in the men’s game, several of them have bigger fish to fry this week in the 56-man draw at the Western and Southern Open in Cincinnati.

The hottest topic relates to top seed and world No1 Novak Djokovic, for while he trails Rafael Nadal—25—and Roger Federer—21—in Masters titles, he alone has accumulated eight of the nine among his tally of 14. And the one that is missing is Cincinnati.

So significant is the target that the ATP announced a special name for it during the tournament’s draw ceremony—the Career Golden Masters—and Djokovic has come within touching distance of that last trophy on no fewer than four occasions, most recently losing to Federer in the final last year.

Meanwhile, the Swiss defending champion, who has won Cincinnati in three of the last four years, will be going for a record sixth title—but he has not won a Masters title since Cincy No5 last year.

In another compelling twist, Federer could face his long-standing rival, Nadal, in the quarters, and the Spaniard has also never won this title. Indeed he has not got beyond the semis in nine appearances. However he has taken a close second place in the US Open Series Bonus Challenge after winning the Montreal Masters this weekend.

If one of the two rivals reaches the semis, he could face the only other man in the draw to have won Cincinnati since Federer’s first in 2005, Andy Murray. The Briton, who took the title in 2008 and 2011, heads the strong bottom half of a draw that also contains heavyweight Tomas Berdych.

The only top-10 player missing is an injured Jo-Wilfried Tsonga, though a couple of other seeds have injury concerns following Montreal. No11 Tommy Haas retired with a shoulder problem and Gilles Simon is still nursing a rib injury.

Unseeded Nikolay Davydenko retired with bronchitis in the Rogers Cup quarters and said he was uncertain whether he would be fit to play this week, while Mardy Fish makes a long-awaited return to the tour after ongoing health difficulties this year.

Milos Raonic, who did not finish his duties in Montreal until late Sunday afternoon, is not seeded high enough to enjoy a bye in the first round like his final opponent, Nadal, so he will have to play his opener by Tuesday latest.

And the biggest fitness question mark hangs over the defending champion himself. Federer has carried a back injury since July that forced him to sideline Montreal. That, and continuing trials of a new, bigger racket, will be put to the test by a demanding draw.

As opening rounds go, Djokovic’s could certainly be easier, though the Cincinnati draw this year is notable for a number of big opening challenges for the top seeds.

The world No1 will start against either Juan Monaco or Jurgen Melzer, two men seeded just three points apart at 30 and 33 and meeting for the first time in three years. Melzer should be favoured by these hard courts.

Djokovic’s first seed ought to be Simon, but the Frenchman is drawn against Canadian Vasek Pospisil who shone so brightly in Montreal. With a qualifier in Round 2, Pospisil could just set up a lively third-round meet with Djokovic.

The other Canadian to rise to the surface in Montreal and into the top 10 this week, Raonic, is seeded to meet No8 Richard Gasquet in round three of the next segment, though Raonic’s fast turn-around may open the way for the survivor between an unseeded Janko Tipsarevic or Sam Querrey, also closely matched in the rankings.

Gasquet’s run to his allotted quarter-final contains another big man, John Isner, who was winner in Atlanta and finalist in Washington. All of which makes Gasquet’s run tough before he even contemplates Djokovic in the quarters. Having won just three games against the man he described as ‘the best player I’ve played’ a few days ago in Montreal, Gasquet’s hopes of a semi place look slim.

The standouts from the second quarter are a third-round meeting between No3 seed David Ferrer and No16 Jerzy Janowicz, who gave Nadal a run for his money in Montreal. It would be their first meeting since Ferrer beat the Pole to win the Paris Masters last autumn.

Then, if the Spaniard survives, he may face another big, in-form man, Juan Martin del Potro, in the quarters. Ferrer has the superior head-to-head but the Argentine won their only match this year at Wimbledon and has already won the Washington title.

Attractive first-round matches here include Feliciano Lopez against Kei Nishikori, and Davydenko against Benoit Paire—who may take on del Potro in the second round.

Unless Janowicz causes an upset—which he is capable of doing—del Potro looks favoured to reach the semis and a possible rematch of his classic Wimbledon battle with Djokovic.

At the bottom of the draw, Murray is another to have a tough opener against the winner between Mikhail Youzhny and Ernests Gulbis, who beat Murray for the first time in Montreal this week. Murray’s first seeded opponent should be No14 Fabio Fognini.

But the big challenge comes at the quarter-final stage, where Murray could meet the survivor of a tasty match between No6 Berdych or No9 Stan Wawrinka. The Swiss has a 6-5 head-to-head advantage, and their matches invariably prove to be tight, whatever the surface. What’s more, both men have proved hard work for Murray, and both won their last matches against him.

Murray also has a fast turn-around from Montreal to Cincinnati after his final run in the doubles, but has been playing and practising hard, and sounded very confident about this transition to the slightly slower conditions.

Other first-round matches to watch out for are Andreas Seppi against Wawrinka and Tommy Robredo against Thomaz Bellucci.

The final quarter in the bottom half is also intriguing. It promises a repeat of the Federer and Nadal hard-court Masters quarter-final at Indian Wells, which Nadal won, though Federer was compromised by a back spasm.

Nadal’s form in winning Montreal, and especially his performance against Djokovic, suggests he is close to his best hard-court form and will be a handful for everyone lined up before Federer.

The highest is No13 Nicolas Almagro, though he may not survive the first round against Grigor Dimitrov. In terms of form, Denis Istomin—an alternative to Almagro/Dimitrov in Round 3—looks a good bet if he reproduces the game he found against Djokovic in Montreal.

No5 Federer, who is outside the top three seeds here for the first time since 2002, will need to be in good shape to win an opener against either Philipp Kohlschreiber or, depending on his fitness, Fish. The other seed is Haas, and again fitness is the unknown: an in-form Kevin Anderson could take Haas out.