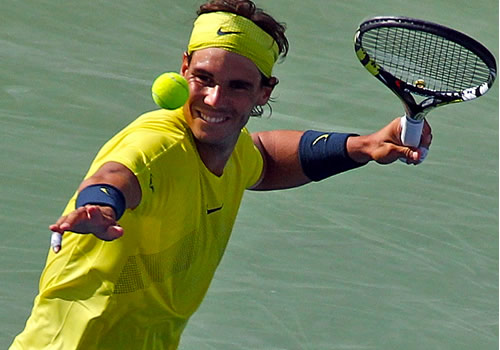 Precisely one week ago, this onlooker attempted to convey the scale of what one superlative tennis player had just achieved. That report began…

“The return of Rafael Nadal to the tennis tour in February this year after seven months away with knee injury has been nothing short of remarkable. He notched up seven titles from nine finals, which translated to a 47-3 run. And while six of those titles and 38 of those match-wins came on his favourite clay, both were punctuated by hard-court success.

Nadal duly won that 25th Masters. Yet a mere seven days later, having hot-footed it down to Cincinnati for the second of the back-to-back Masters that prelude the final Grand Slam of the year, Nadal is demanding fresh superlatives. For the Spaniard has defied what looked, on paper, like the toughest draw in his sport, to extend his record still further with a 26th Masters.

In Montreal, he had battled through the world No1 Novak Djokovic in three sets in the semis: This time he did the same against No5 Roger Federer in the quarters. With Djokovic and Andy Murray, his other two promised opponents, out of contention, he would face the unseeded American, John Isner—a man Nadal had beaten in all three previous matches.

And though the tall American was thriving on his home hard courts—he leads the US Open Series with the title in Atlanta, the final in Washington and now the second Masters final of his career—it was upon Nadal that the tennis world focused, on Nadal that the superlatives continued to be heaped.

The Spaniard was in his first final in Ohio and attempting to win back-to-back hard-court Masters for the first time in 37 Masters finals. But already he was on a career-best 14-0 hard-court run and 15-1 against top-10 opponents.

And in case it should be forgotten, Cincinnati was his 11th final from 12 tournaments played in 2013. Last week’s title in Montreal took Nadal back to No3 in the rankings, but this one would take him back to No2, the place he had been ranked when forced off the tour after Wimbledon 2012.

Isner, though, was proving to be something of a surprise package, not just this week—though he beat four top-10 seeds, from Richard Gasquet through to Djokovic—and not just this month—his strong run through North America came after a second-round retirement at Wimbledon with a knee injury.

At 28, Isner is a full year older than Nadal, but turned pro six years later than the Spaniard, in 2007, having choosing to complete his college education first. The 6ft10in American soon made an impact with his huge serve, breaking the top 20 in 2010, then the top 10 last year after reaching his first Masters final at Indian Wells. There, he beat Djokovic, and he beat him again this week, yet his greatest success against Nadal had come on his least favoured surface, a five-set loss at Roland Garros in 2011.

However despite possessing a huge serve—and he led the ATP tour as well as the Cincinnati tournament in aces—he had resisted developing his net game. Until this year, that is. With a return to the faster conditions of North America, his forward movement was better, as was his net skill.

So while August 2013 marked the first time the USA did not have a man in the top 20 in the 40 years of ATP rankings, Isner was poised to remedy that: He would certainly rise from 22 to 14 and, should he beat Nadal, to No11.

The attacking Isner opened serve, holding with ease, and he continued to do so effortlessly, throwing in the occasional serve-and-volley here, the odd drop shot-volley-combo there. He offered up not a break point chance to Nadal in the entire first set, but the Nadal serve may be the most underestimated shots in tennis, and he, too, came under little pressure. Indeed he dropped only five points out of 31 first serves.

Isner, in the face of such strong serving and remarkable all-court movement, increasingly depended on his huge forehand to finish points, and this offensive play pushed his error count to 12 as they edged to 5-5: Nadal had made only three. But the American’s bold tactics also earned him a chance for the first set when Nadal, serving at 5-6, went 15-40.

Here, though, was proof of the effectiveness of the Nadal serve. He fired off four consecutive winners, two of them aces, to take the set to a tie-break, but surely he could not hold off Isner in a shoot-out? After all, Isner led the ATP tour in tie-breaks, 32-12.

Even so, it was Nadal who opened the first tiny gap at 5-3, only for Isner to close it with that big forehand. Not until 8-8 did the next gap open, and it was again to Nadal. He served out the set, 10-8, and the onus fell on Isner to come back from a set down.

Again, he stayed with Nadal throughout the set, and again was the only man to earn a break point chance, in the seventh game. However, Nadal’s serving began now to outperform even Isner’s. He dropped just four points from 25 first serves—Isner dropped five—and only two out 10 second serves—Isner dropped four out of nine. They stood toe-to-toe with three aces apiece as Nadal increasingly read and returned the American’s huge delivery.

But it was the Spaniard’s versatility and movement that exposed the limitations of Isner’s game. He saved that break point with a reactive touch volley and would not yield another chance. This time, he dominated the tie-break from the first, and roared to a 7-3 victory.

That Nadal should claim the Cincinnati title via two tie-break sets against the best server on the tour is testament to his all-round strength, not just in defence but in attack. Here, as he did in Montreal against Djokovic and Milos Raonic, his tactics have been to take control from inside the baseline at the earliest opportunity. With such fine serving, touch at the net and overhead strength added to his array of physical and mental powers, he has become the irresistible force on the tour, as the records and statistics testify.

He said, after winning his first hard-court back-to-back Masters: “I never did something like this in all my career…First of all, I won a very important tournament. Second, after all the problems that I had, it was two weeks in a row on hard, playing at the highest level. Then the ranking is there. I was playing for a lot of points this week. And I’m in a good position.”

For he now returns to No2 in time for the US Open seedings, and can only gain points in New York since he did not play there last year.

All of which makes him the strong favourite to end the year as world No1. And that, after the uncertainties his career faced this time last year is—well, simply remarkable.