From Nastase to Djokovic, New York celebrates 40 years at the top 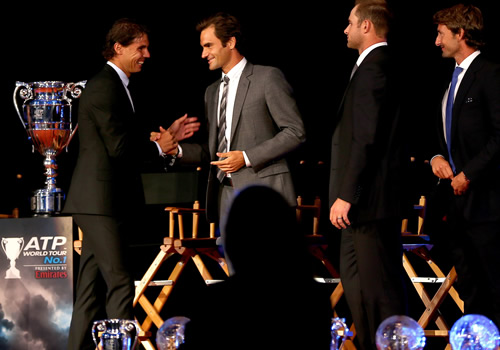 But this week, the hoardings on the expressway between Manhattan and Queens, the ads on the subway trains and the city buses, and the signs down Fifth Avenue can mean only one thing: the biggest, loudest and most colourful of tennis’s Grand Slams is in town.

The US Open, even before its big names take to the courts, is packing in the crowds—into this soaring, magnificent metropolis and into Flushing Meadows.

But among the glitz and glamour, the hits with local kids and the photo-shoots for high-end sponsors, the draws by defending champions and visits by the US’s First Lady, one event looks particularly starry.

Back in Dubai in February, the Association of Tennis Professionals launched six months of celebrations to mark the 40th anniversary of the men’s tennis rankings. Last night, on the very day that the world rankings were launched in 1973, the Waldorf Astoria rolled out the red carpet to most of the 25 men who have held the No1 ranking since 1973. Many of them had achieved the still higher accolade of being a year-end No1.

In the beginning, the first man to claim the official top spot was the charismatic Ilie Nastase, and he was also the first to claim the prestigious year-end No1. Since then, only 15 others have joined him, but in the fast-moving kaleidoscope of modern tennis, 40 years have brought about a transformation.

In 1973, professionals and amateurs had only played together for just over four years. Yellow balls were a new phenomenon, and three of the four Grand Slams were still played on grass. The first No1s used wooden rackets—and the memory of seeing Jimmy Connors wielding an innovative metal-framed weapon remains vivid for fans in that era.

Connors was among 19 No1s to join the celebrations, along with Bjorn Borg—two men who characterised the transition from the serve-and-volley tennis of grass courts to the longer baseline game suited to today’s slower clay and hard courts.

Sandwiched between Connors, Borg and Mats Wilander were John McEnroe and Stefan Edberg, three of the new breed of baseline players alongside two of the finest volleyers among the elite 16.

Yet the art of the volley is far from dead. The trio who have held the top ranking since February 2004—Roger Federer, Rafael Nadal and Novak Djokovic—have all cultivated net skills as part of their all-court array of shot-making. Federer in particular, now 32 years old, not only attacks the net during rallies but regularly serves-and-volleys, too.

Little wonder, perhaps, that his idol growing up was the equally elegant Edberg, a volleyer of the first order. One of the most self-effacing and modest characters to reach the top of the tennis pile, he was embarrassed by the Federer tribute—though his fellow No1s embarrassed him still further over his youthful appearance: “You don’t look any different from the way you looked back then!” came the chorus.

But the current trio came in for a lot of attention, too. McEnroe summed it up: “Federer, Nadal and Djokovic—these guys are carrying the torch so beautifully.” Nastase simply got on his elderly knees at their feet.

But one person over whom the entire gathering of No1s was united had been unable to join them. The former ATP Executive Chairman and President, Brad Drewett, died in May of motor neurone disease, just months after attending the launch of his brainchild in Dubai.

Mark Young, the CEO ATP Americas spoke for everyone: “Brad cherished the history of the ATP and men’s professional tennis in general. Tonight’s celebration is a reflection of that. It was his vision to see all the No1 players gathered together as we honoured their achievements.”

That so many of the illustrious band made the journey to New York is testament not just to the achievements of their fellow players but to Drewett himself.

Jimmy Connors
Connors became No1 on 29 July 1974, the year he won three Majors. Just short of his 22nd birthday, he went on to hold the position for 160 consecutive weeks. Connors was forced to give up the top ranking nine times to Borg, McEnroe and Lendl: “That’s the great thing about being No1—everybody’s after you.” He finished as year-end No1 for five consecutive years starting in 1974, won 109 singles titles, and eight Grand Slams from 15 finals. He was the first man to rank No1 for 200 weeks, and ended his tally, in July 1983, after 268 weeks.

John McEnroe
McEnroe became No1 for three weeks in March 1980, the first of 14 periods at the top. “I got goose bumps thinking that I was ranked ahead of Borg and Connors.” He was year-end No1 from 1981 to 1984 but also year-end No1 doubles player for five years, starting in 1979. He spent 170 weeks as the top singles player and 269 weeks as the best doubles player. McEnroe won 77 singles titles, including seven Majors, and 78 doubles titles.

Ivan Lendl
Lendl became No1 in February 1983 and went on to win eight Majors from 19 finals. He set a record 270 weeks as No1 in eight phases, including 157 straight weeks from 9 September 1985 to 12 September 1988. “A lot of people ask me how many weeks I was the No1 and I honestly don’t know and they never believe me. But I understand its value and I appreciate the achievement.” Lendl finished year-end No1 from 1985 to 1987 and again in 1989.

Mats Wilander
Wilander rose to No1 in September 1988 after winning his third Major of the year at the US Open, beating Lendl to do so, and ended the year at the top ranking. “The goal was to beat Lendl, to become so strong that you feel invincible. He was the target and he happened to be No1 at the time.” Wilander won seven Majors championships among 33 titles, and remains the youngest Australian Open champion, aged 17. His 20-week stint at the top was ended by Lendl.

Stefan Edberg
Edberg became No1 on 13 August 1990: “We had a little champagne that night. It was unusual. We just had a little.” He won the Junior Grand Slam of four titles in 1983 and won the first of 41 singles titles at 19. He had five spells at No1, totalling 72 weeks, until October 1992, and ended the year at the top in 1990 and 1991. He also spent 15 weeks at the top of the doubles rankings. The ATP Sportsmanship Award was renamed in his honour when he retired in 1996.

Jim Courier
Courier became No1 on 10 February 1992, and alternated with Edberg throughout the year, finally ending the year as No1. “I was stressed out about it. I was very aware of the situation. I just wanted to get there for one week, just to say I’d been to the top of the mountain.” Courier won four Major titles—two French Opens and two Australians—from seven finals. He spent a total of 52 weeks at the top.

Pete Sampras
Sampras reached the top on 12 April 1993. Three months later, he won at Wimbledon for the first time and “discovered that I really wanted to be a champion, that I had a champion’s heart and mind and will.” Having already become the youngest US Open champion in 1990, age 19, he went on to end the year as No1 six straight times, totalling 286 weeks in 11 stretches. He won 14 Majors—seven at Wimbledon—among 64 singles titles, five of them year-end championships.

Andre Agassi
Agassi became No1 on 10 April 1995, aged 24, and went on to spend 101 weeks at the top. The last time was eight years after the first, in 2003, making him the oldest No1, aged 33. “I feel like you have to always prove that you’re the best—Player of the Year, or No1, whatever, every time you step on the court. I really feel the pressure and the responsibility of being No1.” He won eight Majors and became one of two men (also Nadal) to win the career Grand Slam and Olympic gold medal.

Gustavo Keurten
The Brazilian became No1 on 4 December 2000, having survived a three-set epic against Sampras in the semis of the Masters Cup (now the World Tour Finals) and then beating Agassi in the final. “It was only like a dream. Impossible to imagine how much can change in five or six days…I never expected it to happen to me.” Kuerten was a three-time winner at the French Open, winning 20 titles from 29 finals. He totalled 43 weeks at the top in three phases.

Lleyton Hewitt
Hewitt is the youngest man to claim the No1 ranking, aged 20, in November 2001. “An even better achievement, I think, was the following year when I held the No1 ranking the whole year, and won the Tennis Masters Cup when No1 was up for grabs again.”He won his first tour title at 17 and won his first Major at the 2001 US Open. In 2002, Hewitt won Wimbledon and went on to spend a total of 80 weeks at No1. To date, he has won 28 singles titles.

Andy Roddick
Roddick became No1 on 3 November 2003, and spent 13 weeks at the top. “You can get hot and win a Grand Slam over a two-week period, but the year-end ranking is a 52-week process. The year-end No1s, I think they are the ones remembered in our sport.” Roddick won his only Slam at the 2003 US Open, but would lose to Federer in his four other Major finals. He won 32 singles titles before retiring in September 2012.

Roger Federer
Federer became No1 on 30 January 2004, age 22. “I do remember the moment really well. I went to my knees and it was ‘Oh my God, I made it to World No1’ and I have the final to play in a couple of days. Please let me enjoy the moment.” He went on to win the Australian title, one of 17 Majors. He remained No1 for the next 237 weeks, regained it from Nadal at Wimbledon in 2009, but Nadal claimed it back when Federer had reached 285 weeks—one week shy of Sampras’s record. Two years later, the 2012 Wimbledon title took Federer back to No1 to reach a total of 302 weeks. He has won six World Tour Finals among his current 77 titles, and ended the year as No1 five times.

Rafael Nadal
Nadal reached No1, aged 22, on 18 August 2008, having spent a record 160 straight weeks at No2 from July 2005 to August 2008. Nadal held the top spot for 46 weeks until Federer regained it in July 2009. Nadal returned to the top in 2010 for a further 56 weeks. “It was something I think I deserved, but [I realised it] only after I reached it, because I didn’t consider myself that good.” Nadal has won 12 Majors, including a record eight at Roland Garros, among a current 59 titles.

Novak Djokovic
Djokovic reached No1 on 4 July 2011 by clinching the Wimbledon title, having already won his first 41 matches that year. “I couldn’t ask for a better stage for all of my dreams to come true. From that moment, my life on the court changed because I realised that nothing is unachievable.” He has now won six Majors, the 2008 and 2012 World Tour finals, has ended the last two years as No1, and is just four weeks short of 100 weeks at the top.

US Open: Who can break the Serena Williams-Victoria Azarenka duopoly?

Marion Bartoli refuses to rule out return to tennis