Is world No3 Maria Sharapova a marketing genius? 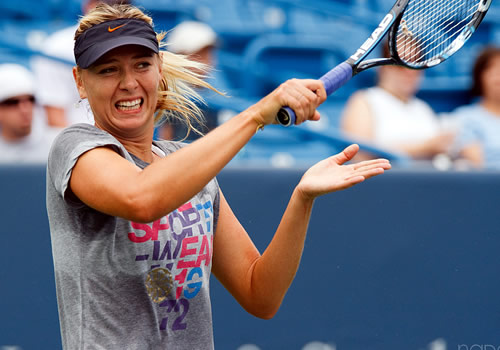 Maria Sharapova pulled out of the US Open due to a shoulder injury Photo: Mirsasha/Flickr

Tall, blonde, talented, competitive, a fighter and winner; Maria Sharpova seems to have it all.

The list of superlatives to describe the Russian could go on forever, and that is just her achievements on the court.

Last year, she captured the Roland Garros title for the first time and became only the 10th woman in the history of the game to win all four Grand Slams.

But in recent years, we have seen a different side to Sharapova. Every sporting icon is a brand in themselves; it’s the age we live in.

In the majority of sports, the money to be made in sponsorship far exceeds potential earnings in prize money.

Inevitably, whether they want to or not, the top players have to make themselves marketable on a global scale in order to cash in.

Image and brand has become everything.

Recently, Sharapova has taken this to another level. Most female athletes are involved in launching their own fashion labels or fragrances but at the beginning of 2013, the 26-year-old launched her own candy line, ‘Sugarpova’.

In between tournaments, Sharapova has gone to tremendous efforts to plug her new line globally.

In the age of social media, every action and every word is monitored, recorded and repeated. Building (or harming) a successful brand might never have been easier.

Whilst the modern day invasion of privacy has driven some athletes to aggressively hit out at the media as they follow their every move, others see it as a way to make headlines and to promote themselves or more specifically a product.

Just days before the US Open started, rumours were abound that Sharapova would officially change her name to Maria Sugarpova for the US Open.

Imagine that. A former US Open champion changing their name to promote their own candy line?

Such was the strength and the coverage of the rumour that “game, set, match Ms Sugarpova” looked inevitable until two days later Sharapova withdrew from the US Open citing a shoulder injury that had been troubling her for the last few weeks and contributed to previous lay-offs.

But for those two days, every newspaper headline in the world featured the word “Sugarpova” in it.

But was this just a marketing ploy by Sharapova all along? Was her plan to start a quite ridiculous rumour and let social media and the world’s press do the rest? If intentional, it was a potentially ingenious move.

Remember, Sharapova has spent years building up her own name as a successful brand long before anything resembling candy boarded the PR train. Why risk all that by changing her name to Sugarpova for two weeks?

And Sharapova would have been well aware of the ruckus that a potential name change would cause, especially for the sake of candy promotion.

Days before the announcement of her withdrawal, Sharapova tweeted pictures of herself practicing on the US Open centre court. Standard practice for the majority of players these days.

Nothing was mentioned of any shoulder concerns at the time and it appeared she was looking forward to a successful campaign.

Sharapova’s impending participation at the tournament, as well as proof that she was actually in New York and practicing, only fuelled the already rampant speculation about her name change.

When she eventually did announce her withdrawal it looked, from the outside anyway, a job spectacularly well done.

Not only did we all spend days talking about the name-change, but we will never actually know if it would have happened or not.

Logic would suggest not however, and there is bound to be speculation suggesting similar PR tactics at the beginning of the Australian Open next year.

Somebody who has always been rightfully praised for her focus, concentration and commitment to succeeding on court at all costs is starting to become a bit of a parody of herself.

At 26, Sharapova has 29 WTA titles to her name, over $26m in prize money alone, an Olympic silver medal and has won all four Grand Slam titles.

But has achieving the ‘career Slam’ meant all the boxes have been ticked and that anything else that happens on court from now on is simply a bonus?

Certainly the way she went about her business in the early part of the year would suggest she is as hungry as ever.

But the recent farce that lead to the sacking of new coach Jimmy Connors after one match, as well as the proposed Sugarpova name change, would suggest there may be a lack of thought and clarity in the Sharapova camp with regards to her tennis.

Managing your brand, multiple off court businesses, charities and endorsements while continuing to pursue on-going sporting success is perhaps the biggest challenge for the modern-day athlete – and surely an exhausting one.

It is perhaps a good time for Sharapova to have a bit of a rest and prepare for end-of-season tournaments.

One thing we can be sure of is that whether she is playing or not, Sharapova continues to make the headlines, making her a PR success – and just maybe a marketing genius.