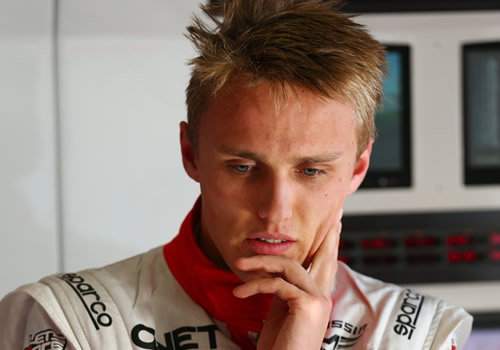 22) Max Chilton (Marussia-Cosworth) No points
Consistently outperformed by Jules Bianchi but, in fairness to Chilton, the results have improved in recent months. Questions remain as to whether he will be kept on in 2014, with up-and-coming stars in GP2 waiting in the wings. Unspectacular, with a desperate need of improvement in the final half of the season. Grade: D

21) Giedo van der Garde (Caterham-Renault) No points
Another pay driver whose position on the grid continues to be questioned, particularly given how the Dutchman was handed the seat upon Heikki Kovalainen’s refusal to pay Caterham to drive for them. A wholly underwhelming 10 races, and like a few others on the grid, he appears well out of his depth. Grade: D-

20) Charles Pic (Caterham-Renault) No points
Jumped from one backmarker to the other, believing he was moving to the one with more ambition. Sadly for Pic, it has been a tough opening half to 2013, and he hasn’t exactly moved any further up the grid with his move to Caterham. At least he’s getting a job done on his team-mate. Grade: C-

19) Jules Bianchi (Marussia-Cosworth) No points
The undoubted star of the backmarkers. Was at one pointed tipped for the second Force India seat, but in going to Marussia, the Ferrari academy driver has still been able to put his potential on display. Bianchi’s next challenge is to ensure he doesn’t end the season in the opposite fashion to which he started. Grade: B+

18) Esteban Gutierrez (Sauber-Ferrari) No points
To soften the blow of losing Sergio Perez to McLaren, Sauber opted for Esteban Gutierrez – another Mexican who brought with him significant financial backing from billionaire telecoms mogul Carlos Slim. However, the Mexican’s first 10 races have been anything but exemplary. He appears out of his depth within the sport, missing GP2, and wouldn’t have made the grid without Slim bankrolling him. A sad image for the sport. Grade: D

17) Valtteri Bottas (Williams-Renault) No points
A lot was expected of the likeable Finnbut unfortunately, given the machinery at his disposal, his mission to impress the Formula 1 grid has been somewhat limited. With upgrades expected from Williams and work already under way on 2014’s car, Valtteri may just have to play a patient waiting game. He may well be grateful for it further down the line. Grade: C+

16) Pastor Maldonado (Williams-Renault) One point
An opening half of anonymity for the Venezuelan, who continues to prove that if you have significant financial backing and drive for a team in need of it, your seat is pretty much secure. Maldonado remains the epitome of a pay driver in modern-day Formula 1, and the unfortunate reason why many talented drivers with limited financial backing will do well to see the starting grid. Grade: D

15) Nico Hulkenberg (Sauber-Ferrari) Seven points
Moved to Sauber from Force India expecting regular points finishes, but it has been anything but. Regardless, the German continues to show his undoubted talent with limited resources, and teams higher up the grid will have been noticing this. Grade: B+

14) Daniel Ricciardo (STR-Ferrari) 11 points
He may be behind Vergne in the standings, but his overall performances over the 10 races so far this season have been by far the more consistent. Unlike Vergne, he remains under the watchful eye of Christian Horner and company at Red Bull, and should he keep up his qualifying and race pace, he could well be a surprise selection to replace Mark Webber. Grade: C+

13) Jean-Eric Vergne (STR-Ferrari) 13 points
Thirteen unspectacular points from the Frenchman. Despite being out-raced and paced by Ricciardo, the Frenchman continues to find himself ahead of his team mate in the standings thanks to three points finishes amongst a sea of poorer performances. Red Bull have noticed this, and have thus ruled him out of the running for Webber’s seat. Another driver in need of an upturn in performance. Grade: D

12) Sergio Perez (McLaren-Mercedes) 18 points
Much was made of McLaren’s decision to hire the Mexican as Hamilton’s replacement. Would he go that one step further and win in a better car? Sadly, ‘Checo’ hasn’t come close. He has been consistently outperformed by team mate Button, and has at times looked like the small fish within the team. An improved finish to the season is desperately needed. Grade: D

11) Adrian Sutil (Force India-Mercedes) 23 points
Eyebrows were raised when Force India went the conservative route and rehired Adrian Sutil for 2013, but their decision has since been vindicated by a string of impressive and consistent performances from the German despite spending last season on the side lines. Continuing the second half of the season in the same manner will be the order of the day here. Grade: B-