Montreal Masters 2013: Andy Murray is back in business and focused after winning his second Grand Slam title at Wimbledon 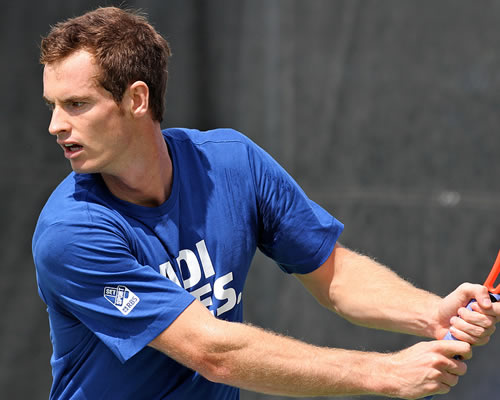 After achieving what Andy Murray described this week as “the pinnacle”, it might seem reasonable for the 2013 Wimbledon champion to take some time out, enjoy the moment, perhaps take his foot off the pedal just a little.

Yet the man from Dunblane—now 26 but, sitting with his usual quiet demeanour at the obligatory pre-tournament round table, looking much younger—is not one to rest on his laurels.

So after “one of the hardest matches of my career…one of the most physically demanding three-set matches I have ever played”, and after “a good few hours in media and the Champion’s Ball—by the time I got to bed it was almost light”, and after another day of about 40 interviews, hitting with kids on a rundown court with Adidas, and a visit to Downing Street, followed by celebrations with my team into the early hours”… after all that, he “managed to get away for a few days.”

Those few days were, it turns out, in the Bahamas, so not too far from his usual training base in Miami, and sure enough, in the blink of an eye, that’s where he was, “to start my training block for the US hard court stretch.”

For Murray is about to embark on what has always been a highly successful stretch of his tennis year. His prowess on North America’s hard courts was clear from the start: He won his first Masters crown at Cincinnati in 2008, went on to reach his first Grand Slam final weeks later in New York, and has since gone on to win six of his nine Masters titles, and reach two more finals, here. Then last year, the US Open yielded his first Slam title.

That victory at Flushing Meadows came on the back of a remarkable summer on London’s grass, where he bounced from the Wimbledon final to Olympic gold. Into 2013, after missing the French Open with back injury, he went on an unbeaten grass run through Queen’s and Wimbledon. So, I wanted to know, how easy was it to transition from benign grass to the arduous hard courts again?

“The transition from grass to hard I find pretty hard at the start because it hurts. The body hurts a lot because playing on the grass is obviously a soft surface on the body, but when you go on to hard courts, your joints hurt a lot more so it takes time to get used to that. But I grew up playing on hard courts, played all my tennis when I was practising and training on hard courts until I was about 15.

“I think the difference between grass and hard for me is that not as many players play well on grass these days: It’s more of specialist surface. Whereas on hard courts, a lot of the guys play extremely well, and it makes the tournaments very tough.”

The nature of the transition explains, to a degree, his eagerness to put in the miles in Miami: “It’s great to be able to train there after spending time playing on grass in the summer. It’s important you re-familiarise yourself with the hard court surface before heading into the US Open Series.

“So after 10 hard working days and a short flight up to Montreal, it brings me up to now, the start of another very busy few months. I always make sure I am in the best possible shape before every tournament, and that routine hasn’t changed.”

The hard work has continued with a vengeance in Montreal. The Rogers Cup is unique in scheduling practice sessions amid qualifying matches on centre court, and Saturday served up a treat for the hundreds of spectators who had made the trip out of town: Murray playing another man renowned for his intense training and practice regime, Rafael Nadal.

The session lasted the better part of two hours and cranked up from drills to dummy games and sets. This, Murray admitted to me, had a duel benefit for him.

“It’s good in number of ways. I haven’t played [Nadal] in a match in a long time now, so it’s good to practise with him to see how he’s playing and moving. But also for yourself…I was training [in Miami] but you don’t have the opportunity to practise with one of the best players of all time. As for fine-tuning your game and getting yourself up to match pace, there’s not really anyone better than to practise with than Rafa in that respect.

“Practice is important for yourself and you want to be kind of selfish, work on your own things. But I mean, I beat Rafa in a practice set in Madrid 6-0 on the clay, and if I played him in a match, there’s absolutely no way that’s going to happen!”

Murray is also very conscious that he is embarking on a unique phase in his career, his first defence of a Grand Slam title. So while he is keeping to the same routines that have borne such fruit, it is also a chance to reassess targets.

“I sat down with the guys just a few days ago and talked about that. And I want to try and win another Grand Slam. If I can do that, then next I want to win as many as I can. It took me a long time to win my first one and I know how difficult it is win those tournaments, so I’ll work as hard as I can to give myself an opportunity at the US Open.”

And what about reaching No1, which he could do by year-end?

“Every player would like to get to No1 but I would rather win another Slam or two and not get to No1. That’s my goal, to win the Slams: if I get to No1, that’s great.”

For now, then, the focus is firmly on New York, but not at the expense of the two Masters that pave the way, Montreal and next week’s Cincinnati.

“That’s something the last few years I haven’t been good at. I’ve always looked ahead to the Slams and sometimes not played my best tennis in the Masters series, which wasn’t the case at the beginning of my career. But in the last few years, I haven’t always played my most consistent tennis in the build-up to the Slams…[so] I wanna try and do well here. But I’d be lying if I wasn’t thinking about the Open!”

And he is approaching it with a confidence that continues to grow: “It’s been a lot nicer than the couple of previous years. I’d got close to winning and I hadn’t done it—that was tough for me, because I put a lot of hard work in and not managed to get there. When you win your first one after a long time you gain more confidence and you don’t worry about being remembered as someone that loses in the big matches and can’t up their game when they need to. So it’s been a nice 12 months. Going back as defending champion will be really cool.”

By his side this week, an apparently laid-back presence who has been instrumental in Murray’s rising confidence, is Ivan Lendl. Since they joined forces at the start of 2012, it seems to have been a marriage made in heaven.

“I think it’s clear since I started working with [Ivan] how much influence he’s had. He’s a strong personality but he’s very fair as well. If I work hard he’s happy. He doesn’t mind if I lose a match, provided I tried my best and put in an honest performance. If I haven’t, then he’ll be disappointed with me.

“The thing that was most helpful for me was that he lost his first four Grand Slam finals, and I lost my first four finals, and felt like I was a loser or a choker or whatever, but speaking to him made me feel a little bit more normal. He obviously went on to become a great tennis player, one of the best of all time. Being able to speak to him on an emotional level about that stuff really helped.

“Last year’s Wimbledon is a good example. I lost in the final and I was very upset afterwards, but I didn’t regret too much about the match because I went for it, I tried to play the match on my terms, and I still lost. But I could live with that whereas in the past in the Slam finals, I played too defensive and let my opponents run me all over the court—and still lost—so that was something he always stayed on at me about, trying to dictate as much of the match as possible.”

Yet he remains grounded, modest, even admitting that he could not watch the BBC documentary that he had taken more than a year to agree to.

He was asked how his life had changed since his Wimbledon victory. In his understated way, he shrugged his shoulders a little and said what most of us already knew: “Not too much.

“The few days after were pretty different from what I’m used to, but once I was back to training and back on the court, nothing changed. I was with all the same people that I was always with.”

In this very French city, then, one sentence seems particular apposite: Plus ça change, plus c’est la même chose.”

Murray will begin his campaign for a third Rogers Cup title on Wednesday against either Marcel Granollers or Grigor Dimitrov.