Montreal Masters 2013: Andy Murray loses for the first time since May as Ernests Gulbis battles to a 6-4 6-3 win in round three 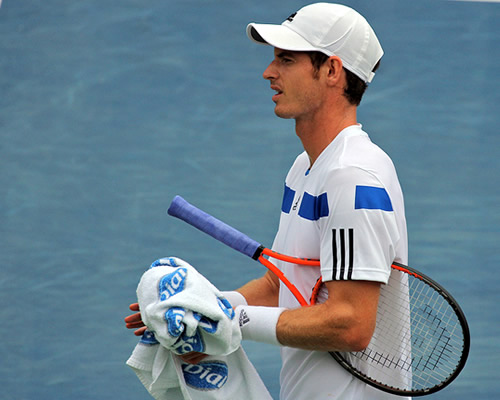 The anticipation that greeted the first match of the day between Rafael Nadal and Jerzy Janowicz brought with it high expectations, but the one that followed between Andy Murray and Ernests Gulbis also got the mouth watering.

The second seed Murray, a two-time former winner of the Rogers Cup, had not had things all his own way in his opener against the No36 ranked Marcel Granollers, but survived breaks of serve to win through in two sets and almost two hours. But this successful transition to hard courts also took Murray to a 13-match-winning streak with titles at Queen’s and Wimbledon. What’s more, he had a 20-2 winning streak on hard courts.

He had, too, beaten Gulbis in all five of their previous matches, though they had not played since 2010. Back then, the Latvian was approaching a precocious career high ranking of 25, and even back then, he took the first set on the similar surface of Cincinnati.

Since then, the young firebrand talent of Gulbis—he is still only 24—had dropped as low as 159 in the middle of last year. But he is big character who lacks nothing in a self-belief that verges on arrogance: And he has attitude, a broad fan-base and the ability to play big, charismatic tennis.

And this year, he showed a resurgence of that early form. In March, he became the first qualifier in over a year to win a tour title in Delray Beach, and he arrived in Montreal with a 13-3 run on hard courts—his favourite surface.

So Murray had his work cut out: When Gulbis is on song, his serve and forehand are formidable, and he had already put out two strong opponents in Feliciano Lopez and No13 seed Fabio Fognini.

Straight away, the Latvian looked ready for business, and faced down a break point in the seventh game with a 217kph serve. He was proving the equal of Murray in all departments, standing toe-to-toe from the baseline and changing pace with short slice and comfortable put-aways at the net.

As the first set reached the business end, there was no real sign that Murray was in danger, though, until he went down 0-40 serving at 4-5. Gulbis went after his serve to force a forehand error, then won a long exchange with a glorious drop winner. Another hammered return of serve broke the Murray defence to take the set, 6-4.

The flair and boldness of the Gulbis game certainly lifted the volume on Centre Court, but the question remained: Could this temperamental player keep the pressure on as Murray’s defensive skills and movement seemed to come into their own?

The answer was a resounding yes. Gulbis opened his serve with a length-perfect lob winner, and although Murray levelled the game to deuce, the first of five aces in the set carried Gulbis on.

Still he did not let Murray settle or find a rhythm, throwing up another lob winner in the second game. The Briton then received a time violation warning and stared at deuce again as Gulbis sent a huge forehand winner down the line.

Murray held, but his resistance was broken in the fourth, forced into errors by the pace and angled variety of the Gulbis forehand. Murray held off the first of three break points with his only ace of the set but amid ooohs and aaahs from the crowd, Gulbis out-played him on the second and led 3-1.

That seemed to sting Murray into action and he broke straight back with a sublime running angled backhand winner past the net-attacking Gulbis.

This looked like the comeback as Murray comfortably levelled at 3-3, but Gulbis had other ideas. Once again, he stepped into the Murray serve to work a chance for his subtle drop-shot-lob play and another break opportunity. It all looked so easy: a forehand powered wide to Murray’s backhand wing, followed in for an easy volley put-away.

Now he served for the match and opened with an ace, followed it with a forehand down-the-line winner, doubled faulted after receiving a time violation warning, and served out in style with a 220kph ace.

It had taken the Latvian less than an hour and a half to seal the match, 6-3, and he earned a huge roar of approval from the Canadian crowd.

Those who have followed Gulbis over the years have often been frustrated by losses that should have been wins, by his lapses in concentration and his intemperate comments. But they have also known just how talented he is, and he has proved it to a whole new set of fans with his run in Montreal.

Next, he will face either Juan Martin del Potro or Milos Raonic, having reached his first Masters quarter-final in over three years, and it would be a brave person to bet against him going further still.