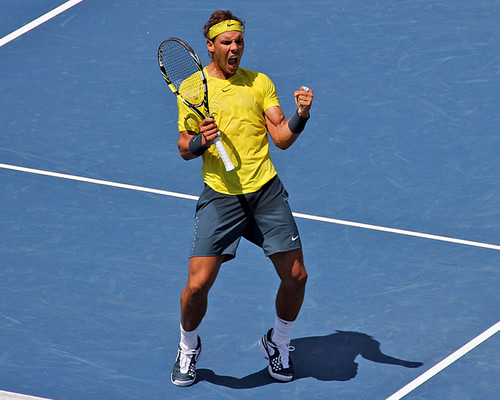 This first face-off between world No4 Rafael Nadal and the fast-rising talent, the new world No18, Jerzy Janowicz, always had the potential to be something special.

On one side was the ultimate competitor, Nadal, back this January after seven months away with knee injury to reach the finals of nine of his 10 tournaments—winning seven, including a record eighth French Open. And not only did he come into the match with a 44-3 winning record this year but with the Indian Wells title, too.

In his first match in Montreal, he looked entirely dominant, dropping just two games to Jesse Levine, and by his own understated measures, sounded confident afterwards about his physical shape:

“I am fine. The knee is not bothering me much. Last couple of days, I was able to practise with no limitation. After seven weeks without playing tennis, you start a tournament on hard courts, that is tougher for the body: You always feel few things at the beginning….I have to be proud and happy about the way that I played.”

But Nadal faced, in the 22-year-old Pole, a tall, powerful man with remarkably good movement and agility for his size, and a man who had surged from outside the top 100 to inside the top 20 in the space of a year, reached his first Masters final in Paris last October, and made an outstanding run to the semis of this year’s Wimbledon.

During that run, he beat four top-10 players and during Wimbledon hit 103 aces. He had proved himself to be confident—indeed almost fearless—in going for his shots, a confidence fed by that serve and a powerhouse forehand.

Nadal opened serve but found himself facing a break point straight away as Janowicz went on the offensive to pound his return of serves with interest. Nadal saved it with an ace, but a gauntlet had been thrown down. Already the crowd was gasping at the boldness of the Pole’s shot-making and the deftness of the drop-shots that would open up the Nadal game so often.

After the initial fireworks, the pace settled a little with strong serving on both sides—once Janowicz had thrown in a double fault on his opening delivery. Points were short, games were quick.

Nadal was the first to be pressured again, fending off deuce in the seventh game with another ace. He then turned the tables on Janowicz, chasing down a drop-shot for a winner, 0-30, but the Pole was up to the challenge, deployed his drop-shot-volley winning play and held.

Nadal, though, was on the attack, and it earned him two break points for the set, for although the Janowicz forehand and drops were working well, his serve was not: He never reached 50 percent. Even so, some courageous second serves and net rushing held off the break.

In the blink of an eye, it was the Pole who had a break chance, courtesy of those blistering return of serves, and a scorching forehand winner made the first break of the match: He would serve for the set.

It has happened to many players before: With his back against the wall, Nadal defended like a demon, though was helped by a nervy double fault and then an easy smash into the net from the Pole. Such is the Spaniard’s court presence that he forces such errors at crucial moments. Sure enough, Nadal broke back with a superb sliced backhand, and they headed, after one hour, into a tense tie-break.

Again, Janowicz had the chance to win the set. He took the initiative with a sliced backhand winner followed by a drop winner, hammered his forehand at Nadal, and went 5-2 with a volley winner. Then the errors, which let Janowicz down too often in this match, gave Nadal a chance to level at 6-6—first a double fault, then a dreadful wide forehand.

On set point, Janowicz tried the old faithful drop-plus-volley put-away, but by now Nadal was wise to it. He raced in, picked up the ball and then reached a high backhand volley to take the set.

Nadal pumped, the crowd roared, and the former Rogers Cup champion was apparently on his way.

There was, first, another twist in the story. The second set opened much like the first, though this time Janowicz served first. He held strongly, and broke Nadal immediately with some more blistering return of serves. The forehand forced Nadal onto the back foot, drawing errors on his wide forehand, and Janowicz had a break point for a 4-0 lead before Nadal managed to regroup.

Nadal admitted afterwards that he had lost a little concentration after the highly intense first set, but soon he regained his strut, his bristling body-language, and broke back to level.

The Pole managed one more game, but his power was gradually neutralised by the range, spin and power of the Nadal forehand—especially as the underestimated Spanish serving was now up to 82 percent. Nadal visibly upped the pace, broke again in the ninth, and ran out from the change of ends to finish the job.

Serving at 40-15, he drew his first time violation of the match but calmly countered it with an ace to take set and match, 6-4.

The Centre Court erupted: This had been a tense and entertaining battle—with plenty of errors, it must be said, but with some flamboyant and brave shot-making, too. Little wonder that Janowicz received a standing ovation as he left the court, and then received the ultimate accolade from Nadal:

“He’s a future Grand Slam winner, I think…I had to play very focused all the time.”

Nadal had to wait out the three-set battle that was unfolding on the neighbouring court between the qualifier celebrating his 28th birthday, Marinko Matosevic, and the No27-ranked Frenchman, Benoit Paire.

As their match extended towards two and a half hours, they were deadlocked at a tie-break set each, and a break each in the third, but then the Australian broke a second time and he served out the match, 6-3, to huge whoops of support.

The Matosevic reward is Nadal for only their second meeting: The Spaniard conceded just three games to the Australian in Monte Carlo this year. And although Matosevic is at his best on hard courts, and has now reached his first Masters quarter-final, it is hard to see him extending that record run any further.