Montreal Masters 2013: Novak Djokovic says he is "feeling good" after booking his place in the third round of the Rogers Cup 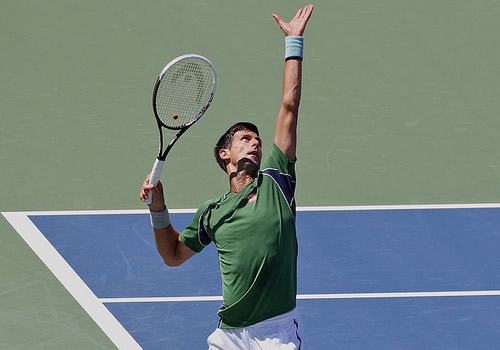 Novak Djokovic said he is “feeling good” after he won his first match since losing the Wimbledon final to Andy Murray back in July.

The world No1 breezed into the third round of the Montreal Masters with a 6-2 6-1 win over Florian Mayer of Germany in just 55 minutes as he began his preparations for the US Open in New York.

“But it’s nice to be back in a competition mode in the the first match after final of Wimbledon. It took me a little bit of time to adjust.

“These days I was practicing only during the day, with the jetlag and everything. It was a bit strange to see the lights and to play a night session.

“But I always like playing night session here because it’s always very special.

“A lot of people come to see the match. It’s very entertaining, good conditions for my game – it all fitted well.

“As the match went on, I felt more comfortable on the court.”

The 26-year-old added: “Obviously to win the first match after four weeks [is good], the first match on hard courts since Miami basically this year, it’s been more than a few months.

“In order to play that well, I have to keep up and practice tomorrow, so I’m confident I can continue on.”