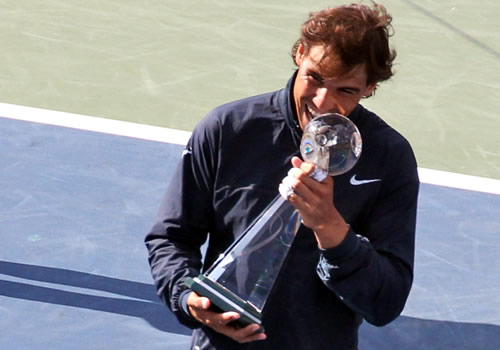 The return of Rafael Nadal to the tennis tour in February this year after seven months away with knee injury had been nothing short of remarkable.

He had notched up a remarkable seven titles from nine finals, which translated to a 47-3 run. And while six of those titles and 38 of those match-wins had come on his favourite clay, both were punctuated by hard-court success.

He won the Masters in Indian Wells, his first hard title since Tokyo in 2010, notching up his 600th match win in the process. And with his run to the final here in Montreal, he was now on an unbroken run of nine wins on the surface that challenges his knees the most.

The 2013 Rogers Cup was therefore his 10th final from 11 tournaments played—his only miss being Wimbledon after his long and intense clay swing. Should he win, it would be the third time in his career that he had taken at least eight titles in a single year.

It was his 36th Masters final, his 81st career final, and he sought his fourth Masters title of the year, his third Canadian Masters, and his 25th Masters title—and he already led the all-time leader-board by three over Roger Federer’s 21.

And if all that did not concern the No11 seed Milos Raonic enough, then there was Nadal’s performance over Novak Djokovic in the semi-finals the night before. It had been a powerful, aggressive and high-quality win over the world No1, a man who had beaten him in the vast majority of their previous hard-court battles and had taken the Rogers Cup title for the last two years.

Already Nadal was guaranteed to move back to No3 in the world for the first time in almost a year, and he led the rankings race by a mile to guarantee his place at the World Tour Finals. Now he would face the newest—and youngest—man to break into the top 10.

He had beaten the young 6ft 5in Canadian Raonic on each of the three occasions they had met, but had not faced him on a hard court—and certainly not one as fast as this—since Tokyo in 2011.

Since then, the now 22-year-old Raonic had come on in leaps and bounds to this, his first Masters final.

In San Jose this year, he became the first player to win three straight titles there in a row in the Open Era. He reached the fourth round of the Australian Open and the third round of the French Open for second time.

He helped Canada reach the Davis Cup semis for the first time by beating Italy in both his singles matches, having done the same against Spain in the first round. Granollers.

His tennis this week had also begun to show a new maturity, following the switch to new coach, the experienced Ivan Ljubicic. Raonic was playing more offensively, more confidently and had clearly spent much time and effort on improving his movement. The Canadian is a big man, with big serve and forehand, but now he was coming forward in serve and volley plays, a key factor in beating countryman Vasek Pospisil in the semis.

Nadal, though, had been asked about the growing presence of big men such as this at the top of the game.

It was a prescient comment because Nadal, at a touch over six feet, is one of the best movers on a tennis court and one of the best readers of the game. He has also learned, since himself hitting the top as a young man, that variety, adaptability and tactical nous were vital components in beating the likes of Djokovic and Federer.

And so he proved against the bold Canadian who simply looked outclassed in almost every department. Even where Raonic had led the tournament, on ace deliveries, he was undermined by the Nadal’s returning, as well as by the nerves of the situation and his home crowd.

But he managed just four aces in the match, the same as Nadal, and his serving effectiveness was far less. Where Nadal dropped only six points on his first serve and one on his second, Raonic dropped nine and 13 respectively.

So Nadal quickly took control, breaking in the third game, and again in the fifth, to lead, 4-1. The set was done at 6-2.

As if that was not enough, Nadal broke in the opening game of the second set and improved his serving level to 78 per cent. He did come under pressure as Raonic remembered what he had done against Pospisil and attacked the net to force uncharacteristic errors from the Spaniard to earn three break points.

And that was when Nadal’s other major strength showed itself, his mental fortitude. Facing 0-40, he was called for a time violation, served an ace and went on to hold serve without dropping another point.

That would be Raonic’s only break chance. Nadal applied the pressure, running the Canadian ragged across the baseline and passing him on his rare excursions to the net. Nadal broke again in the seventh game and served out the match, 6-2, in just 68 minutes.

Raonic summed it up neatly to a crowd who still cheered their home hero: “He gave me a little bit of a clinic today.”

He was not wrong. And the crowd could not resist the spirit, the tennis and the charm of their now three-time champion, Nadal. He thanked them in broken French and they roared their approval.

“I expected a great atmosphere like it was. The atmosphere is great always in Canada,” said Nadal, before commenting on his fitness. “I was able to recover well after a tough battle yesterday. I felt good physically today. That’s important for me.”

And so back to the beginning. Nadal’s return to the tour has been nothing short of extraordinary. He adds a fourth Masters to his year’s collection of eight titles to reach 25 Masters in all.

What’s more, he has laid down a marker for the rest of the US Open swing, including the US Open title itself.