Montreal Masters 2013: Roger Federer is forced to pull out with a back injury, along with Jo-Wilfried Tsonga and others 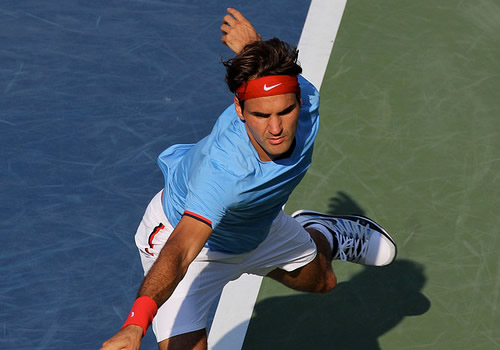 Roger Federer will miss the Montreal Masters due to injury Photo: Marianne Bevis

Roger Federer is not the most prolific winner in the draw of the Masters tournament that bears his name, Canada’s Rogers Cup. That honour belongs to the world No1, Novak Djokovic, who won his first Masters crown here in 2007 and went on to win twice more—in the last two years.

However Federer claimed two Rogers Cups when he himself was No1, in 2004 and 2006, and was losing finalist to Djokovic in 2007, but he will not threaten the defending champion for the 2013 crown.

The Swiss announced on his Facebook page just ahead of Friday’s draw that he would not be taking part: “I am disappointed not to be playing in Montreal next week. It is a great tournament with amazing fans. I look forward to competing there in the future.”

Although he did not specify the reason, Federer’s withdrawal did not come as a surprise, for he has been battling a back injury since he embarked on a rare post-Wimbledon clay season.

After an unexpected loss to Sergiy Stakhovsky in the second round at the All England Club, he took advantage of his summer recess back in Switzerland to try out a new, larger racket, and first opted into the Hamburg 500—where he lost in the semis to another player ranked outside the top 100, Federico Delbonis—and then the Gstaad 250.

There, having fallen to No55 Daniel Brands in his first match, Federer admitted he had physical problems: “I’ve had serious problems with the back. I had to get some anti-inflammatories last week in Hamburg due to the pain. I will have to do a lot of exercises and see how it all feels.”

Federer has enjoyed a near injury-free career but has had to manage a back problem on a number of occasions. In 2008, for example, he received on-court treatment at the Masters Cup in Shanghai, losing two round robin matches to fall short of the semis for the only time in his 11-year participation in the end-of-year showdown. Most recently, he tweaked his back during Indian Wells.

He added after Gstaad, however: “I’m positive and I felt that it was getting better during the last few days.” He is due to return to action at the Western and Southern Open in Cincinnati, where he is the defending champion.

While Federer’s absence from the Rogers Cup may be the biggest blow to the Montreal tournament, it is far from being the only one. On Wednesday, tournament director Eugene Lapierre announced the withdrawal of world No8 Jo-Wilfried Tsonga.

The popular Frenchman said: “I am sorry that I won’t be able to play in Montreal, a tournament and a city with friendly fans that I really appreciate. I need to continue to rehab my knee that I injured at Wimbledon. I hope to be ready for the US Open at the end of August.”

Tsonga was forced to withdraw from his second round match in London because of a left knee injury. The last time he came to Montreal in 2011, he reached the semi-finals before falling to eventual champion Djokovic.

Then on Thursday, Tsonga’s compatriot, No49 Gael Monfils, pulled out after injuring his ankle in training.

He said: “I am frustrated and disappointed that I am unable to come through on the faith that Eugene put in me by giving me a wildcard. I sprained my ankle in practice this morning and received treatment before returning to the court to find that it was too painful. My doctor strongly advised me to be careful and take 10 days of rest.”

Other men on the casualty list are Americans Mardy Fish and the No22-ranked Sam Querrey. Fish, who made only his third tour-level appearance this season in Washington after being sidelined with ongoing issues, cited personal reasons.

Juan Monaco, the world No31 Argentinian who made a run to the finals in Kitzbuhel this week, and in-form Spaniard Tommy Robredo, back to No23 in the rankings, also joined the exodus.

Montreal Masters 2013: Who can halt Djokovic, Murray and Nadal?