Montreal Masters 2013: Milos Raonic and Vasek Pospisil both book their places in the semi-finals on home soil 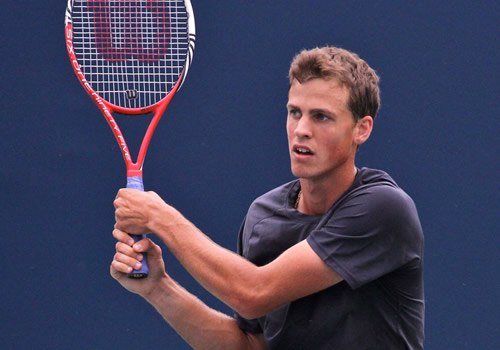 Vasek Pospisil is through to the semis on home soil Photo: Ma

As the Rogers Cup quarter-finals got under way in Montreal, the sun continued to shine on a home nation that was celebrating two of its own reaching this stage for first time since 1989: No11 seed Milos Raonic and the wild card world No71, Vasek Pospisil,

In truth, this Friday did not dawn the brightest of days: It was heavy with cloud and humidity, with all the signs of gathering thunderstorms for the second time this week.

But the optimism and good cheer around the Uniprix Stadium were palpable, and even more so since both men now faced unseeded players. There was every hope that at least one of the home favourites would reach the first Canadian Open semis since 1969.

But while the burden of expectation sat more heavily on the big frame of Raonic—already the owner of four titles from seven finals—it was his lesser-known compatriot who had stolen the Montreal spotlight.

Pospisil is, in fact, the elder by six months, and only an inch shorter at a rangy 6ft 4in. As teenagers, they played one another four times, with Pospisil winning three of them, but it seemed to take longer for him to grow into his frame and talent. The latter was certainly there for all to see as he broke the top 100 last summer—notably in taking David Nalbandian to three sets in his opener at Queen’s. He was also winning Challengers and then reached the quarters in Kuala Lumpur.

But at the end of 2012, he was hit by glandular fever and missed the Australian Open. Back this season, he won the Johannesburg Challenger, took Mikhail Youzhny to five sets in the second round of Wimbledon to break the top 100 again. Then he reached his first main tour semi-final in Bogota, and last week reached a career-high 71.

So Pospisil was poised for a breakthrough, and where better than on the fast courts that suit his big all-court game in front of home support?

He beat John Isner, Radek Stepanek and, his first top-10 scalp, Tomas Berdych in an inspired, gutsy performance that combined the strengths of the big Czech with nimble movement and an enthusiasm for attacking the net.

His increasingly confident tactics have been helped, he revealed in an interview with the ATP website, by former professional Frederic Fontang:

“We are trying to add a level of aggression into my game and play faster…I have always had it in me to play aggressively, but I tended to be more passive.

“We have worked really hard to try and take my game to opponents. That means not getting bogged down in long rallies and striking the ball early, and on the rise.”

This aggressive style showed again when he faced Nikokay Davydenko on a Canada-packed afternoon. Although it was to be a short-lived affair, the crowds still had something to cheer, for the Russian, run ragged already in the opening three games, retired ill. Pospisil had matched that 1969 record and broken more new personal ground, a first Masters semi-final, and the cusp of the top 40.

He admitted to tiredness after his three-setter against Berdych, so his truncated quarter-final could be just what the doctor ordered: a chance to recharge the batteries a little. What may be more exhausting for him, however, are the off-court demands—endless press and interviews, adoring fans at every turn and, in case he expected a quick escape after Davydenko’s retirement, a quick display with ball kids and countless autographs.

He would have to wait a few more hours to find out whether he faced fellow Canadian Raonic in the semis, and what would be a true dilemma for the Canadian fans. Raonic, who beat a below-par Juan Martin del Potro despite a shoulder spasm, took on Ernests Gulbis in the day’s second match.

The Latvian has proved very popular here, a mercurial personality with an, at times, flamboyantly brilliant game. It got him past two seeds, including No2 Andy Murray—and he left court with cheers ringing in his ears.

But this was different. He was dangerous, with a 14-3 record on hard courts this year and a Masters semi in Rome as a 21-year old in 2010. Patriotic loyalty showed itself early, with fans clapping errors from Gulbis and he sarcastically clapping them in return. But there was little between the two men: Gulbis matched Raonic in serving, the vastly-improved movement of Raonic handled the slice and drop shots of the Latvian.

They edged to 5-5 with the same number of points on the board, but a nervy service game from Raonic at 5-6 almost lost him the set. He compensated for two double faults and two break points with some big serves, earned the tie-break, and snatched the set, 7-3.

Gulbis flared up, broke his racket, took on the booing, and quickly moved on to break in the opening game of the second. By the time he served out the set, fighting off two break points, the sun was baking down and the match heating up nicely.

They exchange breaks mid-set in the third as both cranked up the level. The umpire had to allay the booing at 4-4 by explaining Gulbis’s racket-change mid-game was due to a broken string, not before the Latvian applauded them again.

Raonic was not ready to be distracted in any case. He held with an ace, and played faultless, attacking tennis to break Gulbis for a famous win, 6-4.

The Globe and Mail ran a contest last week to suggest a new name for Canada’s August holiday. They could do worse than check out which Canadian tennis star makes it to the final in Montreal.