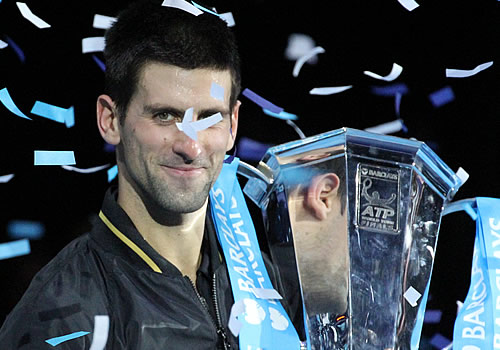 Novak Djokovic may have been thwarted by John Isner in his record-making attempt to win the complete set of Masters titles in Cincinnati this week, but his quarter-final finish did ensure his place at the tour’s climax in London in November.

The Serb became the second player in the rankings race to guarantee his place among the elite eight men at the World Tour Finals, where he is defending champion: In 2012, he won all his round robin matches before going on to beat Roger Federer in the final.

In talking about his qualification, Djokovic was both cautious and confident:

“[Being defending champion] adds a little bit of extra expectation and pressure. Knowing that I can play that well on the centre stage gives me enough reason to believe that I can do it again. That is something that inspires me to prepare well and perform my best.”

It will be Djokovic’s seventh consecutive year at the tournament, earned by titles at the Australian Open, Dubai and Monte Carlo and a finals finish at Wimbledon. He will also be hoping to seal the end-of-year No1, as he did last year, though his task has became rather tougher since Nadal’s victories this month in Montreal and Cincinnati.

Nadal now heads the ATP Race to London by well over 2,000 points, and his form through the US Open series suggests he will be hard to chase down by the time the 12-month cumulative rankings and the calendar race converge at season’s end.

Andy Murray is currently third in the race, 1,300 points behind Djokovic, as he heads towards the defence of his US Open title.

The remaining five places plus two reserves, are currently filled by: David Ferrer, Juan Martin del Potro, Tomas Berdych, Federer, Jo-Wilfried Tsonga (though he is currently out of competition with injury), Stan Wawrinka and Richard Gasquet.

There is, however, a more immediate, and very lucrative, race still being run as the tour builds towards the North American hard-court climax at Flushing Meadows next week.

The Emirates Airline US Open Series Bonus Challenge Standings are also headed by Nadal following his title run in Cincinnati, but Isner is hot on his tail.

The American is also the No3 seed in the last tournament of the Series in Winston Salem this week, where he will be aiming to win his third consecutive title. But Isner needs only to reach the semi-finals to regain the lead in the Bonus Challenge race, having won in Atlanta and reached the finals of Washington and Cincinnati.

As leader of the race, Isner would be able to maximise his earnings at the US Open. Should he fall in the first round, he will still earn a $15,000 bonus over and above his prize money, but a semi-final finish would guarantee him an additional $250,000, while the title would see him claim a $1 million bonus.

The US Open’s famous bonus scheme claims the record for the biggest payout in tennis history, $2.4 million in 2007, when Federer added the maximum bonus to his $1.4 million prize for winning the men’s singles title.

So there are big incentives for Isner on his favoured American hard courts, but if he continues to build on his success as the tour heads towards autumn’s Far East swing and the indoor season, he may even push himself into contention for that bigger race that ends in London.

That would be a career-topping achievement for the American, but for a man who beat Gasquet, Milos Raonic, Djokovic and del Potro—and pushed Nadal to two tie-breaks in the final—in the space of a week, as he did in Cincinnati, maybe anything is possible.

US Open 2013: No3 Murray seeded to draw both Djokovic and Nadal