Preparations are under way in the Santiago Bernabeu directors’ box for the unveiling of Gareth Bale, according to reports 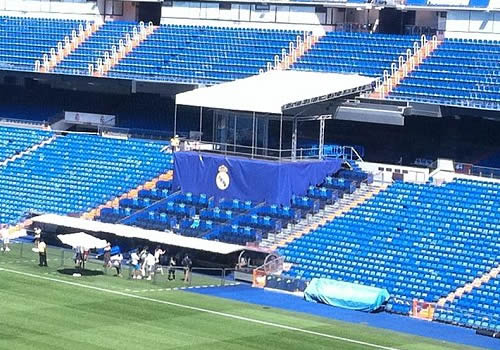 This photo emerged on Twitter on Friday afternoon Photo: Twitter/juanjimenista

Preparations are under way in the Santiago Bernabeu directors’ box for the unveiling of Gareth Bale, which could take place as early as Saturday, according to Spanish newspaper AS.

Although Real Madrid are yet to confirm a deal for the Wales international, the club does not want to leave anything to improvisation and already has its workers readying the stage which is usually used for player presentations.

Restrictions on guided tours of the Bernabeu are also expected for tomorrow. The club have had his No11 shirt ready for weeks.

Madrid and Bale have reached an agreement that will see the 24-year-old become the La Liga side’s fifth summer signing after Dani Carvajal, Casemiro, Isco and Asier Illarramendi.

In what would be a world-record transfer fee for the Tottenham Hotspur winger, the deal is set to cost around €100m (£86m).

Nevertheless, the indications are that Bale’s unveiling will be a more modest one than those of Cristiano Ronaldo, Karim Benzema and Kaká, which all took place on the pitch itself.

David James: Liverpool will get fourth place this season