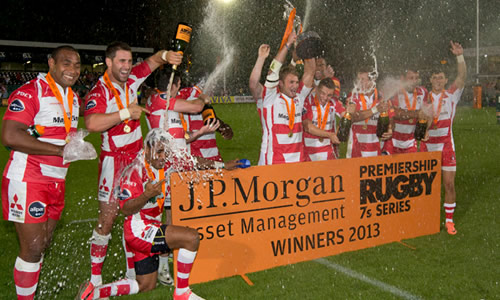 Gloucester got their hands on the first piece of silverware of the new season after defeating Leicester 24-17 to seal the J.P. Morgan Asset Management Premiership Rugby 7s series title at The Rec.

Beaten finalists last year, the Cherry & Whites proved they had learnt their lesson and held off a spirited second-half performance from Leicester to lay down an early marker ahead of the Aviva Premiership’s return.

Gloucester came flying out of the blocks, buoyed after their defeat of Saracens the game before, and held a healthy advantage at the break through two Steph Reynolds scores and one from Rhodri McAtee.

Leicester responded early in the second half with a try from Rhodri Davies, who also added the extras, and when David Williams out-paced Akapusi Qera they were just five points behind with three minutes left.

But moments later, after a good break from Drew Cheshire, Nevaro Codlin was on hand to restore Gloucester’s lead to two scores.

There was still time for Tom Pointer to go over for the Tigers, leaving them 30 seconds to grab a match-winning score, but after a poor restart the game was up with Gloucester now off to the World Club 7s.

Leicester opened the evening with a dominant 35-12 victory over Group A winners Worcester with tries from Davies, Jake Farnworth, Ollie Turton and a Stef Jones double.

Gloucester were the next side to make a statement against Group B winners Newcastle Falcons as Reynolds, picking up where he left off at Kingsholm, Gareth Evans and Andrew Bulumakau all touched down for a 21-0 win.

The Tigers then were out again and faced Harlequins knowing a win would secure them a place in the final but, after Dave Ward reclaimed a Quins kick-off allowing Jeremy Manning to score, it was an uphill battle.

Group C winners Quins doubled their advantage through Jack Clifford who showed a quick turn of pace to touch down under the posts but the Tigers responded with the last play of the first half with a Farnworth score.

A great burst from Jordan Burns set up Miles Mantella for Quins’ third try but after Joe Trayfoot was show yellow Davies powered over for Leicester before David Williams completed the 19-17 comeback in the dying seconds with a converted try.

Saracens got underway against the Falcons in game four and ran out 19-15 winners but were behind early thanks to a break from Chris Harris.

The Allianz Park outfit responded immediately however through Jack Wilson and further tries from Sam Stanley and Luke Baldwin gave them a big enough cushion despite scores late on from Simon Hammersley and Tom Catterick.

Worcester and Harlequins were playing for pride in the final game of Pool A and it was the latter who ran out 29-14 winners.

Doubles from Mantella and Jordan Burns and a Charlie Walker score had Quins well ahead while Tom Chapman and George De Cothi were on the score sheet for the Warriors.

In the final Pool B fixture the winner of Saracens and Gloucester knew they would be in the final and Martyn Thomas got the Cherry & Whites off to the best possible start with an early try.

A converted Ransom try saw Sarries take the lead at half-time and after Reynolds touched down for Gloucester it was Ransom once more that had the London club in front with seconds left.

But a break from Bulumakau gave Gloucester their place in the final with the last play of the game as they ran out 17-14 winners.

For all the news from the J.P. Morgan Asset Management Premiership Rugby 7s Series see www.jpmorgan7s.com