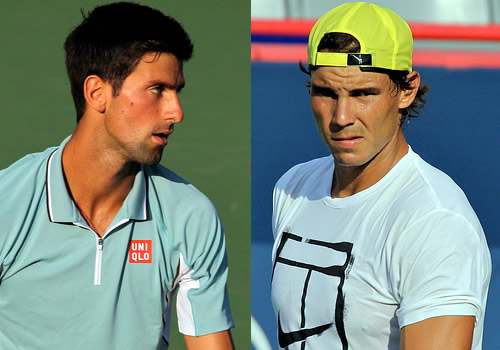 Novak Djokovic and Rafael Nadal are vying for a place in the final Photo: Marianne Bevis

It was no surprise, perhaps, that Novak Djokovic used the sterling test he overcame in his quarter-final against Denis Istomin to return stronger, more focused, and altogether more like the defending champion and world No1.

He was ruthless in dismissing the No7 seed, the hugely capable Richard Gasquet, in just 52 minutes, 6-1, 6-2 to extend his winning streak in Canada to 13 straight matches.

Djokovic was matter-of-fact in his self-assessment, as only a man going for his third straight Rogers Cup in a row may be allowed: “As close to perfection as you can be. In every part of my game I did almost my best. From the start of the match I tried to dictate the play on the court and be in control of the rallies. I’ve done really well. Of course, serve was very efficient, very high percentage of first serves, a lot of aces, a lot of free points.”

He hit 11 aces to break the Frenchman four times, and it elicited the ultimate accolade from Gasquet: “He is incredible. He is the player who impressed me most since I’ve been playing tennis.”

It took No4 seed, Rafael Nadal, a little longer to seal his own place in the semis, but then the Spaniard, whose feet can move so fast across the surface of a tennis court, is not famed for his speed between points. He dismissed qualifier Marinko Matosevic, 6-2, 6-4, in 79 minutes to and seal a highly anticipated 36th meeting against his Djokovic.

And while Djokovic’s record in Canada has been outstanding—three titles so far—clay-court supremo Nadal’s has been far from shabby: He has won twice on the hard courts of the Rogers Cup, in 2005 and 2008. And his run here this year has taken his hard-court winning streak to eight matches, having won the Indian Wells Masters this March.

But what makes this meeting so special is their history. For while Nadal’s rivalry with Roger Federer is arguably the most famous in tennis, his rivalry with Djokovic will now outnumber that by six matches, equalling the longest in the Open era between Ivan Lendl and John McEnroe.

Both Nadal and Djokovic are in the top three of active title winners: Nadal second with 57, Djokovic third with 38.

Both are also in the top three of active Masters title winners: Nadal leads with 24, Djokovic is third with 14—and not surprisingly they also feature in the top three for Masters match-wins, too.

Yet in all those 35 previous meetings, they have only met in Canada once, in the 2007 semis. Djokovic won, 7-5, 6-3, and has been the dominant man on hard courts ever since. For while the Spaniard won their most recent battle, a five-set semi-final thriller on the clay of Roland Garros, Djokovic not only won their only other match this year, on clay, in Monte-Carlo, but has won 11 of the 14 matches they have played on outdoor hard courts. The last was their record-breaking five-set final at the 2012 Australian Open. No wonder the tennis world was excited at the prospect of the latest round in this rivalry.

So ahead of one the most significant matches of the year so far, here is how the two men themselves view their own form and their prospects for the match.

Nadal, on whether his rival has the edge because of the surface

“Yes, well, the conditions here are probably more favorable for him. Yes, we are playing on hard, but especially the conditions here. Is one of the fastest courts on hard-court tournaments outdoors. Maybe that makes [him] a little bit more favourite than usual. But is something I accept. Is not a problem for me. I am happy with the way that I am doing the things this week. I gonna fight for the match tomorrow. I am excited to play against a very tough opponent, one of the best, the best today. I need to play my best tomorrow if I want to have any chance.”

Does Nadal expect a similar kind of match to their famous Australian Open final?

“I don’t know. You never know. Every tennis match is completely different. The conditions here are completely different than Australian Open. First thing, we play best-of-three, not best-of-five. Second thing, the court here is much faster than in Australia. That makes the match completely different. But, anyway, always is special play against Novak. He’s playing well. He did the fantastic match this afternoon. So he should be playing with big confidence and tomorrow will be a big test for me.”

And the key to beating Djokovic, whatever the surface?

“I don’t know. But my key is to play my best tennis. Is the only way to win against a player like him: play my best, [see if] his inspiration is not in the top tomorrow, no? But everything comes little bit together. [If] you play your best, for opponent is tougher to play his best. You play a little bit worst, for opponent is easier to play his best. Everything is a little bit up and down as usual, no? But the only way to beat against Novak in any surface, but especially here, is play aggressive and with very high intensity and very, very good feelings.”

“Well, looking at the two days’ performance, very close. Again, every match, every day is different. You can’t always feel great. But I’m going to try to memorise what I’ve done today [against Gasquet] and how I felt, and hopefully take it on the court tomorrow, same kind of feeling…You always try to do your best changes day to day. But knowing I played this well only at the third match of the hard court season since March, it’s very encouraging for me.”

How hard is it to face Nadal in the semis rather than the finals?

“I don’t find it hard. I mean I just try to focus on what I need to do. Yesterday’s match and today’s match were quite different. I was a different player on the court. I’m just happy to be playing the way I played today. For me it’s very important to try to start well tomorrow… If I’m playing as well as I did today, I think I have a chance to really win against anybody on this court.”

“He’s playing exceptional tennis. Since he came back from seven months of absence, he won everything except one title. I mean, that says enough about his game and where he is at the moment. He doesn’t show any signs of injury or something like that. But I think he’s very motivated to play well, especially at these tournaments after Wimbledon, because he hasn’t played these tournaments last year because of injury. Again, hard court is my most preferred surface. I feel that that’s maybe the place where I have more chances against him than on clay definitely. So if I get to play him, of course it’s going to be a huge challenge for both of us, but I’ll be ready for it.”