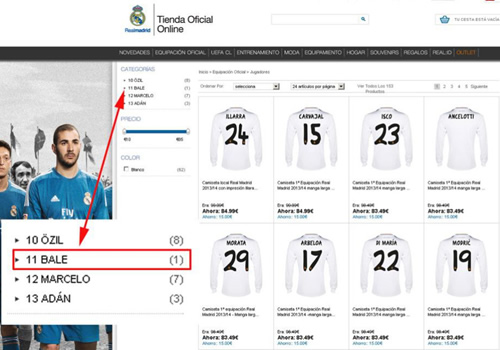 Users can purchase a shirt printed with 'Bale' on the back

Gareth Bale’s transfer to Real Madrid seems to be so on-track that, though the deal hasn’t been announced, the Spanish club’s official online store is already selling No11 shirts with the Welshman’s name on the back.

The photo above shows his name appearing between those of Mesut Özil and Marcelo. When clicking on the Bale option the store only offers a photo of the front of the shirt, not the reverse with name and number printed.

This is likely to be just another story that shows how close the deal is to being done and it’s not something new.

Last year, Real Madrid published a player profile of Luka Modric on their website without the deal for the Croat having been announced. It was quickly removed and the club stated that a “hacker” was responsible.

Since the Bale shirts were spotted on sale by eagle-eyed fans on Thursday afternoon, the online shop has been unavailable due to “essential maintenance”.