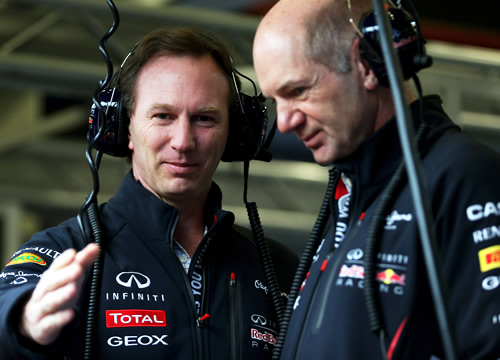 1) Red Bull Racing-Renault, 277 points
The team that continues to remain the envy of those around them. As if it were Groundhog Day, Red Bull have done it again in terms of delivering an overall package to easily remain the team to beat despite the change in regulations the FIA introduces each year. Now the odds-on favourites for a fourth-straight double championship, 2013 has been yet another sublime year for Christian Horner and company.
Grade: A

2) Mercedes, 208 points
If only the tyres loved them back. Nevertheless, the Silver Arrows can be quietly content with their opening half of season, which saw the team rack up three times as many victories as it did in as many years previously. A world title bid is still alive, but to overhaul Red Bull at this stage is an almighty challenge. Still, a strong, consistent finish to the season could be the perfect launch for 2014 – the year of development which initially persuaded Lewis Hamilton to join in the first place.
Grade: B-

3) Ferrari, 194 points
In Italy, they don’t look too fondly on playing second fiddle. 2013 is once again proving to be just as challenging as the last three years, which is ultimately a shame considering the amount of effort being provided by a certain Spaniard. A technical reshuffle at the team is imminent.
Grade: C

4) Lotus-Renault, 183 points
You will find this team in the kitchen at parties; always there or there abouts, just unable to make that step to consistent race winners. Within the team, Kimi Raikkonen continues to outdo himself, while Romain Grosjean toils. A solid effort, but with each improved performance, 2014 becomes an even bigger anticipation.
Grade: B-

5) Force India-Mercedes, 59 points
Only in Vijay Mallya’s dreams would he have ever seen his team ahead of McLaren at the halfway stage as the season began. The Force India has the pace, and points have duly followed for both Paul di Resta and Adrian Sutil. The team continues to move its way up the grid, determined to spoil the party. A commendable effort so far.
Grade: B-

6) McLaren-Mercedes, 57 points
How does one team tumble so far, so quickly? A year ago, McLaren headed to Spa fully confident of victory. This year, a modest point’s finish will be the target. The team are bemused as to how far they’ve dropped, and plans for 2014 are already under way given their predicament. Regardless of how they do in 2014, 2013 will remain one of the team’s darker years should their form fail to improve.
Grade: D

7) STR-Ferrari, 24 points
The best of the backmarkers by a long shot, and it’s nice to see them giving their drivers a chance of being competitive – considering what team up the grid they’re ultimately trying to impress. A consistent finish to the season will be key, in order to attract key sponsors for the coming year.
Grade: C+

8) Sauber-Ferrari, seven points
Yet another team that has suffered a sharp downturn in form. In hindsight, it’s been no surprise given the lack of sponsorship that was on the car at the beginning of the season; lack of funds equals lack of development. Investment from Russia announced in the last month will undoubtedly help, but it could be a long final half of the season nevertheless.
Grade: D

9) Williams-Renault, one point
2012 appeared to be the year Williams were beginning to make their return to competitiveness. Suddenly, 2013 rolled around and the team found itself back at square one with a right dog of a car. Having an inconsistent pay driver and a rookie hasn’t exactly helped, but with 2014 already in the pipeline, don’t be expecting too much improvement here.
Grade: D

10) Marussia-Cosworth, no points
It hasn’t been much of an improvement, but at least they’re trying. As has been in previous seasons, Marussia continue to struggle to get out of Q1, and find themselves continually at loggerheads with Caterham. That said, the team has managed to provide more performances of merit than its backmarker rivals; credit where it’s due.
Grade: C-

11) Caterham-Renault, no points
Like Tony Fernandes’ other venture, Queen’s Park Rangers, Caterham remain the team you love to hate. The money and investment is undoubtedly there, but the progress isn’t. Another barren season looks to be on the cards, and one wonders how many more years Fernandes will give it.
Grade: D