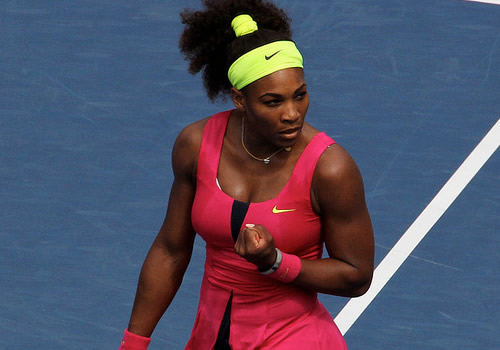 Serena Williams blasted her way past Sorana Cirstea to win the women’s Rogers Cup title in Toronto with a 6-2 6-0 victory on Sunday.

The world No1 wrapped up her 54th WTA title to move into into sole possession of ninth place on the Open Era titles list.

“I knew she had had a lot of big wins and a lot of momentum going into this match,” said Williams, who has now won the tournament three times, after the match.

“She also had nothing to lose out there, so I knew it wasn’t going to be an easy match for me today. I knew I had to play better today than last night. With that in mind, I just tried to do that.”

The title is Williams’ eighth of the year, matching her personal best for most WTA tournaments won in a season, having also won that many in 2002.

Romania’s Cirstea added: “It’s been a really positive week, and I’m going to take everything that’s been going well with me to the next tournament.

“I think I’ve made great steps in the past weeks – I’ve played semis, quarters, finals here – so I’m looking forward to everything coming up and also the US Open.”