Stuart Broad, Joe Root and Matt Prior all tweet their thoughts after England win the Ashes thanks to a fourth Test win in Durham 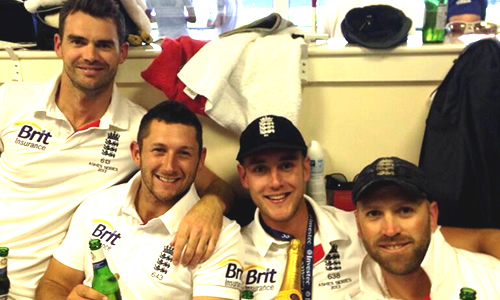 Stuart Broad took an incredible 11-match wickets as England beat Australia by 74 runs in the fourth Test to win the Ashes in Durham.

The 27-year-old England bowler picked up seven scalps as Australia collapsed from 168-2 to 224 all out after tea to hand England a 3-0 lead in the series.

Here is a selection of The Sport Review’s favourite tweets as Alastair Cook’s men won their third successive Ashes series.

England wicket-keeper Matt Prior ‏(@MattPrior13) also hails Broad: “So proud of the lads! Belly amazing again and my mate @StuartBroad8 was just epic! Showed his class and changed the day. Amazing effort!”

Ex-batsman Mark Butcher (‏@markbutcher72) pays credit to the Aussies: “Not easy chasing 300 to win in the final innings of a test… #flyfishing”

A disappointed Graham Onions ‏(@BunnyOnions) tweets his thoughts: “Did anyone else have goose bumps watching that final wicket go down? Imagining how good it would have been to play at ‘my home of cricket’”