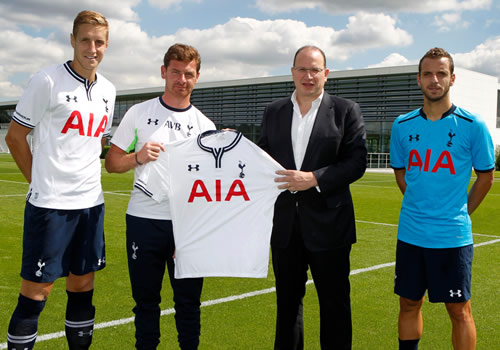 The AIA brand will appear on the front of Spurs’ shirts during all of the club’s matches in the Europa League, FA Cup and Capital One Cup.

AIA replaces bank Investec, which has featured on the club’s strips in the cup competitions for the last two seasons.

Spurs chairman Daniel Levy said: “We are delighted to welcome AIA, one of the world’s leading life insurers, as a Tottenham Hotspur Partner.

“AIA has a unique and long history in Asia, and today is a high-growth company and a clear market leader in their field.

“We are pleased to have the AIA name on our shirts, particularly given the stature and strength of the AIA brand.

“We look forward to working closely with AIA over the coming season and introducing our club to more fans in AIA’s home, the dynamic Asia-Pacific region.”

The announcement of AIA as cup shirt partner follows the Tottenham’s confirmation earlier this year of HP as the club’s Premier League shirt sponsor.

Chelsea transfers: Moyes insists Rooney is NOT for sale again