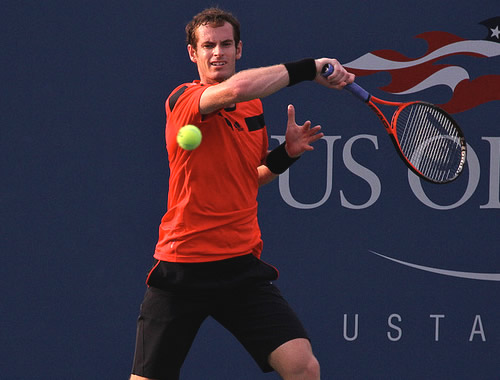 A quick look at the CVs of Andy Murray and the man he would play in the second round of the US Open, Leonardo Mayer, throws up one striking feature.

They were born, just over 26 years ago, on the very same day. But while they would both go on to become professional tennis players, there the similarities seemed to end.

Their places of birth could not have been more different: Murray in the small and chilly cathedral town of Dunblane in Scotland; Mayer in the warm and humid city of Corrientes, in colourful north Argentina.

And by the time they engaged in battle on this hot Friday, Murray had played in seven Grand Slam finals, winning two in the last 12 months. He had also become an Olympic gold medallist, had 28 titles to his name, earned prize money of $30 million plus multiples of that in sponsorship.

Mayer had won not a single title, indeed had won only 60 matches in 136 played, and earned around $1.5 million.

Murray was ranked No3, recently No2, and the defending champion here in New York, while Mayer was No81 and looking to equal his best ever showing at the US Open—his third-round finish last year.

So two tennis paths that had begun on the same day had diverged to become what looked like a David-and-Goliath scenario. And if that was not enough, Murray had looked in pitch-perfect shape, despite the long delays to his opening match, in making 34 winners to only five unforced errors against Michael Llodra. In contrast, Mayer had survived four tough sets, 7-6, 6-4, 3-6, 7-6.

What took most of those watching by surprise was the style of game that Mayer brought to court. The Argentine, who has played most of his tennis and won most of his matches on clay, arrived with an attacking serve-and volley game, rushing the net if not on the first point then on the second. Add in a single-handed backhand that played slice and volleys with apparent ease, plus a serve that cranked up to match Murray’s at over 130mph, and it proved to be an explosive start.

The Armstrong arena was packed and baking hot. The tennis started just as hot, characterised by an opening game of volleys, lobs and frantic chases. It earned Mayer a break point, and then another, but a fluffed volley let Murray off the hook.

And so the opening games progressed, Mayer on the attack with some fine volleying and off-forehand winners, and Murray resisting with his own big serves and great defence. Mayer served second, but he was holding more easily than his opponent until the 10th game. Mayer hit a couple of over-enthusiastic forehands to give Murray a break point. He saved it and held serve with a smash.

It took just one weak game from Mayer, a couple of tired forehands pushed long, to give Murray a break chance, and a wide forehand from the Argentine sealed the set for Murray, 7-5.

It had been bold tactics from the Argentine and it showed in the error count, 22 of them, but he also made more than twice as many winners as Murray. What the impact of such an energetic hour of tennis would be on the less experienced man remained to be seen: He took a comfort break for a change of kit, and Murray changed into his night-time red.

Certainly during the course of the second set, Mayer began to look drained as he tried to summon another effort in the face of a disappointing end to Set 1. He sprayed errors, 12 of them for only six winners, while Murray, now looking in control, made only three errors. He raced to the second set, 6-1 and looked on his way to Round 3, but Mayer got a second wind.

In a repeat of the first set, the Argentine went on the attack again, hammering forehands wide to draw the errors, or finishing at the net. Murray, perhaps expecting an easier ride, was caught out on his opening serve, and Mayer broke to take a 3-0 lead. Mayer almost broke again in the fifth, but Murray fought off four break points.

Then it was Mayer’s turn to defend break points and did so with an ace, then with a clean smash. He served out the set with a couple of aces and a serve-and-volley winner, 6-3.

Again, Mayer took a comfort break while Murray changed back into daytime white, but he was not amused by the delay. It seemed, though, to fire him up. He urged himself on after every point. He attacked Mayer’s serve but the Argentine turned on some almost Federesque shots—a sliced backhand followed by an off forehand drop volley—to hold.

Now, though, Murray was playing every shot in the book, clearly determined to wrench control. Mayer, perhaps realising this was an all-or-nothing moment, over-reached, pounded his forehand long and his backhand into the net, and Murray broke twice. Amid a furious 32-minute conclusion, there were some crowd-thrilling moments—drops, picked up drops, lobs and smashes—but almost all went Murray’s way. He served it out, 6-1, to an ecstatic reception.

Already back in the locker room was his next opponent, by coincidence another Mayer, this time Florian. He, like his namesake, can turn on the style with attacking, all-court tennis and was a top-20 player last year—though has since dropped to 47. It will be an intriguing match-up.

In the doubles draws, men’s No16 seeds Dominic Inglot and Treat Huey advanced to Round 3, as did No12 seeds, Colin Fleming and Jonathan Marray, and the unseeded Jamie Murray with John Peers. Heather Watson lost her first-round doubles match with Vera Dushevina, and Colin Fleming lost his mixed doubles first-round match with Nuria Llagostera.