US Open 2013: Dan Evans extends his superb run with victory over Australia's Bernard Tomic in the second round 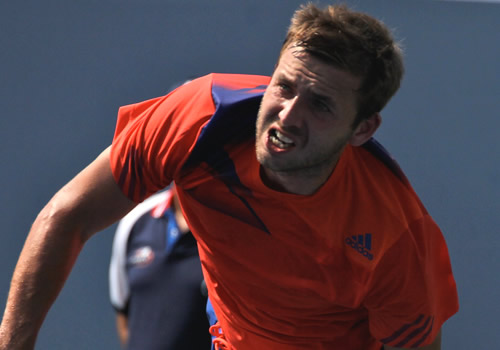 Dan Evans is through to the third round at Flushing Meadows Photo: Marianne Bevis

When a Grand Slam’s biography on one of its players displays a blank where his height and weight should be, you know this is a man who was firmly under the radar before the US Open got under way.

After all, Daniel Evans, the 23-year-old Briton who, in many people’s judgement, has underperformed through much of his pro career, has only twice before played in a Grand Slam, and that by virtue of wild cards at his ‘home’ tournament at Wimbledon.

Little wonder, then, that he is ranked just 179—but that ranking masks a few important facts.

A year ago, Evans was hovering around 400. At the start of 2013 he was still at 297, slipping to 367 in the spring. Then things took off, and the man who has admitted to not having worked hard enough—and had his LTA funding cut as a result—has made huge strides in the space of a few months.

Much of the turnaround seems to have come from the belief of other people. There was the conversation with his father about money—the kind that many parents have with their kids, except that the parents of tennis players travelling the circuit have to dig particularly deep.

Then there was his selection for the Davis Cup squad by Leon Smith, who not only recognized Evans huge talent but decided to give him a chance to prove it. That faith paid off: Evans lost a close five-setter against the 67-ranked Dimitry Tursunov but bounced back to beat No80 Evgeny Donskoy in a dominant three sets. The decisive win took Great Britain in the World Group play-offs next month against Croatia.

Evans identified this as a vital part in the success—and attitude change—that followed: “Everyone at the LTA has shown a lot of belief in me, you know, rightly or wrongly.

Evans has since gone from strength to strength, winning a second Futures event, reaching the third round at Queen’s and, since taking to the Challenger circuit on the North American hard courts, reaching two significant finals.

And with the US Open, he has taken a new stride, not just in qualifying for his first Grand Slam by right, but by beating the hugely talented No11 seed, Kei Nishikori, in straight sets.

Evans, for one, was neither surprised nor fazed: “I mean I knew I was a good player, but I just hadn’t put it all together. I was pretty calm today. It wasn’t that much of a big deal what was happening on the court. I wasn’t nervous serving it out. Just played another good match. I’ve played some good matches for the last five weeks. It was just—like I really want to go far in the tournament, win a few more matches.”

He set up a particularly intriguing match against another man who has also had his share of problems, Bernard Tomic.

Tomic is a prodigious talent—he was a former junior world No1—who reached the Wimbledon quarter-finals two years ago, age just 18. He won his first tour title this January but, like Evans, he has also admitted to lack of effort. Unlike Evans, he was dropped from Australia’s Davis Cup because of his poor attitude.

Clearly handling fame and success so young turned the Tomic head—appearances in court for driving offences have made headlines more than once—and his cause has not been helped by a father (and coach) who has been in trouble in with the authorities for his behaviour on the tour. The US Open is the latest tournament to deny Tomic Snr admission.

Nevertheless, Tomic remains ranked 127 places above Evans at 52 and once again performed well on Wimbledon’s grass to reach the fourth round. But with second-round finishes in the last two years in New York, he had something to prove, and had shown some real grit to pull out a win from two sets to one down against Albert Ramos in the first round.

And so to Evans’ height: It became clear when he arrived on his first show court appearance at Flushing, the cauldron of No17, that he is, by tennis standards, not tall. At 5ft 9in, he is a full eight inches shorter than Tomic, but in their tennis skills, as in much else, there was plenty to admire.

Both boast creativity, touch and variety around a tennis court. Evans may have one of the rare single-handed backhands among young players on the tour, but it produces wonderfully crafted angle and slice—as does Tomic’s double-hander.

In the first set, though, Tomic looked every inch the more experienced player, with Evans rushing, making errors and uncertain about his net approaches. Tomic was rewarded with the first break in the fourth game and another in the seventh to take the set, 6-1, in just 22 minutes.

Tomic opened the second strongly as well, serving well and finishing cleanly overhead. Again he got the first break, but Evans broke straight back. They exchanged another break each but this time, Evans, now playing with more assurance and more aggression, took the extra decisive break to take the second set, 6-3.

It was a turning point for Evans. He upped his offensive tactics, came forward, and finished with touch and confidence—and his mobility and movement serve these skills perfectly. Nineteen times in the third set he came to the net and 17 times won the point.

Tomic made the mistake of remaining too passive, hoping perhaps that the Briton’s storm would blow out, but success bred success. They shared a break each but headed to a tie-break, and Evans slotted forehand winners and continued his fearless volleying to rapidly serve out the set, 7-3, for a two sets lead.

In truth, Evans now had the look of a man who had no intention of losing. He knew he had his man, kept the ball low to draw errors from the tall Australian, and simply outplayed him on serve and off the ground. He made four aces in the final set, broke twice, and played nervelessly to the match’s 6-3 conclusion.

So another big scalp for Evans, whose self-belief has become almost palpable. He began the match looking uncertain, nervous perhaps, but ended it full of running, intent and attack—and treading more new territory.

His next opponent will be either Frank Dancevic or No19 seed Tommy Robredo, but beyond that lies, most likely, Roger Federer, with whom he enjoyed an indoor practice during yesterday’s rain.

The Sport Review asked Federer view of this newcomer on his horizon: “I thought he played really nice; got a great shot. Still a little bit surprised he beat Tomic, because we know what Bernard can do, but great effort for him. To be in a third round of a Slam is a huge opportunity. Doesn’t get easier from here, but it should give him a ton of confidence. And it’s great for Britain, no doubt about it.”

That summed it up to perfection. Evans makes it two Britons already in the third round—Laura Robson plays Na Li tomorrow—with Andy Murray aiming to beat Leonardo Mayer tomorrow to join them.