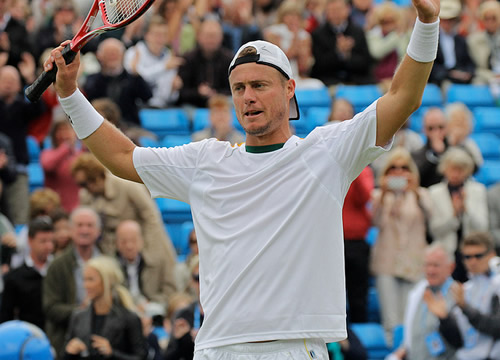 It was a surprise, but at the same time should have been no surprise at all.

Amid all the big names playing for their place in the third round of this year’s US Open—both former and defending champions Novak Djokovic and Andy Murray among them—one name jumped off the page. Lleyton Hewitt won his first Grand Slam here in New York in 2001, aged just 20, and he was back in action at the US Open for the 13th time.

And what put his match centre stage, the feature night match on Arthur Ashe on first Friday, was that he was facing another US Open champion, Juan Martin del Potro, the only man to break the Grand Slam dominance of the ‘big four’ of Djokovic, Murray, Nadal and Federer since 2005. He won here in 2009, the one Major in the last 34, and he was tipped by many as a possible dark horse to break the stranglehold of the quartet again.

But that was to reckon without Hewitt, now aged 32 but with the same competitive fire as the day he won here 12 years ago. His fans need only point to his run here last year, newly back on tour after the latest in a catalogue of surgery. He won a four-set first match, then took almost five hours to win his second in five sets, and against perhaps the only other man to compare in blood-on-the-court effort, David Ferrer, he took over three hours to finally concede in four sets.

But the context of the pugnacious Australian’s career makes his achievements even more outstanding. After winning the US Open in 2001, he went on that year to become the youngest man in the history of the ATP rankings to claim No1. The following year, he won Wimbledon and in 2004 he was runner-up in New York. He three times reached the semis here, too.

And yet his story is littered with injuries and surgery and, for a man whose energy and effort leave a blur across the court, anything less than 100 percent fitness is like throwing the off switch. In 2008 he had hip surgery, in 2010 it was surgery on the other hip followed by a hand injury. In 2011, he had foot surgery, battled with a groin injury and missed the end of the year with ongoing foot problems. Last year he had more foot surgery, and came to New York ranked 125.

This year, still unseeded and thus facing seeds at every turn, he continued to throw upsets into assorted draws. He beat John Isner at Indian Wells, then Grigor Dimitrov, Sam Querrey and Del Potro at Queen’s to reach the semi-finals. At Wimbledon, it was No10 seed Stan Wawrinka, and he reached the final at Newport. Hitting the North American hard courts, he reached the semis in Atlanta, and back in New York, took four sets to beat Brian Baker.

But Del Potro looked a hurdle too big: He arrived with a semi finish at Cincinnati and the title in Washington to his name, and had beaten Hewitt in both their previous hard-court meetings.

But, again, that is to underestimate Hewitt. The Australian won the first set and served for the second, but Del Potro began to find his formidable forehand and Hewitt helped him along with two double faults for a timely break back. The Argentine served out the set, 7-5, and opened with a break to lead 2-0 in the third. When he served out the set, 6-3, all the safe money was on the Argentine to run away with match.

Even at two sets to one down, though, it is a mistake to count out the warrior that is Hewitt. Once again, he took an early lead in the fourth set but Del Potro broke at 5-3 and they headed to a tie-break—hardly the ideal scenario for the 5ft 11in 32-year-old in the face of the huge delivery of the 6ft 6in 24-year-old.

But Hewitt now turned on some of the finest tennis of the tournament so far, a blistering array of backhand passing shots, great serving, and lunging shot-making from all over the court. He surged to a 6-0 lead, hesitated briefly, and sealed the set, 7-2, in what he later called “one of the best tie-breaks of my life.”

The packed Ashe, already in fine voice, now turned up the volume as only the US Open crowd can. This was show-stopping stuff and suddenly, Hewitt looked not just back in the contest but the favourite, as Del Potro lost a half step in speed and some edge on his backhand—troubled, it seemed, but a recent left-wrist problem.

Sure enough, Hewitt looked invincible, twice throwing himself onto the unforgiving hard court in his efforts to retrieve every shot. He broke Del Potro three times in the final set, taking a famous victory, 6-1, in three minutes over four hours.

So Del Potro made his earliest departure from New York since his first visit, a first-round loss in 2006, and admitted that his wrist was not 100 percent: “The wrist is not the way what I like, but what I say is not excuse.”

He went on to express what everyone else thought: “He played impressive. The tie-break on the fourth set he made very good passing shots. He’s a great champion and a great fighter.”

For Hewitt, the fire is clearly undimmed: He was excited simply at the prospect of playing in front of the biggest tennis crowd in tennis:

“I was pumped up when I won my first-round match because I knew [I was] playing Del Potro, a past champion and a great player as well, so there was an opportunity to play on Arthur Ashe. I don’t know how many years I’ve got left in me, I keep getting asked the question, so I was just hanging to get out here and play on this court again and try to put on a great show.”

So he embarks on the third round, just as last year, after a marathon effort. But this time, he does not face the likes of Ferrer but the unseeded Evgeny Donskoy, who came through his own five-set battle to win his first match in only his second the US Open.

So who knows where the Hewitt story will end this year? Should he reach the fourth round, he will face another over-30 man, either Mikhail Youzhny or the oldest in the draw, Tommy Haas—one of the few men who can match Hewitt for injury setbacks.

Hewitt’s words last night could apply to Haas as much as himself: “This is why I still play—to have moments like this.”

And as long as he has the heart and legs to do it, every fan of tennis will be there cheering.