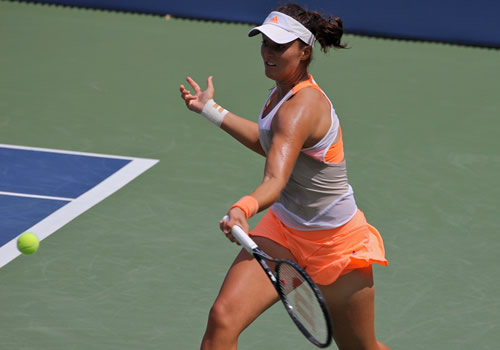 It’s a special day in a Grand Slam when two British No1s headline on the biggest show courts on the same day. But that was the scenario at the US Open as the tournament headed into its raucous weekend of Labour Day.

But after the minor furore surrounding the scheduling of defending champion, Andy Murray—he played the last match of the men’s first round a full two-and-a-half days after Rafael Nadal had played one of the first—he was not the Briton to open on the biggest stage of all, Arthur Ashe. In what might be seen as another snub to one of the favourites for this title, he became the only one of the ‘big four’ to play a match on the second stage, Louis Armstrong.

Last year in New York saw Robson, then ranked 89, beat Kim Clijsters in the second round before facing two more Grand Slam champions in the next rounds. This year, seeded herself for the first time, she has avoided seeds until Round 3 but, as luck would have it, she met the very same woman, Na Li, the 2011 French Open champion, in the same round.

Back then, she won in three sets. This time, Robson was ranked 32 and Li had already been a finalist at the Australian Open. This could be another close battle.

It was, this being a Friday morning in New York, a thin crowd to greet them. Even the spider cam was still swathed in plastic, but these two women have some of the strongest followings outside the US. Li is perhaps China’s most famous athlete while Robson is dubbed, here in New York, “the darling of British women’s tennis”. So the hundreds were vocal, but seemed unable to lift Robson’s game.

She started slowly, conceding a break point in the first game with what would become a growing tally of errors. She was broken, and Li was soon into her stride, holding a clean game with her characteristic clean, flat and angled hitting.

She is a beautifully balanced athlete with great movement, and when she is contacting the ball well, she is hard to break through.

Last year, Li’s play was more erratic, less offensive. Perhaps that, and the help of her coach of the last year, Carlos Rodriguez, was behind this more focused and clear-sighted start.

Robson, for her part, played erratically, unable to contain the balls coming at her baseline with such pace and precision. She held her next serve but was broken again in the fifth and took just one more game in the set. Li, serving impressively, served out to love with her fifth ace.

The Briton opened the second set strongly, though, and it looked as though this may turn into a three-setter like last year. Robson at last managed to get into some rallies, winning the longest of the match so far in her first service game. She then turned the tables on Li, jumping all over the Chinese woman’s second serve with her formidable leftie forehand. It earned her two break points—her first of the match—and she took the second to lead 2-0 and then 3-0.

Now Li’s serve started to penetrate again and she took her first game of the set with two aces. She unleashed more clean forehands and backhands angled to each corner, broke back, and with an hour on the clock, they were level at 3-3.

Robson had the advantage of serving first but could make little more impression on the Li serve. Just short of the tie-break, Robson gave a small opening to Li with a double fault and an over-long forehand, and a vicious return of serve from Li snatched the break.

Robson saved her best for last, but Li’s best was still too good. After some fine rallies, and a deuce, Li served out the match, 7-5.

And so Li, a full dozen years older than Watson at 31, exacted revenge. She sits in the Radwanska quarter and, in this form, has a chance to equal her best showing in New York, her quarter-final finish in 2009. She may even get past Radwanska to the semis: Li beat her on the way to the Australian final this year.

Robson, though, falls just short of the fourth round—though considering her lack of preparation coming into New York after a wrist injury forced her out of the US Series, she should draw some satisfaction.

But she probably won’t: She is too good a player with too much ability and ambition for that. She was, though, pragmatic: “I’m disappointed about today, for sure, and I thought I could have played a lot better. But I always knew it was going to be a tough match. All in all, I guess it was an average week.”

Though on the longer view, she was more upbeat: “I feel I’m a more confident player [than last year]. In my first two rounds I thought I played really well and I closed out the matches really well, which is something that, you know, has improved a lot over the last 12 months. So when I get home I will do quite a bit more training and get ready for Asia.”

It is, in any case, only a matter of time until this young woman, thriving under the coaching guidance of Miles Maclagan, strides into the second week of a Grand Slam again after she did so at Wimbledon this year.

Murray was still to come, as were multiple Brits in doubles action, including Heather Watson. High hopes still, then, for British interest in New York.