US Open 2013: The Novak Djokovic who walks onto court these days looks every inch the world No1, writes Marianne Bevis 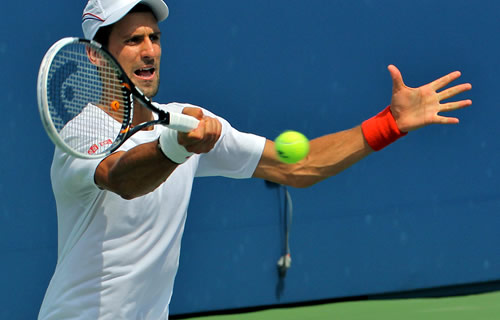 There has been so much buzz around the rest of the ‘big four’ ahead of this year’s US Open—the remarkable Rafael Nadal run, the surprising Roger Federer fade, the first Andy Murray defence—that one of the chief contenders for the title here in New York, Novak Djokovic, has managed to keep a nicely low profile.

Not that the Serb seems overly troubled these days by the responsibility that comes with being the top dog among a pack of very fine canines. As his confidence has burgeoned on the tennis court, as his athleticism and flexibility have set new benchmarks, and as the titles and rankings piled up, so his bearing has changed.

The man who walks onto court these days, and afterwards walks into the media’s den, looks every inch the world No1: at ease, full of self-belief, nothing to prove.

And with nothing to prove, he would seem to be perfectly happy for the media to focus on his rivals. It has left him the space for other things, for ‘ambassadorial’ duties elsewhere in New York—literally. He elaborated on his mission ahead of the tournament.

“The speech at the UN yesterday was something quite incredible for me. I mean, it was unbelievable day, you know. In the morning, the UN, and in the evening, the Heritage Programme [a celebration of former No1s].

“I was blown away by these wonderful opportunities, that I got personally to speak at the UN in the name of the global family of athletes around the world for proclamation of International Day of Sport, for development and peace, which will be on 6th of April. It’s something that is just out of the ordinary for me. I never have done it. I never have seen the UN offices and facilities, and I know that many big world decisions are made at that place.

“So I had a feeling all of us who came, my friends, my family, you know, that we were part of something really big. So it was a fantastic occasion.”

In just a single minute, he displayed many of those media-friendly off-court skills: The cause was worthy, the dialogue fluid and articulate, the tone modest yet assured. And it’s worth remembering that the Serb is proficient not just in Serbian and English but in several other languages too. At the French Open, he spoke to the fans in French, in Rome, he did it in Italian…and he can manage German, too.

As he said in Paris: “I like to understand what people are saying wherever I am, at least to pick up a few phrases of those languages. I was always interested in linguistics, so I would love to keep on learning and kind of developing my knowledge in those languages…

“There are some difficult languages to learn, like Chinese or Japanese. I think they are very interesting for me, because there are so many letters in the Chinese alphabet, there is like 3,000 or something, and my knowledge right now is around two or three. I’m going to get to 3,000 eventually!”

No wonder he was invited to the United Nations.

But make no mistake. None of this will divert the focus of the world No1 from the business in hand. He is as much of a contender for the US title as ever, and bearing in mind he has reached the semis here for the last six year, advancing to the final for the last three years, winning in 2011, that makes him a very serious contender indeed.

For while Nadal has stacked up the titles since he returned to the tour in February, it is no accident that Djokovic has held firm at the top of the rankings—even if his place is under threat from the Spaniard this fortnight.

He began the year with his third straight Australian Open, his sixth Grand Slam, knocked off the Dubai title and won the Monte Carlo Masters—beating Nadal, no less. At Roland Garros, Nadal took revenge in a remarkably close semi-final, while Murray beat him in the final of Wimbledon.

And while few will forget his marathon effort in the final here last year, few may remember the wave he rode through the rest of the 2012. He lost only one match, at the Paris Masters, until the semis of Indian Wells, winning in Beijing, Shanghai and the World Tour Finals.

So while his run into New York via Montreal and Cincinnati was far from perfect, he remains calm and confident.

“I thought I played quite decent in these two weeks. Just that both matches that I lost were 7-6 and 7-5 in the third set, and in important moments I wasn’t finding that maybe extra strength to be calm and to play the right shots. That’s what happens, you go through these periods.

“But my confidence is still there. This is a Grand Slam, so it is different from any other event. I love playing Grand Slams. I really look forward to it, because I like the centre court, I like the atmosphere, the spirit of the court—it’s suitable to my style of the game. It’s something that makes me very excited and, you know, motivated to play my best.”

As for his rivals, he is under no illusions: He marks Nadal as the best player of the year so far—and he knows why.

“He’s playing maybe the best tennis that he ever has played on hard court really…He was very aggressive, and it seems like he changed a little bit his game. He stepped in a little bit more. He knows that now he has to be a bit more aggressive than he usually is because of, I guess, his knees and everything and because hard court is not clay. It’s not his favourite surface; it’s faster…He’s definitely so far the best player this year, there is no question about it.”

But in reviewing himself alongside the three men who have beaten him in three of his four US finals—Federer, Nadal and Murray—he rightly sees himself as the equal of any of them.

As Djokovic comes into his opening match against the 112-ranked Ricardas Berankis, he will expect to win his 40th match at the US Open. The Lithuanian has played in the main draw here only twice before, reaching the second round back in 2010, and his results this year do not make for optimistic reading: 13 won, 13 lost, and his only top-20 win came against Tommy Haas in Houston back in April.

So Djokovic should take one small step nearer a ranking landmark. If he remains top dog after New York, he will be just two weeks short of 100, a mark only eight others have achieved since the ATP rankings began 40 years ago.

If Nadal wins the title, Djokovic needs to be with him in the final…though of course the defending champion Murray could put a stop to that: They are scheduled to meet in the semis.

NB If Djokovic wins his opening match, he could eventually face either Juan Martin del Potro or Tommy Haas in the quarter-finals, both of whom have beaten him on North American hard courts this year.