US Open 2013: Rafael Nadal takes yet another step nearer the No1 ranking

US Open 2013: Rafael Nadal eases past Ryan Harrison in straight sets in the first round to take a step closer to topping the rankings 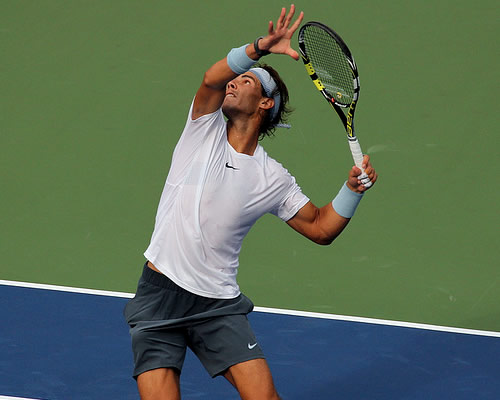 Rafael Nadal is currently ranked No2 in the world Photo: Marianne Bevis

This time last year, there was one big name missing from the US Open start list: Rafael Nadal.

His absence would, in the end, extend from Wimbledon 2012 until after this year’s Australian Open, as he rested, worked and waited for his injured knees to be fit again. The longer he was away, the harder the task that seemed to lie ahead of him.

Sensibly, when he did come back, it was to clay in South America, a rare trip for Nadal since he burst onto the big stage with 11 titles in 2005.

The signs were good—certainly for clay—as he went on a 12-1 Golden Swing run. But what of the hard courts, the surface on which he has been least comfortable? In fact it proved to be more of the same. The title in Indian Wells launched a North American onslaught that continued through the US Open swing with the Masters titles in Montreal and Cincinnati—a perfect 15-0 record, his career best.

In fact he comes to the US Open with just three losses to his name, two of them on clay: the final in his first event back in Vina del Mar and the final in Monte Carlo to Novak Djokovic. He subsequently beat Djokovic to win a record eighth French Open title.

The only hiccup he suffered was at Wimbledon, a shock first-round loss, but back in North America, he was back to his best, playing attacking all court tennis the equal of almost any he has played before.

His first ever Cincinnati title extended his Masters title lead to 26, and the equal of Djokovic’s record five Masters titles in single season. His nine titles have made this his second most prolific year since 2005’s 11—and there are still three months until the end of the season.

How has he viewed all this? He has been asked after almost every title win and, with his usual shrug of the shoulders, has talked of hard work, his support team, of the relief to being back playing after such dark months of doubt.

But the pre-tournament conference at the US Open gave a chance—or rather a demand—to talk at greater length, and he began with the tactical evolution that had brought such success on the hard courts—forward moving, serve-and-volleying, taking the ball early and inside the baseline.

“Is true I’m trying to take the ball a little bit early, that I worked on my game to be a little bit more aggressive. But at the same time, is true that in the past when I was playing well on this surface I had good success, too. So it’s not something crazy that changed today that I had the chance to play well on hard, no?

“I won, and at the same time I can lose. Like a very tough match against Novak in Montreal, anyone can win the match. Then I have very tough one against Roger in Cincinnati. Anyone can win that match. It was lucky that I won both.”

So an admission, of sorts, that he has changed his game, but also that he was ‘lucky’ to win. “Here is a different event. I’m going to keep trying my best, and I hope to be ready for that.”

And what about his knees, the object of so much conjecture over the years? There was certainly some resignation in his response—he has, since returning from his long lay-off, been reluctant to talk of them—but here, asked if he felt the hard courts were tougher on the body in general and his knees in particular, there was also a recognition that he was proving more than a measure for the surface.

“Is a conversation that we had hundreds of times in the past. You know, in the past sometimes I felt not free to talk a lot about these kind of things, because then seems that I was talking because I played much better on clay than on hard. Today I think I had good success on hard, too. I like the surface. I feel confident playing on hard. I like the hard court.

“But is true that is something that I am talking not for my generation, because that’s not going to change, but for the future generations it would be better if they, ATP, can find a solution for that. Because the hard court’s still a little bit, in my opinion, too aggressive to have a very long career.”

And it has been his unprecedented success through North America that has put him in the headlines of most conversations about the year-end No1. He leads the race in the rankings by over 2,000 points and from now until the end of the year, has no points to defend and the potential to earn many more. So with every match he wins in New York, he can only advance his cause, while his two chasing rivals, Andy Murray and Djokovic, were last year’s finalists.

But he may not have to wait until the year-end to reclaim the top ranking that he last held more than two years ago. If he reaches the final next weekend, Nadal could take over the top spot if Djokovic falls before the quarter-finals. If Nadal wins the title—and many are tipping him to do just that—he could take the No1 ranking if Djokovic loses in the semis.

He was, of course, asked about his feelings at such a prospect.

“We will see after here. This tournament will make the difference. Is true that I am having a great season. I am in a positive position…because I played amazing, because I still have three very important zeros in my computer: Australian Open, Wimbledon, and Miami. That’s a lot of zeros to be No1 (smiling).

“But I am trying. I gonna try. I said since I came back, you like a lot to talk about the No1. I always say the same: Being No1 is not my goal. My goal is be healthy, have the chance to be competitive, and finish the year with good feeling and having the chances to play well. That’s happening.”

Nadal is a fascinating character, one who thinks, and answers, and thinks again, furrowing his brow, hesitating…and then going on to say more than he needs. He continued:

“At the end, you are No1 or you are not No1. I don’t gonna go and fight for the No1. We’ll see at the end of the season. If I am No1, it will be amazing, amazing season for me. If I am not No1, it still will be amazing season for me. This tournament gonna make a big difference. After here I will say not everything will be decided, but things can be more clear and completely less clear (smiling).”

And in the context of where he was last year, it is not surprising he has such a perspective now. As he pointed out: “Last year I watched this event on the TV. This year I have the chance to be here. That’s great. All of that is fantastic for me. Now I have a chance to be ready, to compete with the right attitude, you know, try my best in every moment. I can lose, I can win, but only thing that is sure is I am practising with the best I have, and I am going to compete with all I have.”

He was the first of the ‘big four’ to open his US Open campaign in New York this year. He played 21-year-old American Ryan Harrison, a man ranked at 97, and it showed. Nadal broke the American’s opening service game, enough to claim the first set. After a short delay as the humid air dropped some spatters of rain, he broke in the second to lead 3-1 and again in the seventh to serve out the set, 6-2.

The No2 seed raced to a 4-0 lead in the third and closed out the set and match, 6-2, in a little over two hours. Despite almost as many errors as winners in his stats, what stood out again was his increasingly effective, indeed excellent, net game. He won 25 points from 31, more than a quarter of his points.

He was satisfied, though no more, and made a particular point of mentioning his volleys.

“At moments I think I played well with my forehand. I was able to go to the net a few times, even if I lost a few times when I go to the net. That’s the right thing to do. Even if I lost a few ones at the beginning, I was able to keep doing and having success later. Yes, I didn’t have a lot of breakpoints against me during the whole match—that’s always a positive thing. For the rest of the match I was comfortable with myself.”

If there is one good thing to come out of Nadal’s long absence, it must surely be the evolution of his game into something more exciting, something that mixes his former strengths with new ones. His opponents, though, may be less pleased: the Spaniard is once again a very daunting proposition.